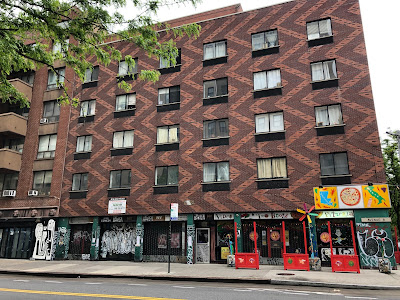 Updated 5/11: The CB3-SLA committee voted against this applicant's plans as presented, instead offering stipulations that Marcello Assante can only serve food-dinner during the films — not before or after, thus doing away with any necessary revenue to keep this operation viable. He plans to return to CB3 next month. We'll have more about this in another post.
Plans are in the works for a cafe-cinema at 44 Avenue A, the former home of the Upright Citizens Brigade Theater's East Village outpost, UCBeast, as well as the Pioneer Theater.
Marcello Assante is on tonight's CB3-SLA agenda for a liquor license for Cinema Paradiso, a cafe-theater concept for the space here at Third Street adjacent to Two Boots. (Questionnaire here.)
Assante, a Naples native, has owned and operated a handful of restaurants through the years, including Bella Ciao, Capri Ristorante and Marcellino in Little Italy as well as Local 92 on Second Avenue. Assante has also been involved with the film industry in Italy, having worked with director Abel Ferrara.
The space on Avenue A, which is already equipped with a movie screen, stage and theater seats for 119 people, seems perfectly suited to Assante's vision of creating a "big cinema culture" — a cultural center for cinephiles to enjoy foreign and independent features.
"My big love is cinema," he said in a recent phone call.
Aside from new indie and foreign releases, he's also exploring hosting film festivals, premieres and live events, such as director Q&As, similar perhaps to, say, the Metrograph on Ludlow Street.
Cinema Paradiso will also include a cafe for people to have a pre- or post-film meal and drink. At the moment, he's not sure if he'll offer in-theater table service, such as at Alamo Drafthouse and the Nitehawk Cinema in Brooklyn or the iPic Theaters at the South Street Seaport. The cafe portion could be a standalone restaurant such as the Commissary at the Metrograph.
"We need a liquor license to help support the rent, which is very high," Assante said. Would he move forward if the Community Board nixes the license? (UCBeast, the previous tenant, did serve alcohol.)
"I don't know. We are trying now and we will take it from there," he said. "We are here for cinema and culture."
The business name, Cinema Paradiso, comes from the 1988 Italian drama that won the Academy Award for Best Foreign Language Film.
"I'm Italian... 'Cinema Paradisio' is like my story," Assante said. "It's very personal. I was 8 years old and watching movies."
Citing financial woes, the Upright Citizens Brigade closed this theater in February 2019 after eight-plus years. UCB had taken over part of the expanded Two Boots empire — the video store on Avenue A and the Pioneer Theater with an entrance around the corner on Third Street.
The single-screen Pioneer Theater, which featured indie, underground and cult fare, closed on Nov. 7, 2008, after eight years. As owner Phil Hartman said at the time: "[I]t was always a labor of love and never commercially viable." 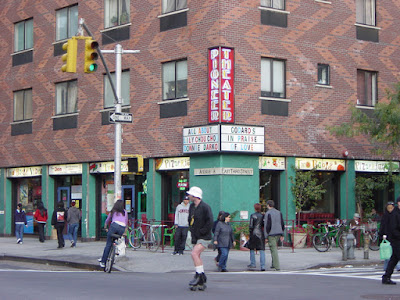 [Image from 2002 via Cinema Treasures]
Tonight's virtual CB3-SLA committee meeting starts at 6:30. Find the Zoom link here.
Previously on EV Grieve:• UCB East has closed; what's next for their space on Avenue A and 3rd Street?
Posted by Grieve at 5:30 AM

What a wonderful concept that would be such a perfect use of the space. Here's hoping they have no problem getting a liquor license. Our neighborhood is going to be back better than ever soon

Good but do a small cafe with beer and wine. Let the patrons go out to our existing restaurants and bars.

Looking forward to it!!!!

I hope this happens. A slice of Two Boots, a cocktail and a movie? C'mon CB3, this is a no-brainer.

This is awesome! Good luck with CB3!

Sounds like an awesome concept can wait till it opens

Does anyone remember the "cinema" and theater on 11th St between 1st and 2nd, with the bleachers seating? What was its name? That was good old days EV at its best!

This sounds like a great concept and a fantastic addition to the neighborhood! Best of look, I'm looking forward to seeing a movie with a beer there soon!

I remember that theater on 11th st! Cannot recall the name though. I saw Revulsion there and a few others films.

I love this concept and proposal. And cinema-phile (and CINEMA PARIDSO-file) that I am, I would go there often to see films and support this nostalgic endeavor. I hope it all works out Yay,

I saw the sign the other day but wasn't sure whether it meant an actual movie theater. What a great idea.

Now this would be a dream come true!! Bring culture back to the hood !!

Agreed. Go even further and close some bars to add another small theater or two to the hood.

Well, this is just delightful. Thanks, EVGrieve, for sharing such wonderful news!

That's it! Thank you.

Incredible news - we could use a 'Metrograph'-esque theatre. Wouldnt mind a Scarr's around Avenue A either...

Recall walking by Rififi one weekday late-afternoon and a woman was doing burlesque/go-go dance in the window.

What a dream! A local cinema run by an Italian who is buddies with Abel Ferrara, yes please. I'll have wine with that. Cinema Paradiso indeed.

I have zero incentive to support bars in our booze soaked neighborhood, but I will support a movie theater that actually contributes to something other then bar-owners’ wallets.

As the leasing representative for the owners, we have turned down bar after bar and club after club looking to destroy the theater and find this to be the latest example of this community board being completely out of sync with the area...

If you’re living in the area, please write to the District Manager of the CB and the Borough President of Manhattan and let them know your feelings on this matter...

Please approve this. The puritans at CB2 must stop with their intolerant and unsophisticated tastes and attitudes. This would be a treasure in our neighborhood. Who are these people in CB2?

CB denied similar permit to Sunshine Cinema on Houston, which meant they couldn't survive, and they didn't. Look what we've got a'buildin'
now...a useless "office bldg."
Cui bono, as they say in Latin. Who benefits by denying Marcello Assante a sustainable business model?

doubt this license would be a problem compared to the bars taken over our streets and sidewalks, blocking pedestrians., being annoying and noisier than ever.

I'm curious to see how this works out.