Another Tony's Pizza for the East Village, this one for the former Vinny Vincenz space 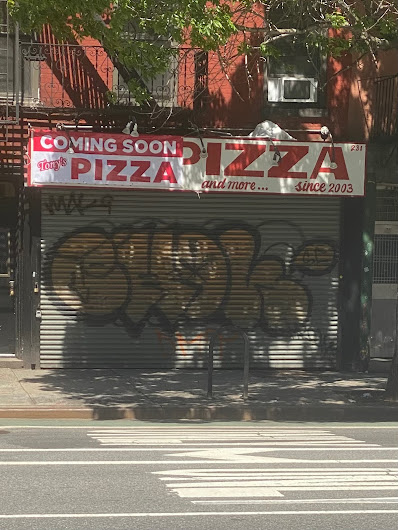 A coming soon banner for Tony's Pizza now hangs on the front of 231 First Ave. between 13th Street and 14th Street. (Thanks to Steven for the pic!)
Tony's will be taking over the space from Vinny Vincenz, the 18-year-old pizzeria that quietly closed last month — much to the dismay of its regulars.
And this marks the second Tony's Pizza to be arriving in the East Village ... signage showed up outside 128 Second Ave. between Seventh Street and St. Mark's Place earlier this month... 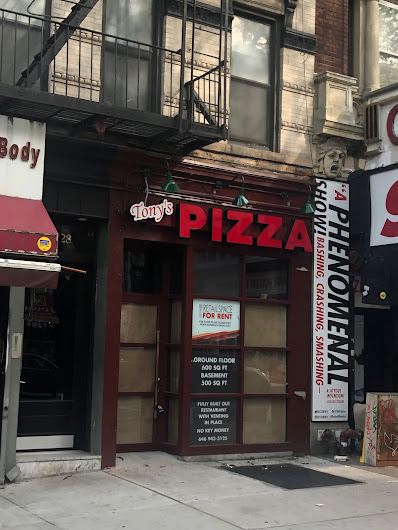 This outpost is taking over from another pizzeria — Nolita Pizza left last June after a year for a newer outpost down on Kenmare Street.
Still no word about who this Tony might be. There was some speculation (or perhaps hope?) that this might be related to the Tony's out on Graham Avenue in East Williamsburg, though the logos don't match up. (We messaged them to ask anyway.)
Posted by Grieve at 5:01 AM

It's obvious whomever Tony may be that he leases former pizzerias to reopen under his name. I doubt this is the same Tony who operates a shop in Brooklyn.

Speaking of pizza, did Black Seed on First Avenue quietly discontinue their pizza operation or did I miss an announcement?

Black Seed moved their pizza to their Brooklyn location. In the future they will offer pizza back in the East Village location, but not right now.

Believe it was just a temporary collab