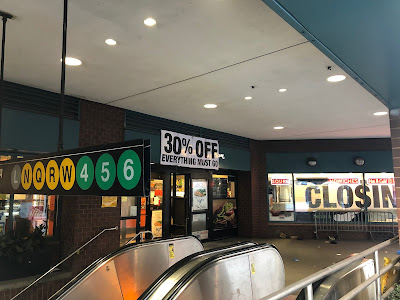 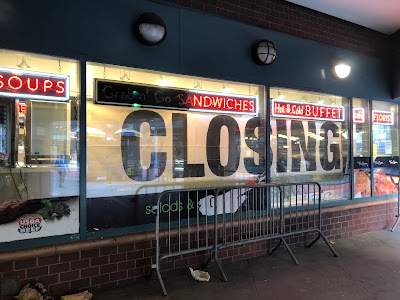 As we first reported back in March, this location will close on May 30, according to a WARN notice filed on Feb. 25 with the New York State Department of Labor.
The WARN filing says that the Food Emporium lease is expiring. The closure will impact 50 employees, per the notice.
For now, everything in the store is 30 percent off. (And if you are looking for a Coinstar replacement.)
What's next for the Food Emporium space? In February 2020, Lois Weiss at the Post reported that Target signed a lease for the 32,579 square feet here on 14th Street. At the time, the Food Emporium was said to stay here through the end of April 2023.
Sources told Weiss that, despite the wait, Target wanted to lock in the location along 14th Street. The nearly 16-year lease had an asking rent of $183 per square foot, she reported.
In December 2015, Key Food acquired the Food Emporium banner name and related intellectual property assets, per published reports.
A few blocks away, Chef's Local Harvest, a 10,000-square-foot grocery store, is opening early next year in the former Associated on 14th Street between Avenue A and First Avenue.
Posted by Grieve at 5:20 AM

That whole area does not have a regular
supermarket.

Traders Joes and Whole Foods are there, but you still need
a regular supermarket.

Whole Foods is a regular supermarket for a certain demographic.

I'll go on a limb and say people in that neighborhood eat out or have servants. Its not like its a family neighborhood. The EV will look like this very soon - they never ending "gentrification" (aka soft genocide) has resulted in only wealthy (or children of wealth) transients living here and they don't do anything without a masked anonymous servant to chew their food for them.

You can be that servant ;)

That's quite a limb, anonymous. The many neighborhood families and elderly people shopping there for as long as the store's existed weren't sending their "servants" to wait on the checkout lines to pay with food stamps. I'll go out on a limb and say you really shouldn't stereotype an entire neighborhood. No families? We all have servants? Ha ha ha and NOPE.

Before people run wild with claims that the city is dying because we're losing New Jersey-style megamarkets, what the city needs is a different kind of grocer model. We need more fresh foods, less packaged meats, and far less shelf-stable processed foods in our diets. A big reason why I didn't find Food Emporium all that useful (and this goes the same for the long-gone one at 31st and Third) is because most of the store is the stuff on unrefrigerated shelves. The mid 20th-century supermarket model has just way too much junk food on the shelves, and this was entirely a post-war industrialization development. Convenience foods are the descendants of WW2 army rations. Lots of stuff in these supermarkets have way too much sugar and salt in it - even Whole Foods is leaning that way lately.

We don't have a solution to this right now. What counts as wholesome fresh-food-to-go is way too expensive for many people.

I doubt they'll keep the doors open until the 30th. I stopped in yesterday and the shelves are pretty empty. Also, check the dates on what you do buy - I almost bought expired meat.
I'm going to miss it so much.

Lol cost of living in East Village is way cheaper than other parts of Manhattan. What are you smoking?

People from other parts of Manhattan come to east village often to eat because of the food and drink options. This is a clown comment

I guess my neighbors and I forgot to have servants, since everyone I know shops in Food Emporium for themselves, including my 92-year-old neighbor.

And the 92-year-old neighbor (who lives very near 3rd Ave.) is not going to be helped much by a big supermarket over in the Associated space east of 1st Ave.

I hate what this neighborhood is becoming. For such a long time it was a REAL neighborhood - one where people moved in & stayed for many years & cared about their block - and knew their neighbors up & down the street.

Now it's mostly "party-time!" superannuated college-types who pay insane rents and who seem to feel that overpaying entitles them to piss (literally & figuratively) all over the place.

servants? what a whackadoodle.

Not taking a side here BUT do you remember what it looked like in the 70’s and 80’s?

Welcome change. That place was a ghost town and a melting wax museum

Gentrification is a pervasive phenomenon throughout the country and it's no stranger to New York State, let alone New York City. People who love the countryside environment are now feeling the heat that city slickers are turning their quaint towns into Micro-NYCs. Bad enough, seeing throngs and throngs of visitors from NYC crowding your beloved Main St and the park by the Hudson River especially on a weekend.

Before the renovation? Crazy!

I agree with one of the commenters. And I am probably going to get a lot shit for it. But oh well. Here's my two cents. Yes. We all need to welcome change at some point in our lives. The Food Emporium was rather depressing if I am being frank. It felt like being trapped in the suburbs with lukewarm staff who didn't wish to be there. I experienced great difficulty locating many an item when shopping there, which wasn't often. Our city is constantly evolving whether we like it or not. Numerous businesses I patronized and enjoyed in the EV permanently closed last year due to the financial burden of COVID. As sad and disappointed as I was, I had to accept it. What can any of us do? Absolutely nothing! The impending arrival of Target could be a positive change for our community. I am saddened to see the loss of work for those whom were employed here, but at least they can benefit from our state's unemployment system until they secure something better, which to my understanding is pretty generous as of right now. And no. I am not a millennial. I am Generation X. Have a good day :)

tbh this place sucked. and westside markets are overpriced. the groceries to weep for were the associated’s on either end of 14th street. now those were reasonable, of the people and for the people. a shame. maybe the city needs to incentivize grocery favorable spaces? i dk. in the meantime, is this mini target going to be like the tribeca version? anyone know??

It’s sad to see another Target moving in but I don’t see any other retailers like them getting into the urban markets. Guess there is K mart but it’s been on the decline for years. I’m not championing for more big box stores but you think someone in this city would be able open and proliferate neighborhood centric co-ops for food and home goods that could at least give people an alternative to nationwide chains.