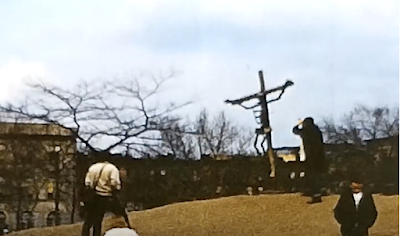 My dad shot these videos. We were all going to Easter Mass at Most Holy Redeemer then to Nana Julie's and Grandpa Walter's for Easter lunch. We were waving to my Grandma Anna in the window. Others on the street were are family friends and neighbors all getting together for Easter.

The hippies had moved into the neighborhood and basically took over the Park. On Easter, they built their version of the crucifixion with human skulls, etc. It didn't last long as some of the local guys knocked it down because it upset their wives and mothers.

The street-front store is next to the Chic Choc bar [now Sophie's]...it belonged to Willie Silverman. He and his son Sidney bought closeouts from department stores and wholesalers. Every night the neighborhood would gather in front of his hole in the wall to see what crap bargains we could get. These were great times!"

I remember that little mountain but not the cross. Nice video from the past.

I was 5 years old and lived on 5th between 2nd and 3rd at the time. The same age as those little ones.

We, of course, didn’t celebrate Easter but those street scenes and the children in their finest are so reminiscent of the time. I remember being put in an itchy suit to visit my grandma and grandpa in the Bronx.

And of course shouting up to someone looking out a window is truly so New York.

Really enjoyed that. I recently transferred all my father's home movies from the 40s and 50s, and this felt like it could have fit if his efforts had continued. Classic footage. Thanks.

Great to see old films like that. My father has a ton that his uncle shot on 8mm which show the whole neighborhood here during the 50s and 60s. I've got to figure out how to transfer them someday.

WOW!! What a great little piece of history. I love how 5th and A look different and the same! Thanks for sharing!

Thank you for sharing. This reminds me that MOMA has an exhibit on home films through June and it includes footage from a Howard Guttenplan of Tompkins Square Park around the memorial day '67 incident and the Dead concert.
I want to know more about the dirt mound in the park though.

What a trip! Thanks for sharing, James.

just wonderful. And those little fancy coats and hats! so cute. I used to live on that block on 5th between A + B and recognized my old building. thanks for sharing!

That's when mostly traditional families were living in the hood. No transients back then.

Cool to see the neighborhood back then, though, as a woman, I am glad I didn't grow up in the 1950s. That era is not at all appealing to me.

The building that Sophie's is in (No. 507) has been in the same family since day 1. There's a photo in the bar (under the TV) of it when the building was brand new (1906, I believe). A bar has always been in the storefront space.

@ Mykola Mick Dementiuk: I thought the "little mountiain" came to be called "Hippie Hill…or maybe I'm thinking of a different hill in the park?

This footage is wonderful, because it solves for me the mystery of what those buildings on 7th street between A and B really were; my deceased roommate occasionally said he had the feeling they had been tenements that were renovated with a unified front, because he had visited Rod Faber—another deceased East Villager—when he had lived there, and the apartments seemed to be pre-law tenement flats. And so they were!

In any event, this little film is just awesome from beginning to end; thank you for posting it.

Corner of 5th and A ...my family's pharmacy until the 1970s and the "candy" awning for hy and lils luncheonette ...thank you for sharing.

A friend sent me this link and I'm happy to see this footage that includes my 1966 Crucifix performance event in Tompkins Square Park. I did this publicly for 4 consecutive years on Easter Sunday (the still photo is from 1967). It was my personal statement about man's inhumanity to man and my opposition to the war in Vietnam. The mound where I placed the sculpture was nick-named Hoving's Hill (after Thomas Hoving, the Parks Commissioner who started but never finished construction work in the park). More info about the Crucifixion performances is here: https://joeyskaggs.com/works/crucifixion/.

Correction to my comment! Sorry! The photo is not from 1967. I think it's a still frame from the home movie. I was mistakenly referring to another "Crucifix" photo sent by the same friend, which is from the "Be-In" in Central Park in March of 1967: http://jeffersonsiegel.com/project/freedom-of-expression/2/ (scroll to the last image)