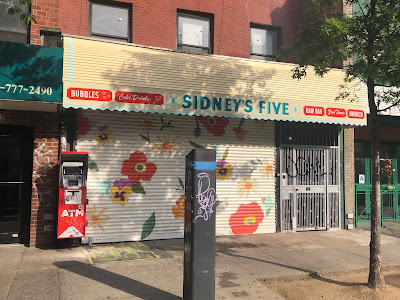 Sidney's Five recently opened at 103 First Ave. between Sixth Street and Seventh Street... in soft-open mode since May 15.
The principals here include David Lowenstein, who also runs the cafe-deli Pickler & Co. in Midtown, Edie Ugot, whose kitchen experience includes EdieJo's in Brooklyn and the Spotted Pig and the Breslin Bar, and Kai Woo, who was behind the bar at Union Square Café.
For now, the restaurant is serving a variety of sandwiches and some salads, coffee, soda, etc. (They applied for a liquor license in March.)
Here's their temp menu... 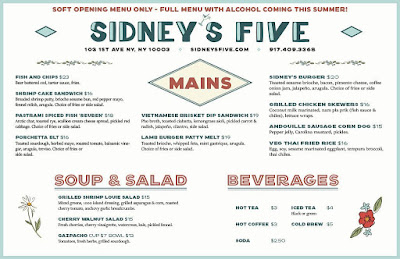 You can find more details on the Sidney's Five website.
They are open from 5 p.m. to ? Tuesdays through Sundays.
Ugly Kitchen closed here last year after nearly nine years in business.
Posted by Grieve at 5:02 AM

Not Boar's Head but still quite expensive for a sandwich. They look delicious -- but I'm game only if they're large enough to get 2 meals out of.

11:25 Still pretty expensive for US

I see the corn dog trend is sliding onto the menu. $15 corn dog.
Bravo

Somebody needs to explain what's wrong with Boar's Head. Good quality stuff, but not chic or trendy, I guess. Maybe if a sandwich made with Boar's Head were priced at $18, it would *become* trendy?

I like food to be delicious, and not a "lifestyle" statement.

Not affordable, not even to try once.

Certainly the ingredients and innovation in these sandwiches are worth the price, but like Unregular Pizza, the Wagyu beef kiosk on 5th St and the coming sushi-quality fish market, the average person on the street in the EV can’t afford this on a regular basis. Maybe Chelsea Market or Hudson Yards would have been a better location. Or maybe there will be enough trust fund babies returning to NYU in the Fall.

No, seriously, what's up with all the Boar's-Head shout-outs?

If you build a sandwich, they will come.

Seeing today that the new 7th St condo has apts selling from 1.35 million to 8 million, this menu does speak to the new EV. Too bad we are running out of affordable options for the rest of us.

I’ll try it because Pickler & Co. makes great sandwiches. They’re less expensive than these but a lot less complex.