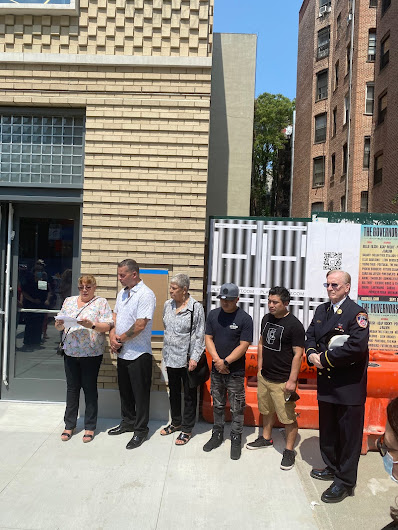 Family members of Nicholas Figueroa and Moises Locón came together outside 121-123 Second Ave. yesterday morning for the dedication of a memorial plaque in honor of the two men who died here during the gas explosion on March 26, 2015.
Retired (2017) FDNY battalion chief John Dunne joined the families ... Dunne, the third-highest-ranking member of the FDNY at the time, was part of the massive response to the explosion that leveled three buildings here at Seventh Street. 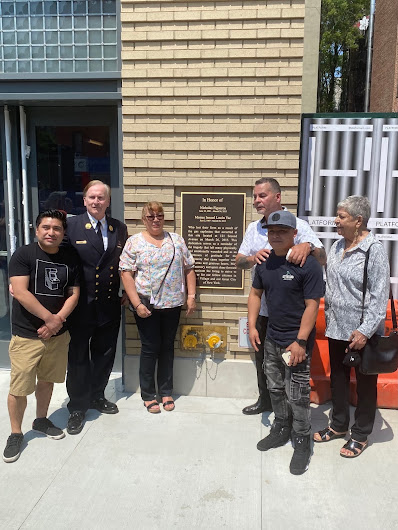 State Sen. Brad Hoylman, City Councilmember Carlina Rivera and her predecessor, Rosie Mendez, who was in office at the time of the tragedy, were also on hand to pay their respects to the family members.
The Village Preservation advocated for the inclusion of the plaque here on the new residential building at 45 E. Seventh St. 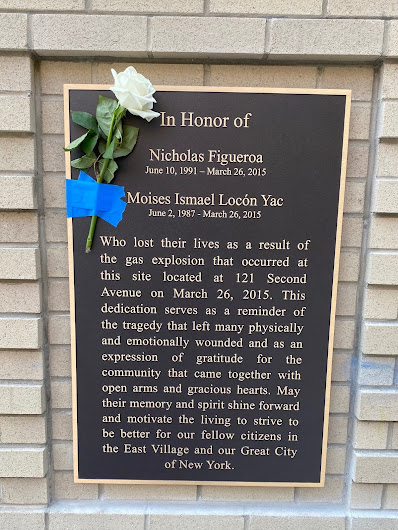 Thank you to Steven for the photos
Previously on EV Grieve:
• RIP Nicholas Figueroa

just heartbreaking. RIP bright young men, andd condolences to the families. thanks to the village preservation for advocating and thank you grieve & steven for covering.

Oh man. This makes me want to cry. So so sad. I am assuming the young man standing with arms crossed in his black shirt is the brother of Moises; they look like twins! I remember how awful that day was. I was down the block when it happened. It's difficult to imagine it was over six years ago. Those families will never be the same again. I really hope justice is served for Nicholas and Moises. What a lovely plaque!

Why? What does he have to do with this? There a dozen dedications like this one every year, I've never seen any mayor at any.

I'm really curios to know who has profited from the land sale.

Watch politicians who do NOTHING for their community pop up at somber events like this one to make some political hay....