The remains of the Gem Spa can now be found in homes (and a barn) across the U.S. 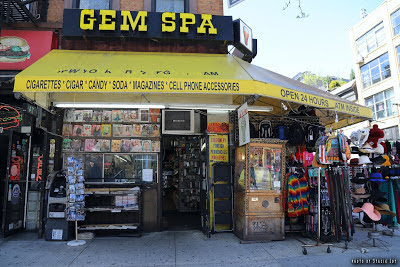 Gem Spa closed just a little more than a year ago on the corner of Second Avenue and St. Mark's Place.
Parul Patel, who had been running the store that her father Ray owned since 1986, made a gallant effort to save the iconic corner shop that dates to the 1920s. However, whatever financial progress she was able to make was not enough to overcome a global pandemic.
Late last year, Patel auctioned off the Gem Spa's sign, rolldown gate and other miscellanea.
At The New Yorker this week, Michael Schulman tracked down the owners of these Gem Spa relics.

Jason Sheehy nabbed one of the big yellow storefront signs (seventy-five hundred dollars), plus a milkshake machine (three-fifty). Sheehy lives on a grain farm in Ohio, but "the East Village has always just been my jive," he said. Both items will live in his nineteenth-century farmhouse, part of which he has turned into an Irish pub, furnished with a bar and stools from O’Lunney's Times Square Pub, another pandemic casualty.
Diana Goldfeder Stewart, a graphic artist in San Francisco, bought an egg-cream sign for her kitchen (three thousand dollars). Her family operated the store from the twenties through the fifties, when it was called Goldfeder's. She grew up hearing stories about her great-grandfather Nathan's chocolate-sauce recipe. ("He served what was called Goldfeder's Famous Egg Cream.") Like a lot of Gem Spa fans, she was anxious about what will replace it. "That corner — it's a magical corner for so many people," she said. "It can't be just nothing there."

As this photo from yesterday shows, nothing is here for now. The storefront is on the rental market. 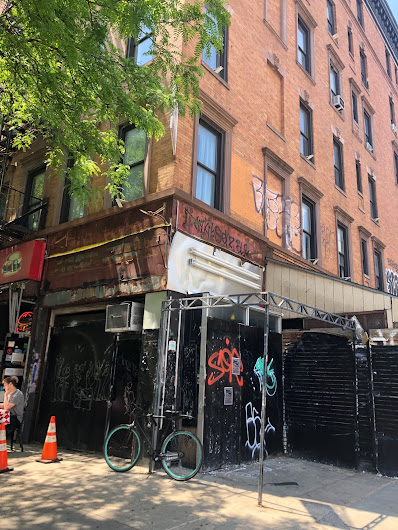 Still breaks my heart when I walk past.😢

“Wouldn’t it be great if we just closed it down and no one made any money?” - NY Land Owners

Instead of having an iconic place there, we see another landlord who forced a business out. Now the landlord has an empty space - and what does the landlord have to show for it? NOTHING!

The landlord still has the property and that ain't nothing.

The only thing constant in NYC is change. It is was what it is. And though not one of Andy Warhol's famous quotes, but it should be, "Death means money."

It's a pretty small space so it will be interesting to see what kind of business rents it. Maybe it opens up in the back? I would love to see another corner store in the space.

Just so hard to run a small independent storefront in NYC. Gem Spa used to have a lot of magazines and newspaper sales before the internet killed print sales. Cigarette sales probably were hit in the last 20 years too with Bloomberg antismoking laws.

The sick thing is that the landlord can write off "loss of income" from the GEM SPA space THEY caused to become vacant!

Potential tenants should be alerted that they will be BOYCOTTED if they take that space.....

Anyone know where Jason Sheehy's Irish pub is in Ohio? Love to go see the old yellow GEM SPA signs there!

one more smoke/vape shop, selling hats and sunnies on the side, sigh.