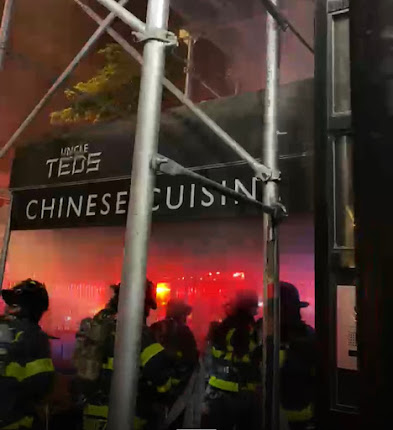 Several EVG readers have asked about the strong smell of smoke in the neighborhood early this morning ... wondering if there was a fire in the East Village.
The fire was further to the west. The @FDNYalerts Twitter account first reported the fire at 12:36 a.m. at 163 Bleecker St. between Sullivan and Thompson.
It eventually became a 5-alarm fire, which the FDNY declared under control at 5:33 a.m. 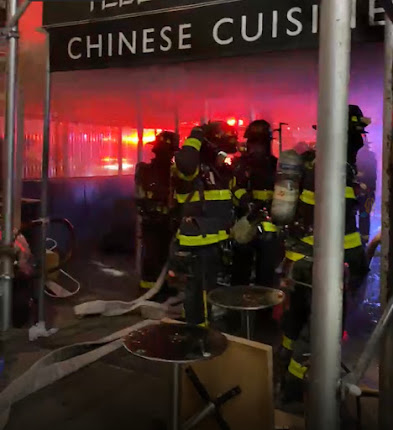 The Citizen app also reported that a firefighter sustained minor injuries.
A fire on April 19 on the corner of Bleecker and LaGuardia Place reportedly destroyed the storefront belonging to GMT Tavern.
Posted by Grieve at 6:02 AM

Smelling smoke at 3am freaked me out, deja vu to six months ago and seeing flames out the bedroom window as the church burned down a couple buildings away.

Went out on the street, some cops said it was people burning stuff in Tompkins Park, since put out. Guess not.

I feel for uncle Ted...and I had wanted to do pick up from them. This teaches us never to take things for granted. Take action and show gratitude when people and things are still there. ;(

Woke me up too. I wasn't sure if I was hallucinating. Thanks for the report EV.

Totally freaked and panicked me. Is that the old Village Gate building?

Uncle Ted is across the street from Le Poisson Rouge, which is in the old Village Gate space.

No way the smell of fire and smoke had made its way from West Village to Ave C. I go with the Tompkins park theory.