Trading places: Are you ready for some Unregular Pizza? 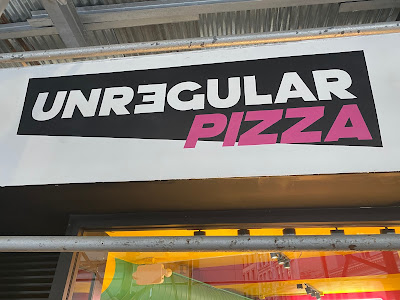 Unregular Pizza opens today at 135 Fourth Ave. between 13th Street and 14th Street. There was a friends and family sneak preview last evening... (thanks to Steven for the pics!) 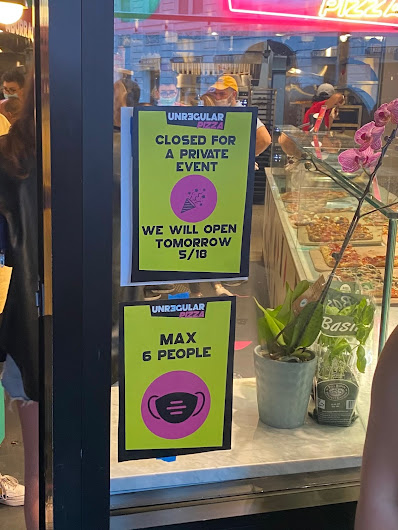 Owner Gabriele Lamonaca, who previously worked at EV restaurants Huertas and Cacio e Vino, made headlines earlier this year for his unique bartering system.
Lamonaca, who has wanted to open his own restaurant, started experimenting with his pizza-making skills during the pandemic. From his Harlem apartment, he whipped up a handful of pies every week and made them available via barter.
As the Rome native told the Post back in February, he didn't want to take people's money during such difficult financial times... so he traded his creations for everything from chocolate cake to chicken Milanese.

He said there's some historical precedent for bartering. During leaner times in post-World War II Italy, "My grandmother would bake bread and press olives into oil, and trade it to neighbors for eggs," he said.

Now though you can pay for the pies, which the Post declared the best in the city. You can follow the pizzeria on Instagram. It appears that Lamonaca will still hold some pizza barters. (Update: they will have once-daily trades.)
Hours: daily from 11 a.m. to 9 p.m. 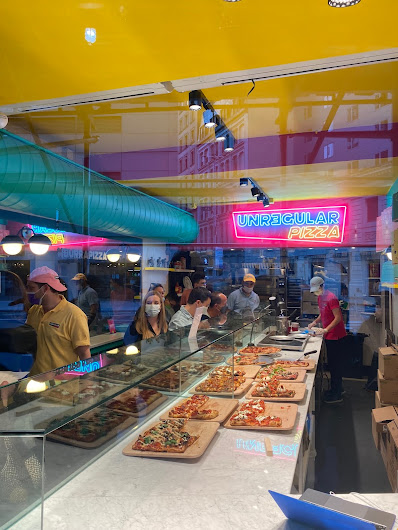 Door sign say max of 6 people, yet I count more than 6.
I was a math major so I know for which I speak.
Peace out peeps, math is Science and we believe in Science! Go get you a deliciousness piece of pie. A woop woop to all my evgrieve peeps. Evgrieve is my jam!
Every morning after my morning constitutional I read each evgrieve article to music that my brain creates. You see, I am a savant of some species or something. I love you all so much, you mean the world to me.

I've been following this guy throughout the pandemic and I'm very happy for him. He's super positive, engaging, fun and just comes off as a really nice guy.

I hope the restaurant does well, I look forward to trying to his pizza without having to barter for it! It's nice to see someone get a shot at success for spreading good vibes!!

Business owners might want to note that MANY of us do NOT use Instagram, b/c it's a FB-owned company. So, whatever this place is posting on instagram, I and lots of other people won't ever see it.

It's important for me to defy FB & its sleazy culture at every opportunity; this is just one more such opportunity.

I love this blog, every day or week you see someone who finds a new way to complain about something. Instead of just not using something you don't like, here you get to tell everyone one and feel important. Lovely.

love the neon and can't wait to try! thanks grieve!

I don't care about pizza but the color story and signage fonts here are 1980s in the best way. The neon is just beautiful.

@10:08am i'm not disagreeing with your characterization of fb/ig, but is there an alternative to instagram for them besides not using instagram? genuine question, not trying to poke a fight or anything.

reacting to anon 8:02: for the love of god, all businesses should have a website that they control. What would it do to your theoretical business if Instagram went away or changed radically? (myspace). Yes of course you have to do social media, but no way should you be exclusively on one platform. And the website should do more than refer you back to instagram, where your potential customers may not have account. Or they do, but once on the platform they get distracted by all the dings and pretty images and forget why they came there.

@2:18 You don't care about pizza? I understand not caring about religion or politics, or technology, or art or relationships or work or money or Kanye or people or personal hygiene, or grammar, or the weather, or neon, or fashion, or the economy and I guess the world in general. But Pizza? The two things I can think of that matter in this twisted world are good coffee and good pizza. (And if I had to I could drink a bad cup of coffee....)

@8:02pm on May 18th: Have you ever heard of a concept called a WEBSITE? Is there some *magic* thing IG does that a website can't do? Or is it all about being poseurs who want to attract other poseurs?

A good website can and should show what's for sale (food, drink, or other products) via a menu & photos, give pricing, and give business hours. Ideally it should allow ordering via the website. I purchase from MANY businesses in the East Village via their websites, and if they go IG-only, they lose me permanently.

I have noticed a couple of places that are both IG-only AND don't have a phone number. That's like wishing to put yourself out of business, IMO.

Websites cost money to run and you need a ux designer to maintain the website. You act like creating a website is super easy. Why do that when majority of folks are on IG and reach a wider audience? Most people would prefer to quickly search on IG and make a decision quick. You sound like an angry old person. Get with the times or hush.

EV Grieve - come for the comments, stay for the articles

@8:53pm: Websites ARE easy to create for *many* of us! The last one I did took me about 2 hours, total. But, of course, you have to know what you're doing. (BTW, I'm not angry, and I'm not an old person, either. I'm just a tech-competent person who chooses not to use IG.)

BTW, it's not true that the "majority of folks" are on IG; plenty are NOT and won't be, which is why business owners are dumb if they rely only on IG.

Thank you Grieve for the amazing article! ♥️ We do try to keep our maximum amount of guests to 6 🙏

Please do come visit us 🙏

Mmmmh... we are trying to communicate as best as we can! If you google UNREGULAR PIZZA there some articles that talk about us and they don’t necessarily reconnect to Instagram nor Facebook!