The Starbucks on Avenue A and St. Mark's Place has not been open lately 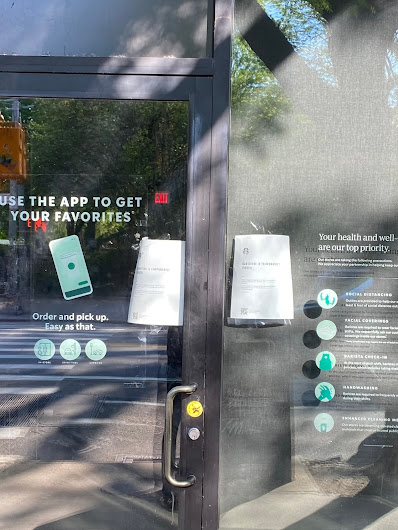 Updated: Reopened as of May 17.
Observers say that the Starbucks location on Avenue A at St. Mark's Place has not been open for the past 7-10 days.
Signs on the door simply note, "Our store is temporarily closed," with instructions to visit the nearest Starbucks. Calls to this branch result in an outgoing message stating, "your call cannot be completed at this time."
While two neighborhood Starbucks outposts have closed in recent years (Second Avenue at Ninth Street, Broadway at Ninth Street), this isn't believed to be a permanent shutter. This location has been closed from time to time, like in July 2019 for an electrical issue.
Starbucks opened at this spot in August 2017.
The previous tenant, Nino's, had to close on Oct. 21, 2015, due to a gas leak in the building. On Nov. 17 of that year, Nino's received an eviction notice. Owner Nino Camaj had said that the gas was shut off in the building without any notice to him.

In late November 2015, Camaj's lawyers were reportedly talking with landlord Citi Urban Management to dispute the rent charged for the month during which they weren't open due to the gas leak. Camaj still had 10 years left on his lease and had been in court with the landlords.

He accepted a buyout in February 2016, after having been closed for nearly five months. Camaj told DNAinfo that he could no longer afford the $14,500 monthly rent.
Photo by Steven!
Posted by Grieve at 5:00 AM

A month or two ago, the branch at 15th and 3rd had a similar flier posted, and remained closed for a couple weeks before reopening. No indication of the precipitating issue, though a previous instance, iirc, had something to do with either the plumbing or electricity. Friendly staff at this one, btw, though I wish they'd keep the music a little lower.

Please close and turn it back into something neighborhoody! The people walking around with Sbux when C&B, 787, and Ninth Street are all right around there is infuriating

Oh booo on them! I for one find this extemely inconvenient. I used to visit this daily, the baristas would joke about how I look like a fat Audrey Hepburn. Starbucks is my second bestie or 2ndBff(in charge). Now I have to go to other starbucks for my double frap wasp cappucino half decaf caramel skinny with no whip and extra ice and a spash of cinnamon, and Daddy always has them put a big maraschino cherry on top!
My cup always says Audrey H with a big heart drawn around it. But not now, I had to purchase some coffee liquid from a bodega. As I left the boedgea and placed my lips on the cup so the liquid can go in, as I did this I tasted the liquid coffee then immediately spat it out. So sorry to the dog tied up outside. I then threw that nasty liquid away then en route to my executive office I called their corporate office and they will be opening this place up soon. As I entered my work building my doorman winked at me and said you look like a lady that is in need of THIS, and he handed me my perfect morning starbucks drink, with cherry on top and Audrey H, wriiten in beautiful caligrophy! What is going on, I am living in an alternate dream world where starbuvks, 2ndBFF is my guardian angel.

Ray’s sells coffee a block away. Get your coffee from Ray’s.

I will second that. I always go to Ray's when a coffee is required.

Starbucks can remain closed indefinitely for all I care.

Starbucks can be that Gap store that was so warmly greeted those many years ago. xo,jg

are the still using covid to be cashless?

Starbucks closing would help restore some nice locality to the Alphabet City area. Which will make the area even more popular thus attracting more basic bores things like Starbucks and other chains.

You want Starbucks? Fly to Seattle.

A bookstore would be so nice

A small unpretentious diner would be nice here.

You joke about book stores, but at least they have more neighborhood value since they're so rare. Starbucks isn't even a need, just pure vanity about coffee.