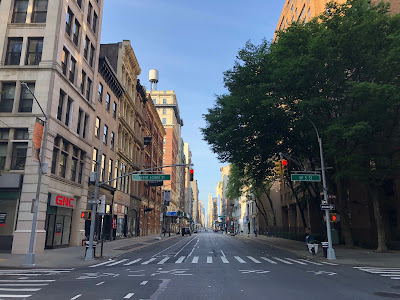 Local Assemblymember Harvey Epstein wrote the following op-ed.
With the Soho/Noho Neighborhood Plan pushed by Mayor de Blasio stuck in legal limbo and mired by community opposition, it's time we reevaluate upzoning as a tool for creating affordable housing.
In 2019, the Democratically controlled legislature partnered with advocates to pass the statewide Housing Stability and Tenant Protection Act (HSTPA), the strongest tenant protection in decades. The bill closed many of the loopholes that led to a loss of affordable housing over the years preceding, especially in "high opportunity" neighborhoods in Manhattan.
But now, the de Blasio approach of upzoning –– changing the existing zoning to allow for more height and density –– undermines the work we did to protect renters in the HSTPA by incentivizing the demolition of existing rent-regulated affordable housing, one of the few ways rent-regulated units can still be lost.

Upzonings imperil small older apartment buildings, which suddenly become vulnerable to demolition when an upzoning incentivizes their replacement with new buildings two or three times the size or more. Older, smaller, affordable buildings could be replaced with new buildings required by mandatory inclusionary housing to offer rents as high as 75 percent market rate. It's unlikely many current tenants could afford a unit in the buildings that would be allowed due to an upzoning.
Today, every day New Yorkers foot the bill for three units of luxury housing for every one unit of not very deeply affordable housing, often in wildly out-of-scale new buildings that may be replacing existing affordable housing and residents. It’s a bad deal for New Yorkers.
The need for a more affordable and equitable city is especially great right now, and every neighborhood needs to take part in that effort. We should eliminate as-of-right development and require all new residential developments to designate a greater than 25 percent share of units as affordable. Linking affordability and upzonings forces a false choice. Affordability shouldn't be dependent upon upzonings, which inherently endanger existing housing in neighborhoods, including affordable housing with longtime and often lower-income residents.
We should also be directly subsidizing and funding the construction of truly affordable housing in NYC that doesn't depend on the whims of the market and private for-profit developers all across the city, not just in less well-off neighborhoods.
With these policy changes, we can protect existing affordable housing, create new affordable housing, and do it in a way that’s compatible with neighborhood character and doesn't create a flood of new luxury housing that does more harm than good in terms of making our neighborhoods equitable, affordable, and diverse.
Assemblymember Harvey Epstein represents the 74th District, which includes parts of Manhattan's east side.
Posted by Grieve at 5:30 AM

Good OpEd Harvey! Definitely a path forward to consider better housing in the city. Especially with the selection of mayoral candidates most of which probably want to continue the DeBlasio luxury building boom hellscape.

This is extremely disappointing from Harvey––SoHo and NoHo's current zoning does not allow for housing, period, which means that demand for said housing has to be satisfied in all the surrounding neighborhoods, pushing up rents. By contrast, upzoning in SoHo and NoHo––two of the wealthiest neighborhoods in the country––would put that process into reverse, helping to put downward pressure on rents and displacement in the East Village, Chinatown, and Lower East Side more broadly. It's outright strange to see him taking a position that will only benefit loft owners in SoHo and outright harm many of his constituents.

The most unaffordable and segregated housing in the nation exists in New York City and San Francisco. Both are the most heavily regulated realty markets in the country. Anyone see a connection?

"This is extremely disappointing from Harvey"

Well Will, just about every true affordable housing organization is dead set against this SoHo up zoning (and other hoods as well) but hey, you have your POV. BTW, what is your POV on the HSTPA? Pro or con?

BTW, this so called "affordable housing" % is one of the biggest REBNY/RSA scams that has been accepted by BdB and most the CC. Sad.

"The most unaffordable and segregated housing in the nation exists in New York City and San Francisco. Both are the most heavily regulated realty markets in the country. Anyone see a connection?"

Well I guess no use asking what your opinion of the HSTPA is.

Pretty rich coming from someone who introduced legislation that would undermine HDFCs...

"Pretty rich coming from someone who introduced legislation that would undermine HDFCs..."

This is a pretty broad statement, can you be more specific?......Oh wait, never mind:

"However, the shareholders and board members of these HDFCs seem to disagree, arguing that the bill would functionally make their homes into public housing once more.

“It is purposely designed to put our private homes under government control,” said John McBride, a member of the HDFC Coalition. “The ‘HDFC Ombudsman’ bill would require every HDFC co-op shareholder to pay a new annual fee to the government that normal co-ops are not required to pay…be deputized to enter our private co-ops to enforce the Private Housing Finance Law (PHFL), while at the same time Assembly Member Epstein, with his other HDFC draft bill described below, seeks to radically change the PHFL itself in draconian ways that HDFC shareholders strongly oppose.”

McBride also explained that the bill would enable corruption if passed.

“The bill would allow a so-called HDFC Ombudsman, working out of the NYS Attorney General’s Office, to outsource its work to unaccountable private contractors such as UHAB that helped develop Harvey Epstein’s legislation,” he said. “It would be a conflict of interest to award such a government contract to politically connected housing non-profits, and to give them the imprimatur of the Attorney General’s office. It is also highly problematic because such housing non-profits continually promote their other business services to HDFCs.”

Let me send this over to Harvey's office and get their POV. That being said, I always see see an issue where “It is purposely designed to put our private homes under government control,” is the main talking point.

It will be interesting to see what takes place related to upzoning whenever Beth Israel is sold, razed, and is eventually replaced by whatever.

Using zoning laws to restrict the growth of housing supply does not make housing more affordable. This is simple supply & demand. Anti-developer sentiment makes for an easy scapegoat, but actually impedes the growth in housing supply. There is a smart way to protect low income tenants and attach conditions to new development, and it isn't a simple ban.

Excellent piece! Real estate interests have figured out that they need a Trojan horse to get what they want, so "Resiliency" to tear down our parks, "Climate Center" to destroy Governor's Island with development,"Affordable Housing" for uncontrolled development, and a "Tech Hub" when all else fails. Glad to see we have at least one representative who sees through, and calls bs, on all this. Kudos to Harvey for being a true progressive.