Wednesday's parting shot of a Basquiat painting that just sold for $93.1 million 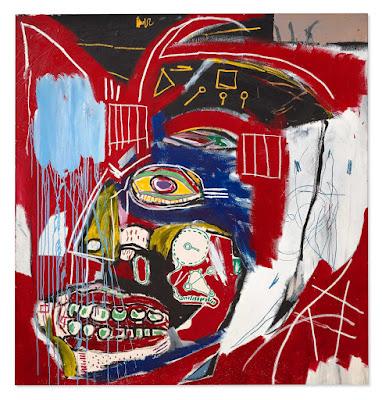 Jean-Michel Basquiat's painting titled In This Case sold for $93.1 million last night at Christie's.
The record price paid for a Basquiat at auction came in 2017 when another painting of a skull sold to the Japanese billionaire Yusaku Maezawa for $110.5 million.
As for last night, Bloomberg provides the play-by-play...

As the lot opened up to a salesroom populated exclusively by cameras and auction house specialists, Gemma Sudlow, a senior vice president at Christie's who was leading the auction, opened bidding at $40 million, and quickly brought its price to $52 million.

Soon, six bidders began to vie for the work, slowly pushing its price in increments ranging from $1 million to $3 million. After about six minutes of bidding, the nearly 6.5 foot-high (2 meters) painting hammered at $81 million. Auction house fees payable by the buyer added on another $12 million.

The painting was last purchased publicly in 2002, when it sold at Sotheby’s for just under $1 million. It then sold privately in 2007 for an undisclosed sum. The seller on Tuesday night, according to reports, was former Valentino chairman Giancarlo Giammetti; the buyer was not immediately known.

Basquiat died of a heroin overdose in 1988 at his home-studio at 57 Great Jones St. between the Bowery and Lafayette. He was 27.
Image via Christie's
Posted by Grieve at 9:01 PM

that's nothing - I just made half a billion trading evgrievecoin

I have to say, with regard to the whole East Village scene, 1988 was the right time to die. By 1990 the beautiful golden coach changed back into a pumpkin, and all the magic was gone.

When you're smoking weed all day and then decide to do a speedball and pick up the brushes.

I remember when $100 million was a lot of money. There was a time you could buy the Beatles' songbook for less than that.