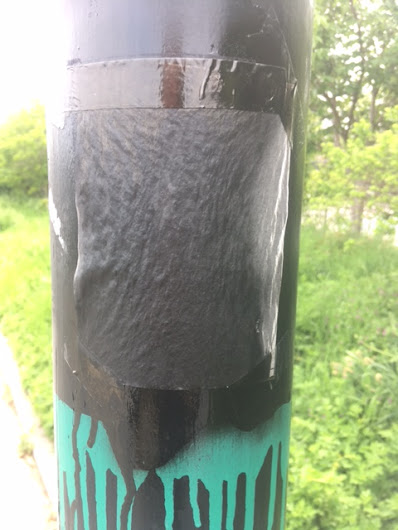 In recent days, someone has blacked out all the Save East River Park flyers along the waterfront... 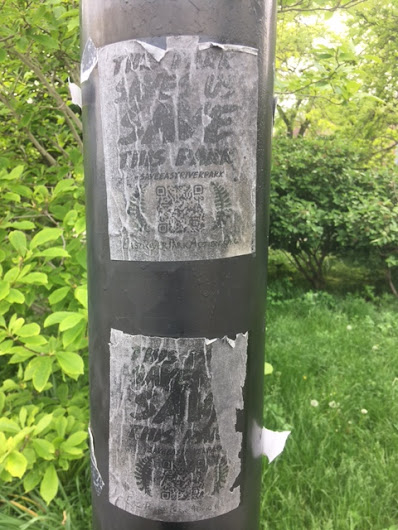 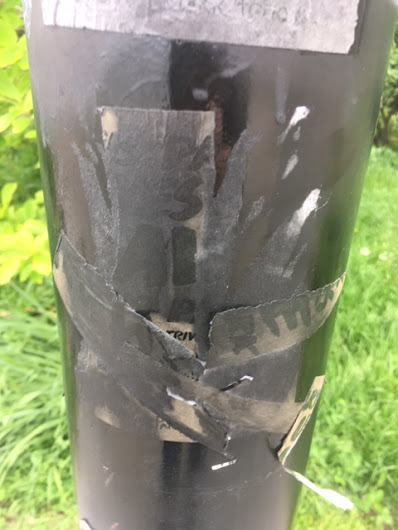 And apparently, this was more than a random act of spraypainting... EVG reader Robert Miner, who shared these photos, said every flyer from East River Park Action was like this from 18th Street down to the Williamsburg Bridge.
Opponents of the East Side Coastal Resiliency Project have been asking for a "real environmental review" of the $1.45 billion plan to protect the Lower East Side and surrounding neighborhoods from a 100-year-flood event and sea-level rise.
Opponents of the city's current plan — where workers will raze the 57.5-acre plot of land, bulldozing 1,000 mature trees and rebuilding the park atop eight feet of landfill — say there are better ways to preserve the park and provide flood protection, such as the one mapped out in the years after Sandy.
In late 2018, the city surprised community stakeholders by announcing a complete overhaul of a plan discussed over four years of local meetings.
Previously
Posted by Grieve at 5:00 AM

The toxic substance used to cover up ERPA's flyers looks like the toxic air quality we can look forward to for decades after the city commits arborcide of 1000 mature trees currently absorbing tons of carbon dioxide/day.

There's a lumber shortage, does anyone know whether the city is planning to sell East River Park trees to builders?

"Builders hope the worst of the lumber price spike is over"
https://www.msn.com/en-us/money/realestate/we-went-to-levels-previously-unimaginable-builders-hope-the-worst-of-the-lumber-price-spike-is-over/ar-BB1gTUM1

"in one year a mature tree will absorb more than 48 pounds of carbon dioxide from the atmosphere and release oxygen in exchange."
https://www.usda.gov/media/blog/2015/03/17/power-one-tree-very-air-we-breathe

Note sure what kind of person is resentful of efforts trying to save public parkland and chooses vandalism to express that sentiment. I wonder if this person is aware that the city is set to rip out 1,000 mature trees and obliterate the entire park over a redacted Study. More importantly why is this acceptable to Councilmember Carlina Rivera?

Probably done by the parks department. :(

It's the Parks Dept. staff that did it. We asked a Parks employee who was spray painting over an East River Park Action sign a few months ago--she said it was a priority order that came from the Manhattan Parks Commissioner or Chief of Operations. The Parks Dept. is very committed to the East Side Coastal Resiliency project, so signs protesting the burying East River Park are usually covered very quickly. That they have remained for several weeks is a record.

Some spotted an awkward middle aged man who stood 6' 5" spray painting this posters. His pockets were filled with cash from developers giving him the appearance of an jackass.

Gotta make a nice playground for the new Howard Hughes towers and their upcoming luxury replacements of the Ave D houses.

There's a wide walkway/service street on the edge of the park near the FDR, that would be so easy to elevate and place the walkway on top. No loss to trees or ammenities.

Then when the whole park needs another rehab in 25/30 years, then go ahead and elevate the whole thing. This is for a once a century flood. It's criminal to destroy the park now, after they spent a decade refurbishing it.

. . . can NOT wait to see how the proponents of this plan react when they see the vermin this stirs-up. Idiots will be disturbing waterfront ground that’s been untouched for years. The locals will be treated to rats with saddles on them . . . beside the other results. Simply my opinion.

Sad that this park and Governor's Island are being sold out by our local pols. We deserve better.

"hundreds of houses in Staten Island have already been demolished and replaced by wetlands as part of a New York state buyout program."

"Revitalizing wetlands is not an easy or inexpensive process. It can cost between $1.5 million to $2 million to restore just one acre of marshland. But according to the new analysis, these ecosystems are vital habitats for more than 325 species of birds, 315 species of plants and 200 species of fish and shellfish. Coastal marshlands also provide a crucial buffer from storm surges, reducing the impact of waves and flooding. Greenfeld says the team’s findings serve as a “shovel-ready menu” for building future wetlands."
https://gothamist.com/news/parks-department-conservationists-release-30-year-plan-protect-nyc-wetlands

"The Lower East Side Ecology Center (LESEC), a recycling, composting and educational organization, is planning to develop a wetland ecosystem in the East River Park. The proposal, likely to cost about $1 million, would use gravel and native plants to naturally filter water while also providing food and shelter for local birdlife.
"The wetland is really an opportunity to demonstrate alternatives on how to manage storm water or any dirty water," said Christine Datz-Romero, executive director of LESEC."
https://www.dnainfo.com/new-york/20130103/lower-east-side/1m-wetland-proposed-for-east-river-park