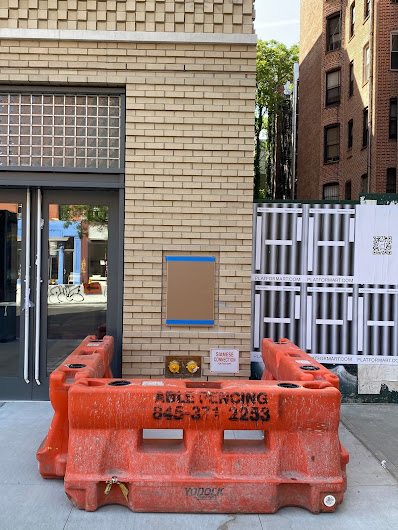 Workers yesterday installed the memorial plaque on the new residential building at 45 E. Seventh St. that pays tribute to Nicholas Figueroa and Moises Locón, the two men who died here during the gas explosion on March 26, 2015. (Top photo by Steven; photo below by Drew Heffron.)
We're told there will be an official unveiling this morning at 11. The plaque is on the Second Avenue side of the Morris Adjmi-designed building, where the residences range between $1.35 and $8 million. 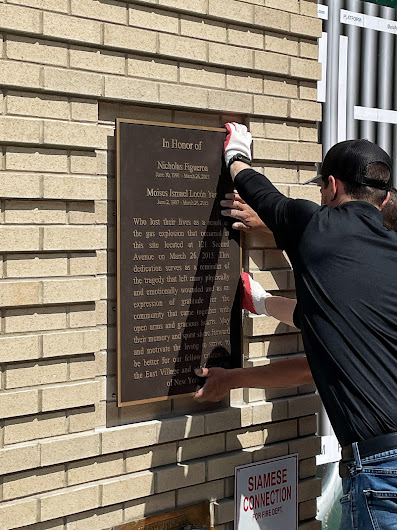 Figueroa, 23, who had recently graduated from SUNY Buffalo State, was at Sushi Park, 121 Second Ave. and the site of the fatal blast, dining with a co-worker. Locón, 27, worked at Sushi Park.
The explosion also injured more than 20 others and leveled 119, 121 and 123 Second Ave. (The new building sits on two of these three lots.)
In January 2020, landlord Maria Hrynenko, contractor Dilber Kukic and unlicensed plumber Jerry Ioannidis were found guilty of manslaughter, criminally negligent homicide and related offenses for their role in the explosion. They were each sentenced to four to 12 years in prison. Hrynenko is out on bail as she awaits an appeal of the case.

Prosecutors said that Hrynenko, driven by greed, and her cohorts rigged an illegal system to funnel gas from 119 Second Ave. to 121 Second Ave. to save money.
In October 2017, city officials unveiled new street blades that co-name this northwest corner of Second Avenue and Seventh Street after Figueroa and Locón.
Previously on EV Grieve:
• RIP Nicholas Figueroa

45 E 7th also has a rooftop terrace for leisure activities now that we're discussing quality of life issues in and around the EV.

I can't walk through this intersection without tears welling up. The loss of life, then later the loss of Middle Collegiate church. So much pain and sadness for this stretch of 2nd Ave. RIP Nicholas and Moises - you will always be remembered.

RIP to Moises and Nicholas, and I hope the plaque will be a source of comfort to their families.

These young men won't be forgotten by any of us who were here when this happened. The plaque will certainly be a reminder to me, every time I pass by, of the tragic loss of these young men's lives, as well as of the trauma to all the families who used to live at that location, who lost their homes (affordable homes!) and their worldly belongings.

But note well: Maria Hrynenko is STILL out on bail, and it would not surprise me if she continues to stay out of prison until she dies, thus having escaped the consequences of her actions.

I live on 7th and C and cross this intersection all the time. I always think of what happened on that terrible afternoon and the tragedy that befell on our community and especially the young men who needlessly died at the hands of greedy landlords. While this beautiful plaque doesn't bring either of them back, at least it is a tribute and honor to their lives. Perhaps this can offer some solace to the families left behind :(