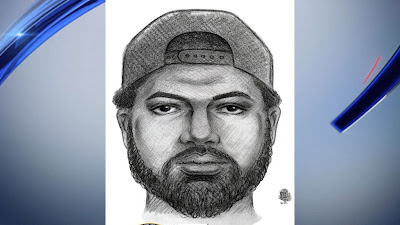 The NYPD has released a sketch of a suspect they say punched an Asian woman on the F stop platform on Second Avenue at Houston.
According to police, the attack occurred on April 28 at 6:40 p.m.
From the PIX 11 report:

A 47-year-old Asian woman was walking on the southbound platform when a man approached her and punched her in the face before fleeing, police said. The woman fell to the ground and sustained bruising to her face and head, leg pain and lacerations to both hands, police said.

No words were exchanged before the attack, according to police.

The suspect's description, per amNY:  "A 30-year-old man with a dark complexion, a full beard and short dark hair, standing 5 feet, 6 inches tall and weighing 180 pounds. He was last seen wearing a black hat, blue jeans and white t-shirt."
The NYPD’s Hate Crimes Task Force is investigating the attack.
Hate crimes involving Asian-American victims soared in New York City this past year. This Curbed post has details on some of the crimes.
Anyone with information that could help in the investigation is asked to call Crime Stoppers at 1-800-577-TIPS (8477). You may also submit tips online. All calls are strictly confidential.
Posted by Grieve at 11:00 AM

This is really fucked up on so many levels. The endless violence against the API community here in NYC, domestically, and abroad is disgusting and utterly unacceptable. I hope this POS is apprehended and formally charged without bail. As a white gay man living in NYC, I have felt powerless when drawn into unsafe situations by surprise outside a bar, walking on the street by myself minding my own business or on the subway with dangerous, hyper masculine straight men looking for trouble. I have had to find ways to escape to save my own life. The only way out of our present social and political climate is eradicating hatred and attempting to open the hearts and minds of others who are narrow minded, uneducated and ignorant. And to understand the root of it. Where does this stem from? Why? Perhaps I am being too idealistic here? My best to this woman. I hope she will be okay. It was such a violation. Given the great trauma she endured, therapy will most likely be a must in her recovery.