Can you Dig it? [Update: Postponed due to the rain] 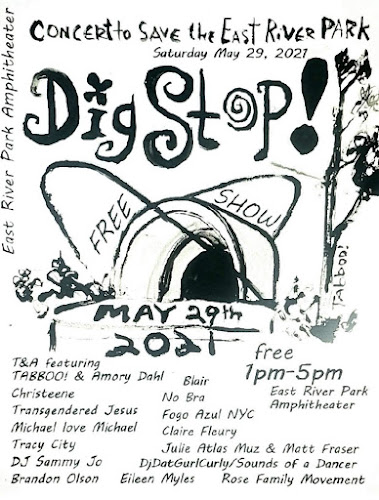 Update 5/29: The organizers have postponed the show to a later date given today's wind and rain...
There's a free show tomorrow (Saturday!) afternoon at the East River Park Amphitheater to help raise awareness of the destruction to come to the Park later this year.
Dig Stop! will bring together more than a dozen local bands, DJs and speakers from 1 to 5 p.m.
You can also purchase Save East River Park T-shirts and totes ... and bid on a mystery bag raffle with items donated by Patagonia. Proceeds go to the East River Park Action legal fund.
East River Park Action has been asking for a "real environmental review" of the $1.45 billion plan to protect the Lower East Side and surrounding neighborhoods from a 100-year-flood event and sea-level rise.
Opponents of the city's current plan — where workers will raze the 57.5-acre plot of land, bulldozing 1,000 mature trees and rebuilding the park atop eight feet of landfill — say there are better ways to preserve the park and provide flood protection, such as the one mapped out in the years after Sandy.
In late 2018, the city surprised community stakeholders by announcing a complete overhaul of a plan, part of the East Side Coastal Resiliency Project, discussed over four years of local meetings.
Previously
Posted by Grieve at 7:00 AM

Almost every day on NY1 there are news stories about new parks opening up all over the West Side and the other boroughs. Our neighborhood is the only one where a park is being taken from the residents.

Agree with the comment above - our neighborhood keeps having essential space taken away. Even Tompkins is suffering due to lack of staff and maintenance - look at how it's being destroyed and no one seems to care.

I wish they would take away the FDR instead. Now, that would really fight climate change. But no, in this backasswards city, green space is always the first to go...

Our Councilperson, Carlina Rivera, was the key vote to tear down the East River Park. Yesterday she voted to allow real estate development on Governor's Island. We need a representative who votes for our interests, not developers.

@12:45 I just feel like Carlina has not been clear or honest with her position. I emailed their office and asked for a statement on her stance for governor’s island, pricier to the vote. I never received a reply.
She votes for upzoning everywhere, votes to raze the east river park, votes to allow development on governor’s island (this vote was just yesterday). She allowed development for tech buildings near union sq and I thought she promised to keep it from happening elsewhere. I once strongly supported her but now I am definitely voting for the other candidate.
They care about these issues from the point of view of the residents that live in them. FYI Erin Hussein is on the ballot or a write-in.

Carlina wants to be mayor someday so she's licking the boots of big developers every chance she gets. I can't tell you how disappointed I am in her, she's not getting my vote this June

Rivera has been a bitter disappointment.