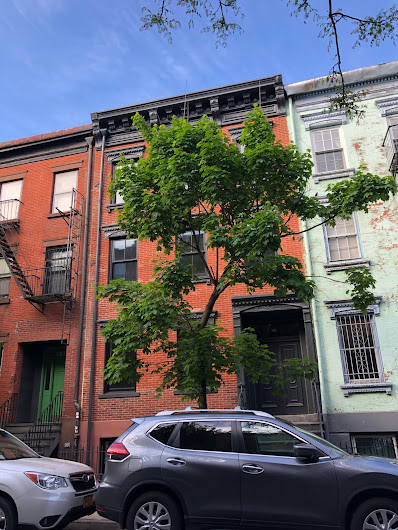 Here's a look at the recently renovated 264 E. Seventh St. between Avenue C and Avenue D. 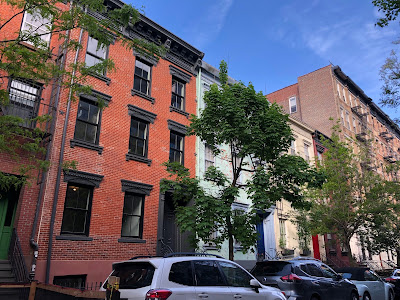 According to the approved permit filed with the city, the owners had No. 264 gut-renovated and converted to a two-family dwelling (from three units),  leaving the building's exterior in place and adding an extension in the rear.
You can see the exterior results of this work in the top two photos... as it still fits in this row of like-minded residences.
Things didn't look so good here in September 2016, when a permit was filed with the DOB to demolish the three-level, circa 1842 townhouse.

Preservations rallied to try to have the string of pastel-colored residences considered for landmarking. However, in late October 2017, the Landmarks Preservation Commission refused to consider them for such a designation.

In April 2019, word came via the Village Preservation that new owners purchased the property and nixed a full demolition. (Public records show an LLC paid $7.7 million for the address.)

And as noted before, Felicia Bond lived in the garden duplex at No. 264 when she illustrated the renowned children's book "If You Give a Mouse a Cookie" in the mid-1980s.
Meanwhile,  two residences to the east, the three-level 268 E. Seventh St., didn't fare as well ... demolition continues here... and the insides have been gutted... 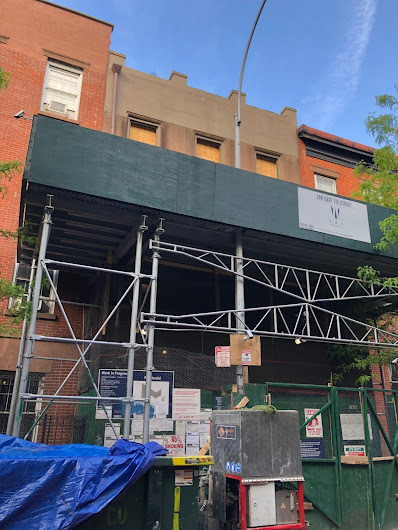 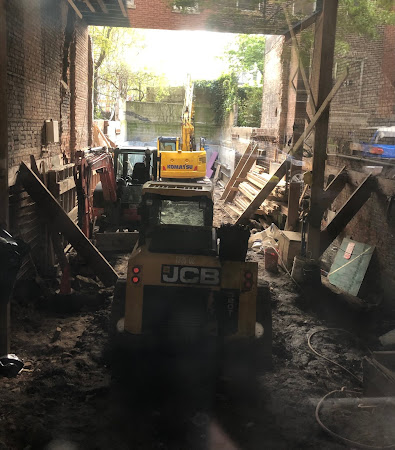 Plans, as well as owners, have changed here in the past two years. Approved permits on file with the city show that workers are adding a vertical enlargement to bring the building to six stories... which will boost the number of units to six.
Actor John Leguizamo owned No. 268 starting in 1995. In February 2013, the building hit the market with a $4 million ask. However, as Curbed noted at the time:

Leguizamo watchers on the block say that the actor moved away about 2001 or 2002.

This has always been one of my favorite blocks because of that row of townhouses. I'm sorry to see the blue color go, but happy the building still stands and think the exterior looks great.

This week I did a dissertation on these exoskeletons aka scaffolding and how they are integrating into our landscape as representations of the outward vegean movement with regards to extraterrestrial life that have the ability to mommentarily morph into scaffolding. Each time a person walks beneath or through these, 7 microns of their soul is harvested - for what, I do not know.

Townhouses are literally what pre-war architecture stands for in the towns and small cities and they are the only factor as to why people want to live in these areas and make them lively. It's only the architecture that determines whether a place becomes gentrified or not either in a major urban area like NYC or a mini urban area in the countryside. A good and an opposite example of this is Bensonhurst in Brooklyn with its vinyl siding homes doting along its landscape.

MY objection is that it doesn't appear to be luxurious enough. Hopefully there will be enough space for the servants to sleep.

I Love this Blog!!! Thankfully COVID didn’t kill the sarcasm in the EV. Now we just have to get rid of the “bro’s” of 10th and their horrible rooftop parties...