Do you have what it takes to be NYC's Director of Rodent Mitigation? 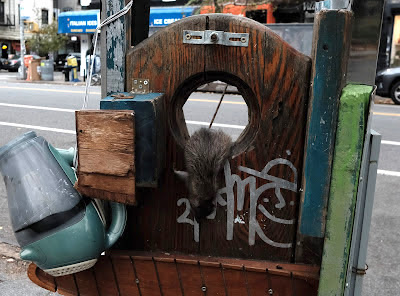 ICYMI. This was well-covered this past week (spotted first on Gothamist) ... sharing nonetheless since it involves a topic near and dear to all: RATS. 😍
NYC is hiring a director of rodent mitigation. (Listing here.)
Cutting-and-pasting from the job description:

Do you have what it takes to do the impossible? A virulent vehemence for vermin? A background in urban planning, project management, or government? And most importantly, the drive, determination and killer instinct needed to fight the real enemy – New York City’s relentless rat population? If so, your dream job awaits: New York's Citywide Director of Rodent Mitigation.
The Citywide Director of Rodent Mitigation is a high-visibility, high-impact leadership role with one of the most important tasks in city government — keeping the city's rats in check and on notice. Despite their successful public engagement strategy and cheeky social media presence, rats are not our friends — they are enemies that must be vanquished by the combined forces of our city government. Rodents spread disease, damage homes and wiring, and even attempt to control the movements of kitchen staffers in an effort to take over human jobs. Cunning, voracious, and prolific, New York City's rats are legendary for their survival skills, but they don’t run this city — we do.
Reporting to the Deputy Mayor for Operations and in the Mayor’s Office at City Hall, the Citywide Director of Rat Mitigation is a 24/7 job requiring stamina and stagecraft. The ideal candidate is highly motivated and somewhat bloodthirsty, determined to look at all solutions from various angles, including improving operational efficiency, data collection, technology innovation, trash management, and wholesale slaughter.

Salary range: $120,000 to $170,000.
Sharpen up those résumés and LinkedIn profiles!
Oh, and as Gothamist pointed out, this is not a NEW role necessarily: As deputy mayor, Joseph Lhota was designated rat czar in the Giuliani administration.
Top photo on Avenue A from December 2021 by Derek Berg. Perhaps the creator of that sculpture has ideas for this job!
Posted by Grieve at 12:00 PM

I have an undergraduate degree in Ratology and grew on Ave D with rats..No on more qualified than ME!🤣

Willard and Ben are two of my favorite movies. Do I qualify?

I know how to solve it. Get rid of the shantytown restaurant rat breeding ground strip that takes over the public roadside and sidewalks up and down Clinton Street, problem solved.

Trust Eric Adams to COMPLETELY miss the point yet again!

If NYC would get rid of the DINING SHEDS, the rat issue would abate very quickly. (Though NYC will always have some rats, many of them in highly-paid positions!)

There is no reason to pay a "Rat Mitigation" person, much less to create another layer of $$$$ bureaucracy in City Hall.

Just take the effin' sheds down permanently; THEN maybe this city can get back to being more like what it was pre-pandemic.

Omg. SAVE THE RATS!

HUMANS give rats everything they need to thrive (shelter, water, food). Take away one of those things and the rat population will go down. They will never be eradicated because they live off of us and as longs as humans thrive, so will they. Once again, it seems people are in denial about changing HUMAN BEHAVIOR in order to solve this problem. Yes, more frequent garbage pickup will help, but it's going to take a lot more change than that. Rat-proof trash cans for all residential and commercial buildings would make a huge difference. It astonishes me that this city is still just dumping plastic bags of trash on the street, then complaining about the inevitable vermin.

@10:27AM: You must not have lived here long. We *used to* have "rat-proof" trash cans - they are made of METAL and the noise that results during every garbage pickup is not something people want to go back to.

It amazes me that people cannot see this issue clearly. The bottom line is: What's changed that led to the rat population exploding in such a horrendous way? DINING SHEDS is the answer. We never had dining sheds prior to 2020. Take a clear look at the rat problem's trajectory since dining sheds came along.

Therefore, *get rid* of the fucking sheds, and we'll make enormous headway against the rat problem.

The city's approach is dead wrong, and the city's stupidity is going to result in ever more rats, b/c the city refuses to address the true underlying issue. This is deliberate stupidity, which is the hallmark of anything this mayor does.

Who's protecting the dining sheds, and why? FOLLOW THE MONEY, folks!

BTW, where is the mayor these days? Vacationing in Greece & Qatar, off the radar, apparently, b/c there's nothing that needs doing in NYC, him having solved all the city's problems. This guy is the ultimate definition of a "bum", IMO.

LOL at people acting like there wasn't a rat problem before outdoor dinning. Classic using rats as a reason to remove something that bothers you.

There are bags of trash on sidewalks in areas with no outdoor dinning that have tons of rats nearby, scurrying into the buildings.

You people live in another reality thinking the sheds are the main cause.