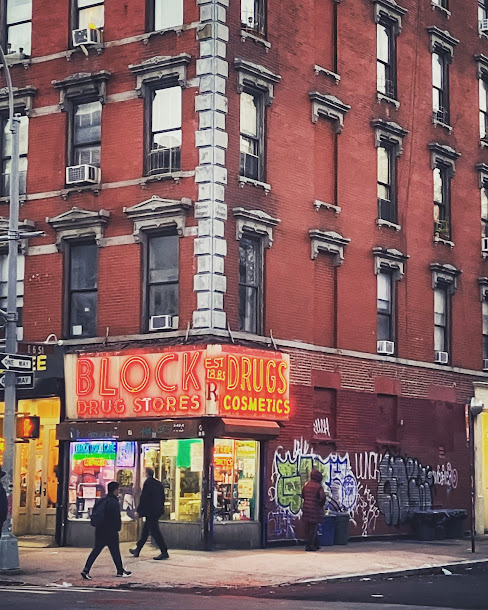 Some recent headlines from other sources include...
• Remembering Aline Kominsky-Crumb (The New Yorker ... The Associated Press ... Artforum)
• The Times talked with several men who said they were drugged at gay bars in the city, including the Boiler Room on Fourth Street; the NYPD is now investigating two recent deaths as homicides (The New York Times)
• Mayor Adams faces backlash for move to involuntarily hospitalize unhoused people (NPR) ... What forced hospitalization feels like in New York City (Gothamist)
• This pop-up gallery on 13th Street features the work of Ukrainian artists to help raise money to aid the resistance against the Russian invasion (ABC 7)
• Pinky's Space on First Street has filed paperwork with intent to sue the city after the removal of its sidewalk structure (Eater ... previously on EVG)
• The MTA says it needs new sources of income (The City)
• A recap of the community meeting in Tompkins Square Park on Nov. 17 (The Village Sun... previously on EVG)
• The Wafra Group sold The Nathaniel at 138 E. 12th St. and Third Avenue to the Westover Companies for $56.8 million, roughly 42 percent less than the $98.3 million it paid for the luxury rental building in 2015 (The Real Deal)
• Screenings in the "Four Weeks of Christmas" series include "Gremlins" and "Meet Me in St. Louis" (Village East by Angelika)
• The Klezmatics Hanukkah Show is Dec. 11 at Drom on Avenue A (Official site)
• How LES mainstay Economy Candy keeps up with consumer trends (Retail TouchPoint)
... and happening today...

This Saturday December 3, 2022 from 10AM-4PM at Gethsemane Garden Baptist Church 223 East 7 Street New York, NY 10009 we will be giving cash for guns at our Gun Buy Back. No questions asked. No current or retired law enforcement. Let’s come together as a community. pic.twitter.com/ZbE9qDOFnF

"the removal of Pinky’s Space outdoor shed allegedly caused damages of “at least $90,000,” with a profit loss estimated to be $528,000. This figure has jumped up from initial reporting by the New York Post in which Pinky’s stated outdoor shed damages were $25,000, later amending it to $50,000"

What court would buy into these nonsensical figures? 90K for a couple of mannequins and a disco ball?

So, Pinky's business model now is to get money by suing NYC? I have formed quite an opinion of them, and it's not a favorable one!

Hey, if Pinky's keeps inflating its numbers so bizarrely, it'll soon be a multi-million dollar corporation!

These Pinky's people are a JOKE. The shed was a BLESSING you had for years, it's still public space, you did not pay for It, and your restaurant fits like 3 people, what the hell.

It never made sense that Pinky’s shed was 30 ft wide. The Open Restaurants instructions showed that structures should not exceed the width of their storefront. I wonder if by suing the city they’ll end up inviting fines and auditing by calling attention to themselves.