On 4th Street, the New York Theatre Workshop opens its door to protestors 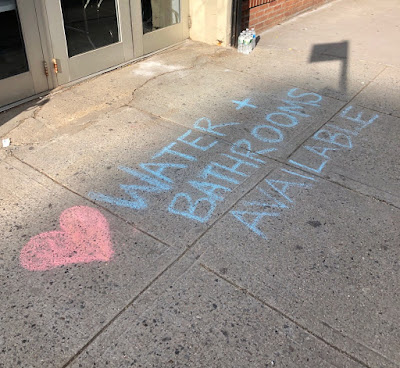 The New York Theatre Workshop on Fourth Street between Second Avenue and the Bowery recently opened its doors for protestors during non-curfew hours.

The theater, currently closed during the COVID-19 crisis, is letting protestors inside to use its restrooms and supplying them with free water and snacks as well as providing them with an opportunity to recharge their phones.

As Deadline reported, this move inspired the Open Your Lobby campaign, which is calling on shutdown theaters "to repurpose their spaces in support of protesters nationwide fighting racism and injustice."

In support of #BlackLivesMattter and the many protesters nationwide fighting racism and injustice RIGHT NOW, we challenge theaters to #OpenYourLobby. pic.twitter.com/kmEU5oZzo9

Nearly 10 other Off-Broadway theaters have joined in, including the Public Theater on Lafayette. (Find an updated spreadsheet of open venues here.)

NYC, we hear you. If you are heading out to protest today, our restrooms are open from 2pm to 6pm today, June 3. We will have staff volunteers on hand to help facilitate social distancing.

Earlier in the week, the New York Theatre Workshop shared this message of solidarity with the community... 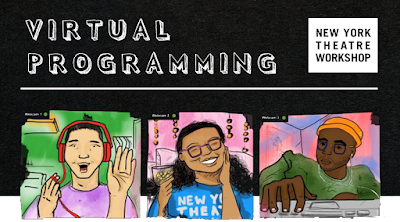 Yesterday we mentioned that La Mama was streaming select productions and events.

Visit this link to see more of their upcoming programming. Their programming is free and open to the public — you just need to register in advance. (They are also accepting donations.)

They are also launching a Virtually Neighbors program:

We recognize that this can be a lonely and isolating time for people (or just a moment where we all have some extra time on our hands) and we would like to bring our community together and make some new introductions! Since we may not be able to see our actual neighbors, we would like to create a community of new, virtual neighbors.

Are you looking for an email pal, phone call or video call once or twice a week? If so, please fill out this short Google form or email us at nytwvirtuallyneighbors@gmail.com and we will be in touch to get you started with a virtual neighbor from the NYTW community!

Posted by Grieve at 5:50 AM No comments: 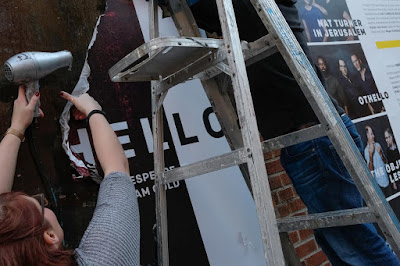 The signage came down today... as the company prepares for its next production — "The Object Lesson."

Tickets were hard to come by for this well-regarded version of "Othello." I was curious to see it. (But not this curious.) 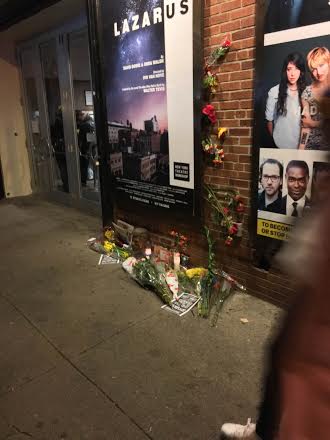 Outside the New York Theatre Workshop on East Fourth Street between Second Avenue and the Bowery... where the David Bowie-created "Lazarus" is ending its already-extended (and sold out) run on Wednesday... (though $1,000 and $2,500 seats remain for the closing-night benefit)... 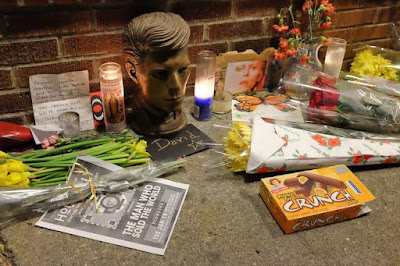 Meantime, the Post speculates whether "Lazarus" might be headed to Broadway...
Posted by Grieve at 8:47 PM 3 comments:

As we noted early last month, one-story structures in the neighborhood seem to be an endangered species. (And Jeremiah reported last month that Jam Envelope & Paper's one-level storage space is history.)

So I was curious to learn more about the now-familiar scaffolding around the single-level structure at 72. E. Fourth St. (Between Second Avenue and the Bowery.) 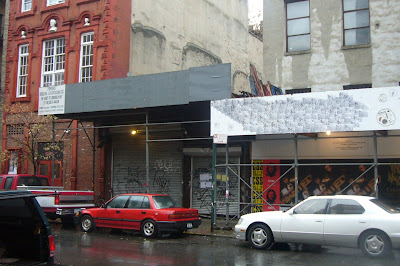 Turns out to be an interesting project. In October 2005, New York Theatre Workshop (NYTW) purchased the vacant building -- a former New York City storage facility -- “as is,” from New York City’s Department of Housing Preservation and Development for $1.

According to the NYTW Web site, the site will be "a new scenery, costume and prop workshop. Construction is scheduled to begin in the winter 2008 and be completed in 2009. The facility will be designed and built using sustainable design principles and widely accepted LEED (Leadership in Environmental and Energy Design) standards, optimizing comfort and health benefits to its employees. Manufactured materials with recycled content will be used, and wood produced from sustainably harvested forests will be used exclusively." 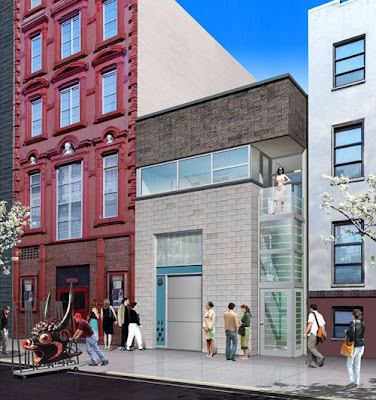