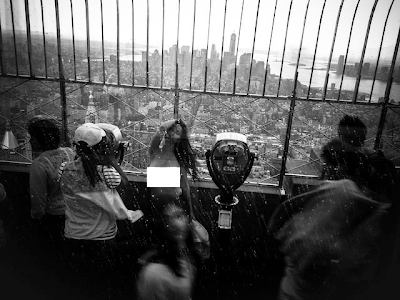 [NSFW] About the topless diner at Verso Sunday night
Posted by Grieve at 5:20 AM 21 comments: 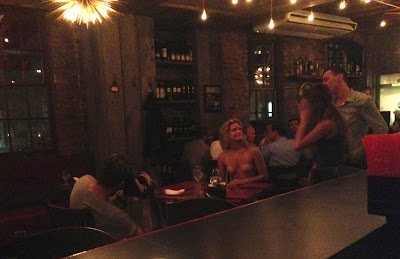 Here's a little background about how a photo taken at an East Village restaurant apparently became "the topless shot heard 'round the world."

On Monday morning, Verso owner Labinot Baraliu told us about a woman who removed her top after walking into the Italian bistro on Avenue C and East Eighth Street the previous evening.

The folks at Verso asked the woman to put her shirt back on ... and after a brief protest, she and her dining companion, who was photographing the entire episode, left. For his part, Baraliu thought it was a funny little story that locals might like.

On Wednesday morning, we heard from a responsible party — East Village-based photographer Allen Henson. He recently moved here from Los Angeles. He had been out with model Cheyenne Lutek. He offered this background. "It was an impromptu photoshoot. We did two that night," he said. "The first establishment loved it and interacted, the other, well — we weren't there long."

Meanwhile on Wednesday, news of the topless diner had made it into the Daily News, MSN and The UK Daily Mail. The item was also seemingly syndicated to various FM radio station websites across the country... such as 94.5 "the Buzz — Houston's New Rock Alternative" and Dave and Chuck the Freak at 101 WRIF in Detroit. (Please keep in mind that we weren't sending this around to anyone to feature.)

Then a story on what happened appeared in The Corriere della Sera, an Italian daily newspaper published in Milan. Someone told us that it was the paper's most-viewed article for the day. 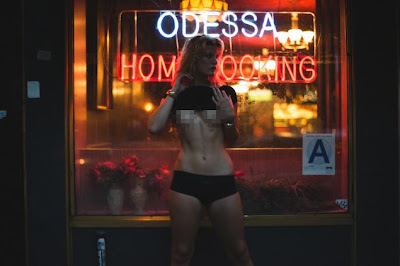 [Allen Henson via the Daily News]

Then the UK Daily Mail picked up the story again with this breathless headline: 'I'm not ashamed of my body': Model who was kicked out of New York restaurant for exposing her breasts speaks out

There was, apparently, even more coverage. Per the Daily Mail:

It's the topless shot heard 'round the world. A picture of a comely blonde who took off her shirt at a trendy New York restaurant has become an internet sensation - picked up by publications from Italy to Russia to China.

Closer to home, the Daily News really liked this story, as it was the basis for a political cartoon on Friday. 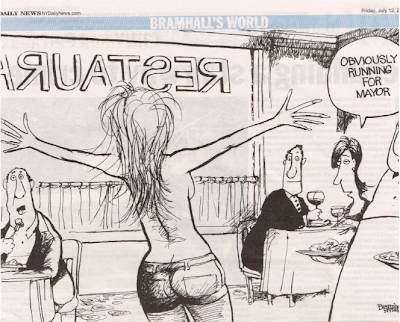 By last night, Lutek was posing with the NYPD on Avenue C. 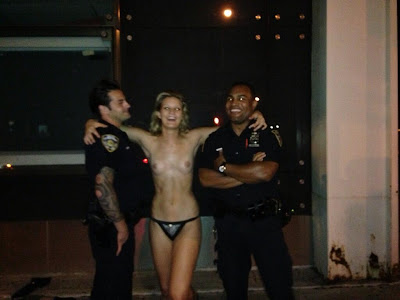 In the end, that post from Monday became the second most-viewed in EVG history, far behind another post about a topless woman. All this maybe provides some insights about how the media works. Or maybe what's wrong with the media. (Or humanity?) And it's probably too late to put up a paywall ...

Email ThisBlogThis!Share to TwitterShare to FacebookShare to Pinterest
Labels: boobs, excuse for a gratuitous photo, topless

Shocking revelations: People like looking at photos of topless women on the Internet

Last Friday, we posted the item about the topless advocate who was walking around the neighborhood topless. (This post.)

Since then, we've received quite a few more photos (which we never posted) of the women, first identified by Racked as Moira Johnston.

Which begs the question: Will you start posting more photos of topless women?

Yes. And we will also include some peen for equal time.

Actually, that wasn't the question.

This is: What was the least-viewed EV Grieve post of all time?

Oh! So many to choose from. 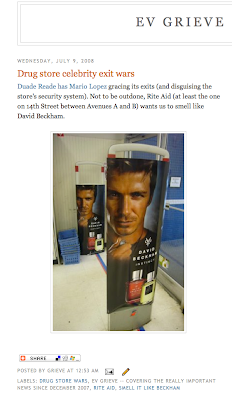 Drug store celebrity exit wars
Duade Reade has Mario Lopez gracing its exits (and disguising the store's security system). Not to be outdone, Rite Aid (at least the one on 14th Street between Avenues A and B) wants us to smell like David Beckham.

According to Google Analytics, no one even casually glimpsed at this post.
Posted by Grieve at 6:45 AM 7 comments:

Email ThisBlogThis!Share to TwitterShare to FacebookShare to Pinterest
Labels: boobs, EV Grieve is leaving notes from EV Grieve, Smell it like Beckham, topless 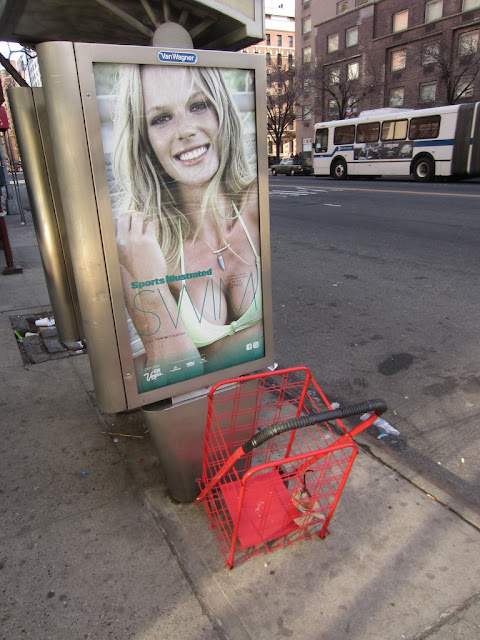 Third Avenue near 11th Street this morning.
Posted by Grieve at 10:24 AM 3 comments:

A reader walked by Cooper Union last night on the Seventh Street side and and did a double-take, so to speak... "I just had to go back and see this 20-footer hanging in the atrium." 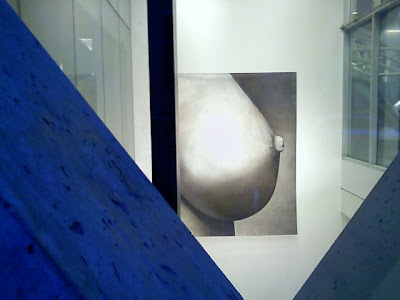 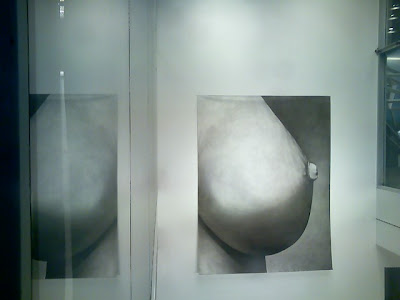 Thank goodness this isn't hanging in the window on Avenue A and Third Street ...
Posted by Grieve at 6:38 AM 8 comments: 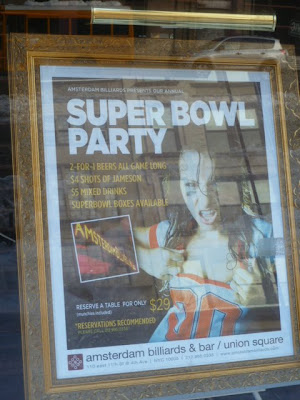 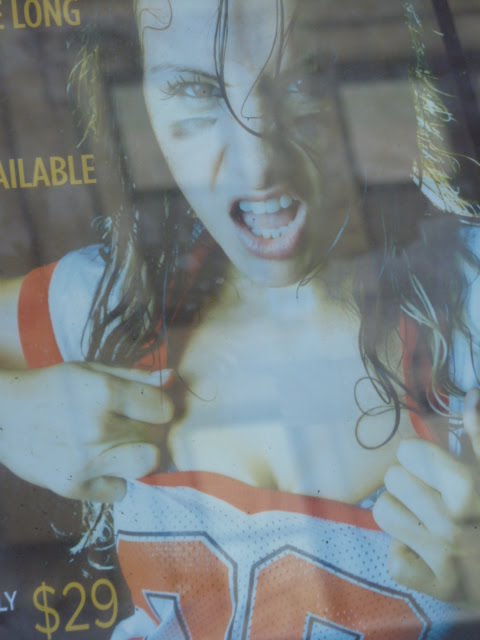 At Amsterdam Billiards over on Fourth Avenue and 11th Street.
Posted by Grieve at 6:34 AM No comments: 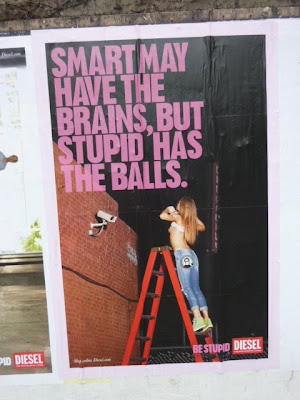 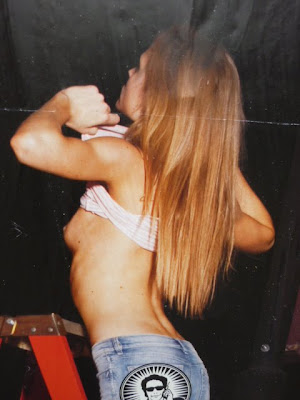 Spotted on the Bowery at Fourth Street.

Related:
Don't be stupid (Jeremiah's Vanishing NY)
Posted by Grieve at 6:44 AM 3 comments: 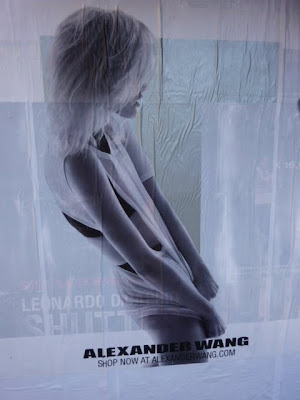 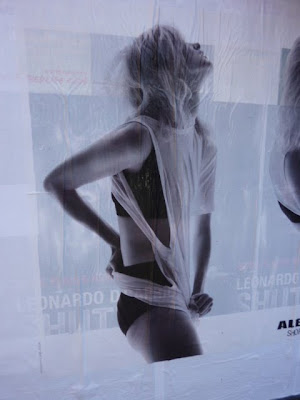 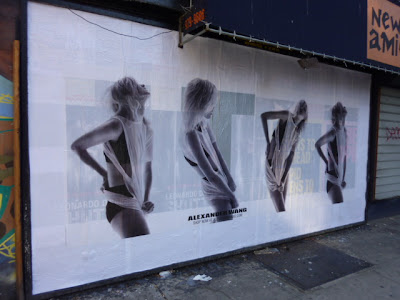 On 12th Street at Third Avenue.

Oh! It's his T line. Per BlackBook:

[H]e's making quite a statement with his first-ever ad campaign for his lower-priced line T. "The energy was much more appropriate for something like guerrilla marketing than anything too proper or formal," Wang says of the ads which will only grace NYC sidewalks, not the pages of the magazines currently stocked at your local newsstand.

Craigslist ad of the day

When: This Friday, 11/20
Where: East Village
What: Private event with club-like atmosphere
Seeking: Experienced club dancers, must be thin and pretty, very outgoing, comfortable with very skimpy outfits
Costumes and Makeup: Will be provided

Must respond with: Measurements, phone number, link to photos (Myspace, Facebook)
Include either a resume or a quick list of dancing experience

And I got no bra or shirt 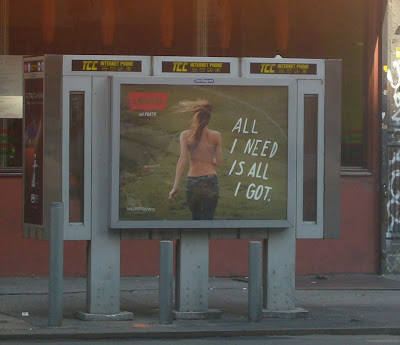 BoweryBoogie noted the new Calvin Klein Abvertisement (or maybe boobvertisement?) the other day at Lafayette and Houston... 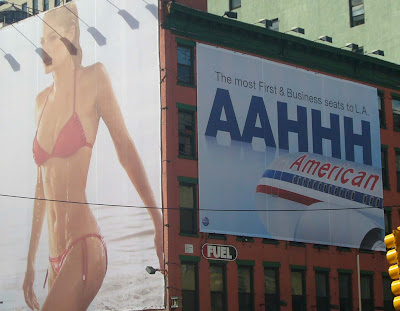 Anyway, I'm enjoying the side-by-side placement of the ads...
Posted by Grieve at 6:45 AM No comments: 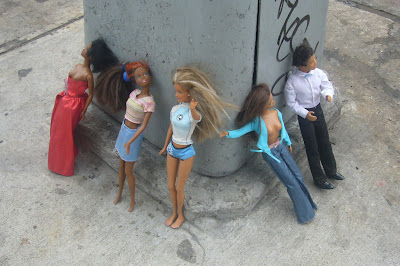 Spotted on the corner of Second Street.
Posted by Grieve at 6:32 AM 3 comments:

Big hair and boobs on Avenue B (Trends! Ken and Barbie!) 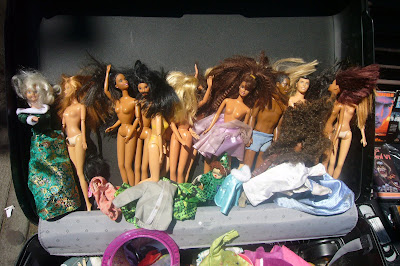 These were up for grabs at a sidewalk sale on Avenue B and Second Street Saturday afternoon. Later that night, I saw Throw Up Barbie outside a limo down the street. Her friend, Hold My Bangs While I Barf Barbie, was there for the assist. Their boyfriends, Broseph Ken and I Really Like Emo Ken, were flirting with the waitress inside.
Posted by Grieve at 6:30 AM 2 comments:

In case you missed the 5,000 (or so) "Rock of Love Girls" posters someone plastered all over Avenue A 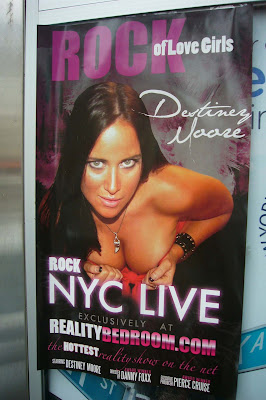 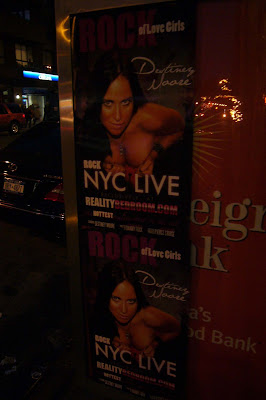 Looking forward to the graffiti on these.
Posted by Grieve at 1:17 PM 1 comment:

THE world of ecdysiasts -- a coinage of H.L. Mencken from the Greek "to peel" -- is changing fast with the closings of Scores West last February and Scores East this month. Now, Las Vegas strip club Sapphire has opened its first New York outpost on West 23rd Street. The busty beauties there, with hearts of gold, have been collecting Barbie dolls to send to poor girls in Brazil. Word is Sapphire will also soon be taking over the much larger Scores East space on East 60th in an attempt to lure back the high-end horn-dogs who now patronize Rick's Cabaret on West 33rd.

Posted by Grieve at 9:36 AM No comments: