Reader mailbag: What do I do about my new neighbors who smoke pot all the time? 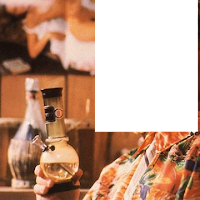 After last week's reader question about finding places in the neighborhood that still have an older East Village vibe... and after assuring me that he was not pulling one over on the Griever ...

The scenario from a reader: The neighbors are new as of the beginning of September. They are recent college grads who seem fairly well off and pretty insular. (Meaning they're not the let's-meet-the-new-neighbor types.) They have some unknown office jobs. They both arrive home around the same time each night (7ish). And then just about every waking moment in the evenings, mornings and weekends, they're smoking pot. And it's likely not for medical reasons.

While the reader isn't opposed to you know, partying, he doesn't want to have to smell the weed all the time. It has become annoying.

I did a little research and found this piece from the Daily News from May 2012 on the topic.

"New York courts have recently found that secondhand smoke constitutes a breach of the warranty of habitability, which is a non-waivable obligation imposed on all residential landlords [including co-ops] to insure that the premises are fit for human habitation and do not contain any conditions that would be dangerous, hazardous, or detrimental to tenants' life, health or safety," says Ian Brandt, a real estate lawyer at Braverman & Associates in Manhattan. "The threat of habitability violations might be sufficient economic incentive for a landlord to begin eviction proceedings."

The reader wanted to know if anyone has managed a similar experience (preferably successfully). Any advice? Anyone...?

We often get reader queries ... asking for help with, say, donating clothes or books ... or finding an East Village-based caterer... If you have a question for the masses, then try the EV Grieve email...
Posted by Grieve at 6:20 AM 80 comments:

As the Washington Square News reports, "The cost to live in many NYU dorms will increase next year — and at the same time, rental prices around the city are dropping rapidly."

The article goes on to discuss the Real Estate Group’s Manhattan Rental Market Report. And what does all this mean...? Simple. Let's go back to the article.

Because of lowered prices, more students have begun to use the Off-Campus Housing Office’s housing registry to look for apartments or a roommate.

“Many students are doing more comparative shopping and are evaluating the benefits of off-campus housing versus on-campus housing,” said Jennifer Brown, assistant vice president of Housing and Strategic Planning. “Most notable in the outside market is the increase in availability of the smaller types of accommodations such as studios and one-bedroom apartments.”

Despite fees such as security deposits and utilities, many students still find it beneficial to move off campus.

“I’m going abroad, but when I get back, I’m moving off-campus, hopefully the East Village, because you can find comparable prices to NYU,” CAS junior Joe Haldeman said. “If you can get the same price for something you would have to share at NYU, why not?”

Email ThisBlogThis!Share to TwitterShare to FacebookShare to Pinterest
Labels: East Village, Lower East Side, NYU, the apocalypse, your new neighbors

It smells like something at 201 E. 19th St., and it sure isn't Christmas.
The Missionary Sisters of Sacred Heart are suing two tenants in the Gramercy building who they say are creating an ungodly stench that's making their neighbors sick.
Gloria and Michael Lim have "caused noxious, foul and harmful odors to emanate from the [apartment] into the common areas of the subject building as well into other apartments," the nuns' suit says.
"The smells emanating from the subject premises are so horrible and potentially dangerous to the life, health and safety of the tenants" that "on one occasion the Fire Department . . . had to be called."
The odor on that occasion from the apartment was so awful that building workers had become "seriously concerned that the smell was the result of someone having died in their apartment and began ringing certain tenants who live alone to check in on them," the filing says.
When all those people were determined to be still kicking, the concerned firefighters zeroed in on the Lims' apartment, convinced the dead-person smell was coming from there.
They pounded on the door and when they got no answer, they started to break it down, the suit says. Gloria Lim eventually came to the door and asked what the "commotion" was, the suit says.
The firefighters entered the apartment, and Lim told them she was "smoking and drying fish."
When asked by The Post what caused the odors -- which court papers likened to "vomit or rotting meat" -- she only said: "I cook dried fish."

Ugh. The worst thing my neighbor does is play the one disco-y CD he owns over and over....
Posted by Grieve at 9:04 AM No comments:

Email ThisBlogThis!Share to TwitterShare to FacebookShare to Pinterest
Labels: dead things, shooting fish in a barrel, your new neighbors 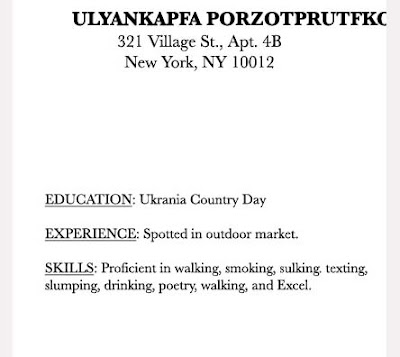 Goldenfiddle has this. Footage of aspiring gazelles from DNA Models, located at 520 Broadway.
Posted by Grieve at 8:30 PM No comments: