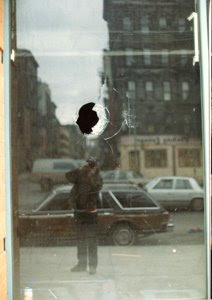 Clayton Patterson is the artist and documentarian who has been chronicling the changes in the Lower East Side since he first set up shop here in the early 1980s. Some of his 100,000 photos and 10,000 hours worth of footage went into Captured, which plays tonight at Webster Hall.

Also, Patterson, who grew up in Canada, was featured in yesterday's Toronto Globe and Mail.

Patterson never had much trouble gaining access to the sort of people who might normally be suspicious of a camera in their midst - drug dealers and users, gang members, others on the margins of society - in part because he shoots without judgment. But Captured shows that newcomers to the neighbourhood -- like developers putting up $3-million condos on the Bowery -- are suspicious of his camera.

Previously on EV Grieve:
“When I go out my door now, I don’t see anyone I know. I see the loss of a community.”
Posted by Grieve at 8:59 AM

I don't get it. He laments not "knowing" anyone he sees on the block but at the same time likely rails against so-called "yunnies" just because they answer a cell phone call in public. I'm so tired of guys from Wisconsin thinking they own the joint just cause they's lived here for 10 years, at the same time, catering to bums and vagrants out of some inane thought that they add "character" to the area moreso than so-called "yunnies". Go up to the blighted areas of the Bronx, I bet they'd love to have you. Better yet, they'd trade their bums and drug dealers for you. even trade.

This movie was great!I was thrilled that it focused more on the neighborhood and wasn't another film about Blondie and how terminally cool 1981 was.

And Tribeca Film fest rejected this -- I guess they only want to show films that won't offend the yunnies. I'm losing my faith in you, De Niro.