Citysearch busts out a new look. (It's still in beta...) As Cnet reports, "there's a more streamlined and Ajax-y interface, but a few important features have been tweaked as well." Citysearch has expanded to 75,000 towns and neighborhoods, "meaning that you can narrow down your focus to New York's East Village or Los Angeles' Culver City."

Indeed, you can now narrow down your focus to either the East Village OR Alphabet City! Subtle! 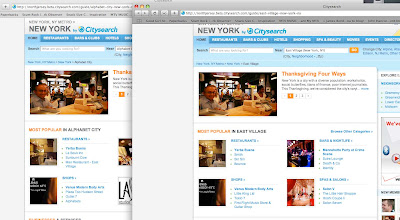