What's doing on at the northern end of Avenue B?

Been keeping my eye on the new development at 215 Avenue B at 13th Street that was once home to The Sylvia del Villard Program of the Roberto Clemente Center. The outpatient clinic was taken down in less than a week in September 2007. As Curbed reported in May, this site will be home to really-out-of-place-looking digs designed by the Stephen B. Jacobs Group, who did the Gansevoort Hotel, among many other things. (Oddly enough, I don't see this project listed anymore on the Jacobs Group Web site.) Whatever is going in here, it seems to be happening quickly. It appears as if another level is completed every time I walk by. Which is fairly often. The two shots were taken just a few weeks apart. 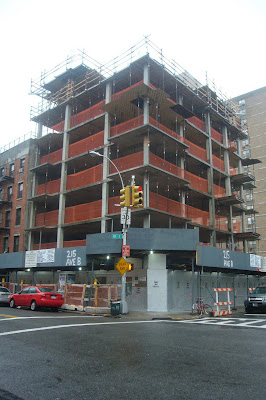 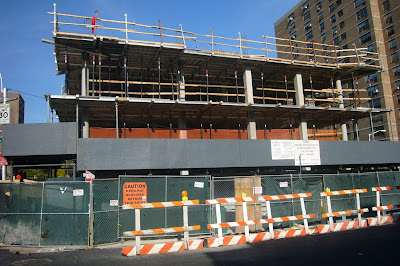 And workers have even been there in the early evening hours. 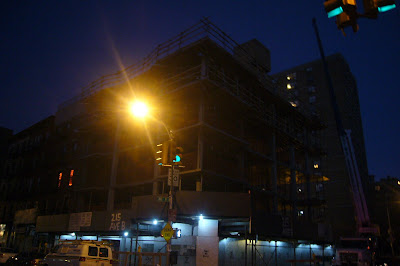 Meanwhile, I can't help but notice how many empty storefronts line Avenue B from 12th Street to 14th Street. I counted six. Or maybe seven. And I'm just thinking of some of the bigger names that have come and gone, like Sonic Groove at 206 Avenue B (Sonic Groove is online only now) and Luca Lounge at 220 Avenue B. And that lingerie shop that sold bras next to the coffee shop B Cup. (Heh.) 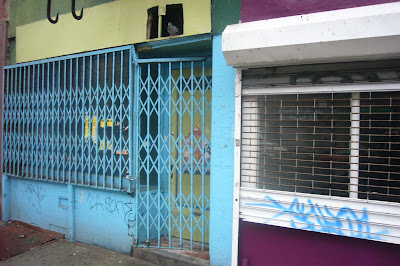 Don't forget about the "massage" place that was next door to the lingerie shop, that got busted for prostitution.

That's right...What was that place called, something subtle like "The Bodyworks Station"...?

Something like that. It was pretty short lived. I used to see the girls standing outside smoking between clients. A friend thought it might be one of those places, and was going to check it out, but they got busted before he got to. It almost feels like the old Alphabet City is trying to sneak back in!

Yeah, I don't understand the economics of these places...How do they (legally) make any money? And a new one seems to come along fairly often. I've never seen anyone enter or leave the "spa" on St. Mark's between A and First Ave.