Seems as if the on-again, off-again construction at 103 E. Third Ave. at 13th Street has been going on forever. I forgot now what's even going on up there. There was talk of a hotel some years back. 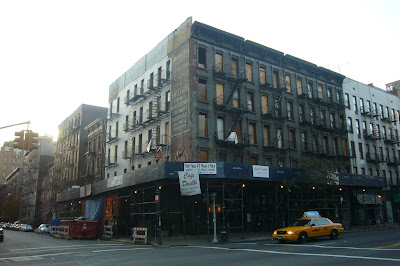 In any event, the new paint job on the 13th Street side is getting awfully close to the faded ad of one of the site's former occupants, Hudson's Army-Navy Store. 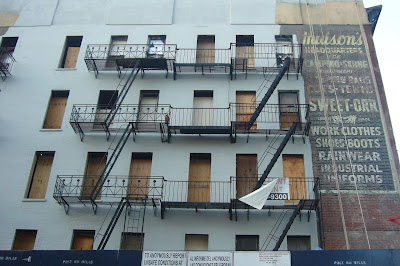 What are the chances the developer has an appreciation of history, and will let the old Hudson's ad stay as it has been for years...? 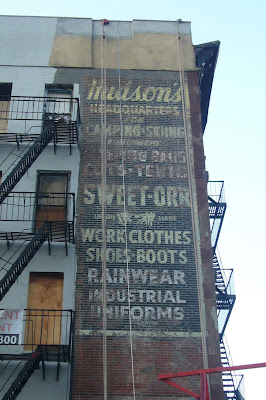 You can just make out a smidgen of a Hudson's street sign on the bottom left in this undated photo of the Third Avenue El by David Pirmann from nycsubway.org. (Pirmann took the shot looking south from the 14th Street station.) 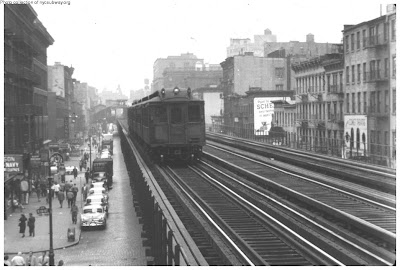 The nycsubway site includes an article on the launch of the Third Avenue El from Aug. 27, 1878. A reporter asked business owners along Third Avenue about the new noise casued by the elevated train. This included the proprietors of 103 E. Third Ave.:

At Lamke Brothers', grocers, No. 103 Third avenue: "Naw, we are used to noises on this avenue."

Meanwhile, take a ride on the Third Avenue El via YouTube. You may have seen this before, but...:

you know, I thought I was crazy but I swore there was a army navy store somewhere around there when I used to come here in the early eighties. could it have been the same one? any idea when it closed?

In the very last clip what movie theater is that?

actually, I remember getting propositioned for the first time in that area back in 1982. used to be quite a "colorful" strip back then.

Thanks for the comment, Mykola...I'm not sure what theater that was...I like the sound of your book.

That video was great, thanks for posting it.