And The Times has a preview of sorts today.

The Clash looked down from a wall-size 1978 photograph at a roomful of workmen sawing, measuring, painting and lugging. Vintage amplifiers were wheeled in from the chill outside, passing by plexiglass exhibition cases, Bruce Springsteen’s tarp-covered 1957 Chevrolet and a 26-foot scale model of Manhattan. Then came the heads-up.

“Here comes the phone booth,” somebody said, and in rolled the wooden phone box from CBGB, plastered with decades-old stickers like a punk sarcophagus. Workers stood it up beside graffitied wall sections from that landmark club, along with two of its loudspeakers and a metal frame for the “CBGB & OMFUG” awning that hung over 315 Bowery until the place closed two years ago.

These were among the hundreds of artifacts being prepared for the opening on Tuesday of the Rock and Roll Hall of Fame Annex NYC, a $9 million branch of the Hall of Fame and Museum in Cleveland. The Annex, in a 25,000-square-foot basement space at 76 Mercer Street in SoHo — upstairs, facing Broadway, is an Old Navy store — was created as a smaller, quicker offshoot of the headquarters.

A trip through should take about 90 minutes, and costs $26; in Cleveland, where admission is $22, the full experience takes four or five hours. As in Cleveland, you can hardly turn a corner in the Annex without bumping into a smashed guitar, yellowed lyric sheet or pointy bustier.

Well, that's all I need to see! And $26!? Fuck me! I'm going to go twice! I shouldn't be so sarcastic. I'm sure it will be a rockin' good time. Anyway, I'm already standing in line for the opening. I'm with Alex and Hunter-Gatherer. Just keep them away from the Billy Joel! OK, OK...lies. Anyway, some photos from the Rock and Roll Hall of Fame Annex press conference from last August courtesy of the CBGB Web site: 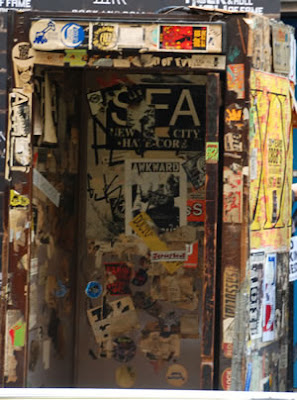 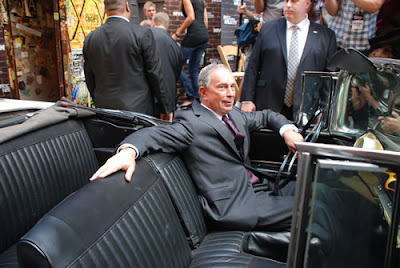 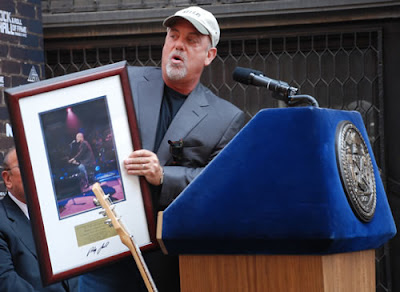 Question: Bloomy looks so natural behind the wheel of Springsteen's '57 Cadillac. Think he has ever even driven a car?

Bonus!
The best rock and roll photo that I've seen of late? Hunter-Gatherer has it today.
Posted by Grieve at 7:30 AM

Email ThisBlogThis!Share to TwitterShare to FacebookShare to Pinterest
Labels: Rock and Roll Hall of Fame, SoHo

uh, scuze me, scuze me sir. Can I get in there? I need to urinate on the Caddy's wheel hub. The splash should smack Bloomy...right..about ...there!

it's always nice to get a watered-down version of something from cleveland.

Billy Joel juxtaposed with the words Rock and Roll is just stupid.