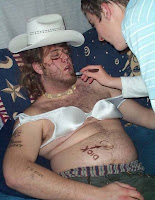 Where oh where to begin. From the Times today:

Here’s one mistake that stressed out financial workers may want to avoid right now: Don’t get so drunk over the bear market that you dial up your broker and buy a luxury Manhattan condo on a boozy whim.

But Kipton Davis, a Prudential Douglas Elliman broker from Virginia, thinks a little bourbon could be good for sales.

Just as a few drinks may coax timid traders onto a dance floor, it could help them muster the courage to buy multimillion-dollar apartments.

That’s why on Wednesday night, Ms. Davis lured a half-dozen bankers, traders and friends on a condo tour of four TriBeCa buildings by offering wine and whiskey at every stop.

“Alcohol brings everyone together,” said Ms. Davis, after showing the group a $9.9 million penthouse at 16 Warren Street with an eight-seat hot tub. As the crowd debated whether they valued the hot tub over the layout of the $2.25 million unit downstairs, they sipped Chardonnay and a Chinon.

But they did not deliberate for long. There was tippling to be done. The pack headed to a $3.3 million bachelor loft at 132 Duane Street, where they were greeted by another Elliman broker, Francine Hunter McGivern, and a small spread.

“Have some food. Don’t be shy,” Ms. McGivern said.

They helped themselves to chicken satay and samosas and washed the snacks down with Sancerre wine, and Lagavulin ($77 a bottle) and Talisker ($60 a bottle) whiskeys. They sipped and listened while Ms. McGivern stressed that her client, a banker, did not need to sell. He will hold out for a buyer willing to pay for his meticulous renovation featuring Miele fixtures and wood floors imported from Austria. The crowd seemed pleased.

“The thing I dig is the bar across from the powder room,” said Patrick Nichols. Twenty-seven and newly married, Mr. Nichols, a trader with Jane Street Capital, scribbled in a leather-bound notebook and snapped photos. He is looking to spend $2 million to $3 million on a two- or three-bedroom apartment. He said he did not know many people hurt by the slowdown, and he was not worried about losing his job.

Email ThisBlogThis!Share to TwitterShare to FacebookShare to Pinterest
Labels: drinking, expensive condos, the worst people in the world, things that you can't make up

I thins Sheila at Gawker had been stealing your thunder, man. This is about the 2nd time (as far as I 've noticed--could be more) she had posted the same story you earlier had posted. Gawker fired the wrong girl. It shouldn't have been Moe.

Ms. McGivern stressed that her client, a banker, did not need to sell. He will hold out for a buyer willing to pay for his meticulous renovation featuring Miele fixtures and wood floors imported from Austria.

Sometimes it's hard to resist the notion that the most auspicious development New York City could ever mount would be to decorate Central Park with these people's heads on poles.