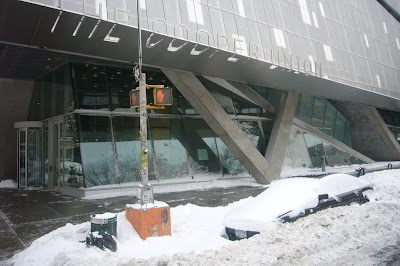 At Time magazine, Richard Lacayo weighs in on the the still-pretty-new Cooper Union academic building...and here we go:

The East Village is a New York City neighborhood with a complicated vibe. It's a place where restaurant equipment wholesalers and ancient brick walk-ups rub shoulders with spanking new condo towers and hip hotels with signature martinis. Almost everywhere there are also traces of the hippie-Boho culture that settled in before the 1960s and does what it can to keep its flag flying.

It's difficult to insert a new building into those streets and get it to speak to so many different contexts. The ideal combination of grit and elegance, muscle and intellect is hard to arrive at, and over the last four or five years some local projects by name architects have gotten it wrong. But Cooper Union's new academic building, which opened this fall, is a genuine triumph, a canny exercise in architectural multilingualism.

it's quite possibly the ugliest building in new york.

This is a great Guide to Fitness and muscle building