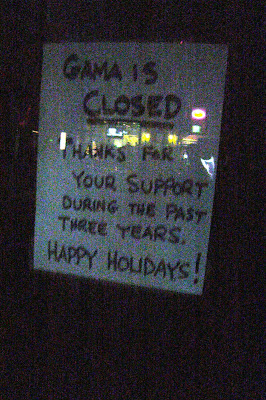 It just seems as if this location has been many things in recent years...Prior to this, it was San Marcos, the Mexican eatery that served huge margaritas, Siren, a really lame club once visited by Sarah, the Duchess of York in some kind of Page Six baiting, and @Cafe, an Internet bar. (And before it became a restaurant that closed every few years, wasn't this the home of St. Mark's Books?)

However, take a look at this rest of the building...above the Yoga to the People sign... 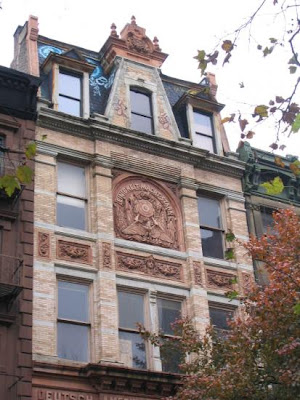 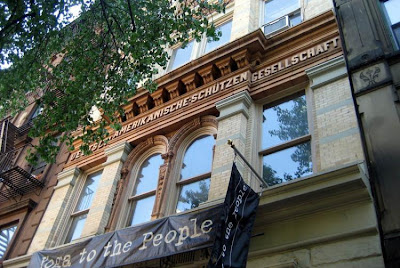 The building was originally home to the The German-American Shooting Society. Per Revel in New York:

The German-American Shooting Society Clubhouse (Deutsch-Amerikanische Schuetzen Gesselschaft), at 12 St. Mark's Place, dates back to 1889-89. Prior to the 20th century, St. Mark's Place was the heart of Kleindeutschland, or Little Germany.

This yellow brick clubhouse, designed by William C. Frohne, served as headquarters for 24 companies who offered offsite facilities for target practice to the immigrant community.

A rare example of the German Renaissance style in New York, it features fanciful ornament, a steep mansard roof and tall ornate dormers. Particularly noteworthy is the arched panel at the center of the fourth story, depicting a target and crossed rifles above an eagle with outstretched wings.

The German-American Shooting Society Clubhouse was designated a landmark by the New York City Landmarks Preservation Commission in 2001.

For a lot more information on this and other historic parts of the East Village:
The Greenwich Village Society for Historic Preservation

The Lower East Side History Project

Bottom two photos via.
Posted by Grieve at 6:40 AM

Once again proving I just don't look up enough. Thanks for the post and link.

Thanks for this, I too never noticed the architecture.

This was the second location of St Mark's Bookshop. They left in 1994 to move to 3rd Avenue. I'm not sure how long they were at 12 St Mark's, but their first location was on the North side of St Mark's Place.

In the movie, Blank City, this building comes up briefly as a short-lived, makeshift movie theater where the No Wave Cinema films were shown.