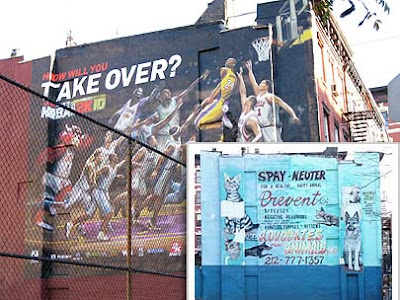 Back in the fall, we devoted several posts to Chico's "spay/neuter" mural on Avenue A near 12th Street that was painted over for a Kobe Bryant video game ad.

Interestingly enough, Media magazine reported on the story. (Thanks to the reporter, Christine Champagne, who reached out to me for the article.) Here are portions of the piece (you can find the whole thing right here):

For nine years, cats and dogs loomed large over a parking lot on Avenue A as part of an iconic Advocates for Animals mural on the side of a tenement building in Manhattan's East Village. Created by well-known local muralist Chico, the mural tugged at the heartstrings with an assortment of animals — including a sweet kitty with pleading eyes and a trusty German Shepherd — urging local residents to spay and neuter their pets, and providing a number to call for assistance.

But the mural, which can be seen in the opening moments of the 2005 film "Winter Passing," was whitewashed this fall and replaced with an ad for 2K Sports' NBA 2K10 basketball video game, and now NBA superstar Kobe Bryant looms large on the wall.

For her part, Irene Muschel, a social worker and animal activist who runs Advocates for Animals, and hired Chico to paint the mural back in April 2000, didn't even know it had been covered up until MEDIA contacted her.

Muschel claimed that the landlord of 189 Avenue A, Desides Weinberg, was contractually obligated — "We had a legal contract drawn up by an attorney and signed by me, Chico and the landlord" — to keep the Animals for Advocates mural up for 10 years. If that's the case, the mural should have stayed in place until April 2010. "About a year ago, the landlord that signed the contract called me about how he needed income, and he said there was an advertiser who wanted to put something up there, and would I go along with it," Muschel recalls. "I said no, actually, and I had contacted a lawyer. But then it just faded away."

For his part, Weinberg repeatedly insisted that the contract Muschel speaks of was a "phony contract." He also faulted Muschel for not properly maintaining the mural, pointing out that chunks of it had fallen off the side of the building over the years.

One has to wonder: Did New York-based KD&E Advertising, which did the media buy for the NBA 2K10 campaign, realize the ad would replace a mural that had special meaning to East Village residents? KD&E did not return calls or respond to efforts made to reach someone at the agency on MEDIA's behalf by a representative for 72andsunny, the creative agency on the campaign.

Muschel says she is not going to pursue the matter legally or otherwise, instead choosing to focus on the good the mural did. "The mural helped a great many animals get spayed and neutered and provided answers on a wide variety of animal issues to people who called," she muses. "It did its work."

Previously on EV Grieve:
NBA ad takes over
Posted by Grieve at 7:00 AM

get chico back in there to paint another one.

let's get this campaign started....

And I find it interesting that the landlord blames her for not properly maintaining the mural, that chunks of it had fallen off the side of the building over the years.

It's HIS building... chunks of the BUILDING are falling off...

Wow, I had no idea there was a back story. I still miss seeing those animals...that mural really cheered up a bland block.

And that NBA ad is horrible... showcasing Kobe Bryant, the most selfish, cocky NBA player around...and why are there are like 20 players and a mascot on the court...?

I miss the animals too.

Lame. Did you cover the David's Bagels fiasco, too? I recall hearing perhaps a year ago that the owner of the Hot & Crusty franchise on 14th and 1st only agreed to move in IF the landlord -- who also owns the David's space -- pushed out David's. As if anyone goes to Hot & Crusty for the damn bagels.

hrm. maybe he just means CHUNKS of PAINT are missing.

and am i wrong to believe that this mural is on the building that looks fairly small and seems to house a number of elderly residents (who often sit outside on lawn chairs during the day). is it possible that the landlord is a bit older him/herself, cannot afford the upkeep of the building and does actually need the money for building/living costs? just a possibility and an alternative to "omg, this landlord is a total money grubbing douchebag because he wanted to advertise on the side of his building".

Jill at Blah Blog Blah had coverage on David's closing:

Jeremiah Moss covered it too:

I live on 11th Street and I was also sorry to see the mural get painted over, though it didn't surprise me that someone was so quick to sell out the neighborhood to more advertising. Had the neighbors been able to weigh in on keeping Chico's mural up, I think it would still be there now. And for the record, the cats and dogs mural seemed to be in good condition...

ak, I agree the landlord has the right to make money, but he should have honored the original contract then cashed in.

I have a question. Remember Dave's Electric Pumps and Motors? That shop was on the first floor of that building for years, but then it disappeared and was replaced by that Vampire Freaks store. I wonder if they were forced out or wanted to leave.

It's really sad what's happening in the East Village.

I was so bummed out when they painted over the mural - and put that double dumb ass ad on. Chico is what the neighborhood is all about. Take a look at all the friggin dogs in the East Village (and the dog run that I've been using since 2001). But as Mayor Bloomberg has made abundantly clear - cash is king in NYC.

I love how the landlord accuses her of not maintaining the mural. Has anyone seen the NBA2K10 mural lately? A huge chunk of it has fallen off!