The building at the corner of 13th Street and First Avenue (219 First Avenue to be exact), has been a boarded-up mess/construction site the last four or so years... Here's a shot of the corner from 2007.... 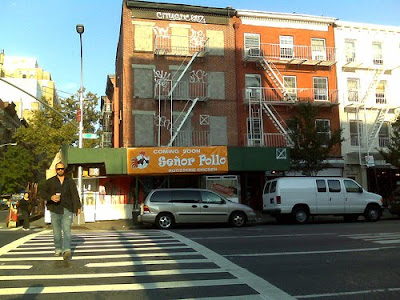 However, there has been some slow progress to report of late. According to the work permits, an additional two floors are being added on top of the existing four-story structure.

For starters, we're intrigued by the new roof... 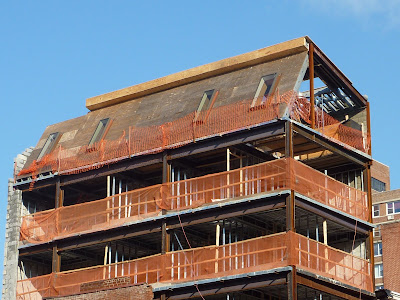 Oh, anyway, if you look carefully at the building, there seems to be something off about it...like that seventh floor (technically the attic?) 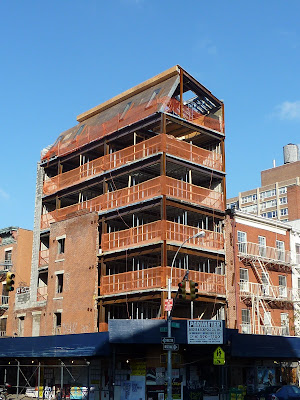 Which may be one reason people have called in nearly 60 complaints about this site since 2005. (Several callers reported seeing squatters coming and going from inside the abandoned site.) The last complaint was logged in late summer: 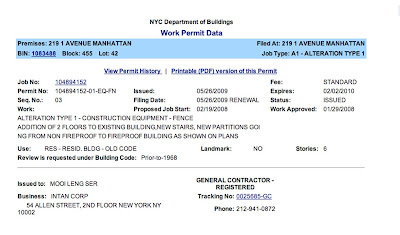 CLR STS AT ABOVE CONSTRUCTION SITE, PERMIT POSTED IS FOR 2 ADDITIONAL STORIES, BUT 3 STORIES ARE BEING BUILT. WORK IS BEING DONE OUTSIDE THE SCOPE OF THE PERMIT #104894152-01 AL

So now what, lop off that slanted roof?

UPDATED: Per a commenter, there was approval for the addition.


Meanwhile, you may recall what used to be in this space -- the Mee Noodle Shop. As NY Songlines noted, it "was Allen Ginsberg's favorite Chinese -- and mine, too, I guess. It closed in 2005 after the building started to collapse."

As the Times noted in its obituary on Ginsberg from April 1997:

Sure, she knew he was someone important, someone artistic. She could tell that from overheard conversations and from the way other diners would sometimes point at him when he entered. But to Ms. Chong, he was mainly the unfussy man with a dependable hankering for steamed flounder in ginger sauce. "When he came in," she said, "we knew what he wanted."

I lived on 13th Street between 1st and 2nd, saw Ginsberg quite a few times entering or leaving the restaurant. Passed by when a wake was held for him in St Marks Church a few blocks away and the waiters just went with their business as if nothing happened.

this building is insane, i keep waiting for it to blow over in a stiff wind.

and thanks for the reminder about Mee Noodle--i forgot about that place.

I'm curious if the developer thought that he/she could slip an extra floor in here without anyone noticing. But, given the number of complaints called in, someone is paying very close attention here.

looks like the fort i made as a kid. what do you call that, a lean-to?

I really miss the Mee Noodle Shop. Meanwhile, I can't believe how long they've been working on this building.

There is actually a permit for the extra mezzanine roof:

The lean-to reminds me of all those nights I spent out in the wilderness of the Adirondacks.

OK, I've never actually been to the Adirondacks or inside a lean-to, but...

I remember when this building was in danger of collapsing...weren't the tenants forced out without notice because it was so dangerous? If so, how can it possibly support more floors?

When i came to the city over 6 yrs ago, i moved into my first apartment at 416 East 13th. (right off the corner of 1st) I have fond memories of Mee Noodles....

That building has been "under construction" & such a sore eye on the corner for so long. Absolutely Ridiculous!

20 years ago, in the little space behind Mee, was a small soul food kitchen called Greens & Things. The BEST smothered chicken and fried fish ever! I still dream of it.