Moving away because of those sausage-party dinners at Schiller’s 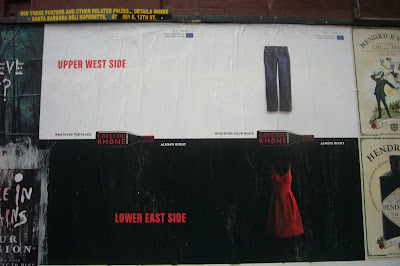 Well, you may have already seen this breakup letter in the Times this past weekend... John Vorwald, a former editor at The New York Observer, who lived at the corner of Ludlow and Rivington Streets for six years, decided enough was enough with the yunnies and he's moving on...

You gussied yourself up with shiny new hardware: Thor, Fat Baby, Spitzer’s. Hordes of banker boys in J. Press checked shirt/chino uniforms and manicured necklines swarmed to you faster than to the promise of a government bailout. They enjoyed sausage-party dinners at Schiller’s (“It’s like Pastis, but edgy!”), used winter as a verb and eyed sun-speckled Germans and Australians “on holiday.”

Email ThisBlogThis!Share to TwitterShare to FacebookShare to Pinterest
Labels: Lower East Side, The New York Times

he does say it very well.

All style, no substance. He's been there just six years -- yunnification was in full effect in 2003. Moving to new neighborhoods every several years (he mentions four previous) while really committing to none may not make a person part of the problem, but it also doesn't make me want to call you "neighbor," either. (It's also a luxury to be able to afford to pick up and leave every time you get your undies in a knot about your neighborhood's latest bar of dickheads -- I should know, Superdive is on *my* block.)

Two male models on a corner make this dude want to cut and run, but The Ludlow doesn't rate a mention? He doesn't even complain about something basic, e.g., "my Laundromat is gone." He just doesn't like the way the new kids dress themselves. Boo hoo!

Yes, he does say it well ... I originally had some comment in the post that he only lived there six years...It sucked in 2003 too. Perhaps not as much, but...

And how hilarious is it that a basically privileged white dude -- a former editor at The Observer, no less -- says goodbye to his "lovely Loisaida." Where's he's been living ... since 2003.

Self-awareness: you are lacking it, sir.

similar reasons why i moved, except that i could not articulate it as well as he does. i miss the les and ev, but not because of where it is, but more of when it was.

I'll read this with a glass of white whine.

The article got alot of negative comments on Gothamist, most of them of the "it sucked in 2003 too!" variety.

Actually I was away from New York for all of 2008, and the Lower East Side really did seem to change more than any other neighborhood after I got back. The best way I could put it is that in 2003 yunnification was under way, but it was still patchy and coexisted with the various older versions of the neighborhood. In 2009, it seems to be 80% frat bars, almost as if Murray Hill got transported down there. There is simply a difference between having a couple versions of Libation in one neighborhood and having eight.

I'm familiar with the late 1990s version of the Lower East Side, and I prefer it to the 2003 version, but I think there is a bit of revision to the claim that there was no difference between 2003 and 2009. Its like the people who insist that New York lost its edge in 1981.

Also, the LES was the last neighborhood in Manhattan where people made even a pretence of bohemianism, and I'm aware it was only a pretence. Now there is no distinction between uptown and downtown. In fact, there are no uptown neighborhoods have have been yunnified as completely as the West Village and now the LES.

It still rocks in a fashion down here.

What are you guys talking about.. Have you been to canal, or east broadway? That's the lower east side too. People keep talking like those four blocks where THOR is is the only Lower East Side. Go south of Rivington once in a while. Yeah, it looks just like the West Village down here. The yunnies have gotten so good though, they are masquerading as hordes of poor Hispanic and Chinese people!!!!

Anonymous, no good, I go south of Rivington and I see condos. And fancy restaurants.

You are right in that the city runs some large public housing projects along the water. I worked in one, and its a favored destination for immigrants. So there is part of the Lower East Side that kept to its roots. But the anti-blight is spreading.

One fact that I love about the Lower East side is that a million people lived there in 1910. At the time, there were 2.5 million people in Manhattan. Now there is 1.5 million people in Manhattan and about 90,000 in the Lower East Side. Generations of reformers worked to move people out of the overcrowded tenemants there and into the suburbs, and they succeeded. And in various ways, the people left behind in the city developed very differently than the people who moved out to the suburbs and their descendents. But now people in the city get to take part in the same suburbanized culture as everywhere else in the country.

I really don't have a problem with some number of fancy restaurants. For starters - they provide jobs. When you look at who busses the tables and serves the drinks, it's often times young people from the area. Furthermore, "fancy" people come in different flavors. Now, I happen to think that one group of upper middle class white people ragging on another group of upper middle class white people for largely aesthetic reasons (collar too popped, shirt too pink etc) is rather silly, but for what it's worth, the Murray Hill types that Vorwald and most people who comment on this blog despise don't go to places like Les Enfants, White Star, Brown Cafe, Bacaro etc. There are upscale establishments below Grand Street that are far out of reach for the lower income crowds, but in my opinion, they do not offend and they do not stick their collective thumb at the people towards whom they are not targeted. Even the hyper-gentrified stretch of orchard just below delancey has a much milder vibe than what's a block above. My point is that people have a very narrow conception of what the LES is. Down by Canal and East Broadway, around the Seward Park area, you still have a tremendous diversity which is deeply rooted in both the NYCHA projects and the Seward Park housing (more than half of which are still pre-market rate owners.) People who keep declaring the LES to be dead have never been down to Grand Street, and I think we'd like to keep it that way. (Whether or not this will stay is another question.)

But for those who complain about all this, honestly, why not just move to Bushwick or Greenpoint already? This city is constantly changing. 30-40 years ago, the Chinese population of downtown was a fraction of what it is now. They replaced someone, and now in some areas, they are being replaced. It's sad to lose history, but NYC is not, and never will be a museum.

Things were never really that edgy since the Triangle Shirt Factory fire in 1911. Fire escapes are for yunnies.

Coming to this late, but I just caught this article...

It's a little silly and literal to assume that the first time this guy ever set foot in the Lower East Side was 2003. If you've lived anywhere downtown, chances are you've probably spent significant time in the LES - or the East Village or 4 or 5 other neighborhoods. Yeah, the byline says he moved to Rivington and Ludlow six years ago. So what. I've lived in various parts of downtown for 14 years. Never once lived on the LES, but I can absolutely tell you what it was like in '97, in 2003, and today. That's the nature of living in this city. And by the way, it may not have been perfect in 2003, but the LES wasn't nearly the hotel district/fratbrat magnet it is today. NYC neighborhoods change fast, that's a given, but prodigal son is right - the LES was like NYC on douchebag steroids in the 2000s. It's funny to me that people seem more annoyed at this guy for pointing that out than they are with awful bars like Mason Dixon, Doghouse Saloon or Libation - all of which opened on the LES well after 2003 by the way.

Say what you will, but the article nails something we all know is true. And you don't need to have lived on the LES for 20 years to know it.