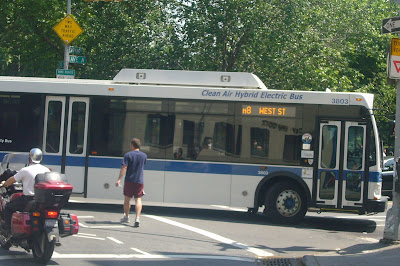 "Nearly every bus, subway and commuter rail rider in New York stands to be affected by a punishing slate of service cuts that was approved on Wednesday by the Metropolitan Transportation Authority, which is struggling to fill a sudden financial shortfall of more than $400 million." The M8, which connects the East Village to the West Village, is one again on the chopping block. According to the Times, none of the cuts would take effect until June at the earliest.
Posted by Grieve at 3:04 PM

Why shouldn't the M8 be cut? My understanding is that most crosstown busses move at normal walking pace or slower. If there is no way to speed them up, why run crosstown busses even if the MTA is flush with cash? What do they actually accomplish?

Actually the M8 is really handy and a necessity for a neighborhood that *has no train service*.

Well, I can't speak about the M8, but the M14A or 14D is a really frustrating ride during rush hour. I've exited the bus around Sixth Avenue and walked, getting to Second Avenue ahead of it...

To be clear, I'm not talking about the crosstown busses that run through Central Park. I'm talking about the ones that run in the traffic clogged streets south of 59th Street. There are actually three crosstown subway lines (the L, the 7, and whatever the yellow line is called that year) south of 59th Street. I know its not enough, but a bus that runs slower than I can walk is of no use at all. I've not figured out any quicker way to get to the west side than to just walk.

And the problem is mostly the traffic, so I don't get how surface transportation is involved in the solution. Get rid of the crosstown busses, maybe the other traffic flows a little faster and it becomes worth it to take a cab.

Bc when you live on Ave B and take it halfway across Manhattan in the winter, it's v.useful. It's the only public transport that goes through the middle half of the EV..

Well, you try walking from Avenue D to the West Side Highway when it's 20 degrees outside; for heaven's sake, this bus is a necessity. As has been oft-repeated on this blog and elsewhere, the M8 is the only village-to-village service. The M21, which the MTA offers as an alternative, is notoriously unreliable -- almost always late -- and the M14 is obscenely slow, not to mention stuffed to the gills at nearly all times of the day and night.

The real scandal here is that the MTA gets a smaller percentage of its operating funding than nearly every other transportation agency in the United States. They get federal money to run their bus service in Des Moines, Phoenix, Wichita, Santa Fe, name-the-city. We're expected to fully support the operation of our transport system because of the percentage of the population that actually rides is disproportionately high compared to the rest of the country. That's simply not fair. The Feds cough up money for the capital portion of the MTA's budget -- that is, for the actual trains and buses -- but contribute zero -- nothing! -- for the operations, including salaries, gas, upkeep, etc.

We've got to press for more equitable funding from the federal government. It's time New York City and its surrounding areas got its fair share of transportation funding. When the Feds are funding boondoggle light rail systems in the likes of Phoenix -- which attracts something like 40,000 rail riders a day -- but won't fund the millions-a-day ridership of New York, something's wrong! More people probably use the M8 bus each day than use the entire bus system in Des Moines.

Transportation is one of the most important lifebloods to a metropolitan area. Without it, we choke.

So instead of grousing about how people can just walk across town, how about voicing your support for your own city?

I love the M8 it's so much faster than the M14 and, as anon said, the only route from middle east to west.