Laundry loyalties on Avenue B

The new Quick Coin laundromat is now open on Avenue B near Fourth Street... in the former Carne Vale space... 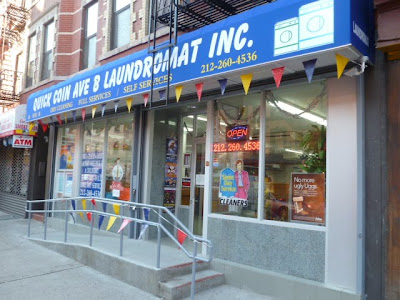 Meanwhile, a few doors to the south... the other, older laundromat is throwing a 20th anniversary special... 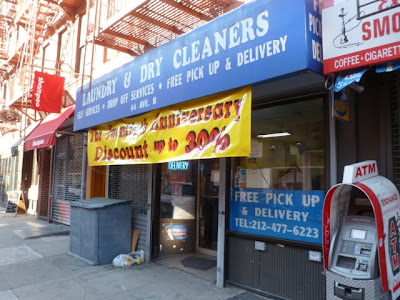 ...and just a few doors to the north... another laundromat ... (which is, I think, just drop-off service now, right?) 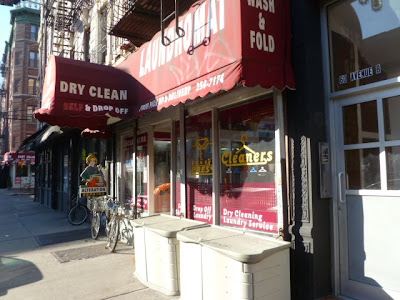 A reader told me that he feels guilty about using the new laundromat, but it is better, he says.
Posted by Grieve at 6:44 AM

Quick Coin has a laundromat on 1st ave and 11th as well and it is the best laundromat in the neighborhood by far. I have a friend who walks from 15th street to use it.

The one w/ the red awning in the last picture is awesome. They're on B between 4th and 5th, and I'm not even sure of the business name. They are wash and fold (not coin), and should be an example of customer service for all businesses.

1) they have a computer that holds all your customer account info: name, phone, address, credit card!
2) they have caller ID that automatically brings up your account for them when you call. so, if you need laundry picked up, all you have to say is "I'd like to have my laundry picked up please."
3) did I mention they SAVE your credit card number?? they do, and that is awesome.
4) If they miss your call, THEY CALL YOU BACK (or just send someone over to pick up your laundry).
5) everyone is nice and friendly.

I've been using them for 3-4 years and continue to be impressed by their common sense based customer service.

I still go to the older laundromat...I'm assuming the new one is a little more? What are the prices for a self-serve wash in the small washers?