Yesterday, we looked at the new greenstreet coming to First Street off Avenue A and East Houston Street ... all part of the three-year East Houston Street construction job expected to last through the summer of 2013... A greenstreet is also planned at Avenue D... so you will no longer be able to hit Second Street going 60 MPH off Houston... 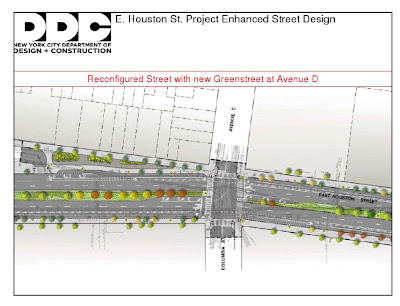 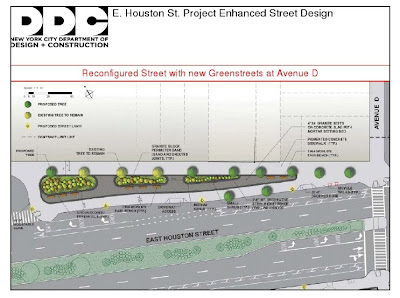 This intersection will likely look a whole lot different in three years or so... especially if that new development in the planning stages actually happens...

Long-threatened East Houston reconstruction starting this month
Posted by Grieve at 6:50 AM

eh, it looks better actually, now I don't have the temptation of turning on 2nd street and making a dash for it, customers will start to understand that we should continue up houston. also, the bike lanes with the curbs and parking lanes might add space for all the school busses, and parents' cars to pull over to pick up and drop off their kids, and it also gets rid of that combersome lane merge on houston heading east to the fdr from columbia street. this is actually a win, win. hopefully the extended curbs at the corners will not hinder the bicyclist as they meet with headphone wearing pedestrians.