Patrons accuse the Continental of discrimination 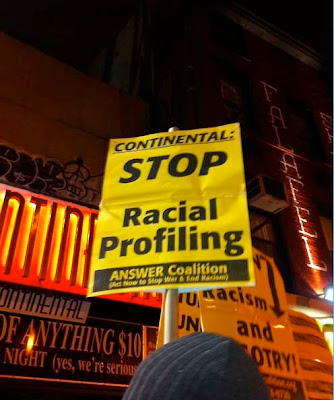 Neighborhoodr reports on a demonstration that occurred Friday evening outside the Continental on Third Avenue near St. Mark's Place. According to Neighborhood, "Those present were protesting against what they claimed is discrimination on the part of the bar’s bouncers. One woman, an African-American, claimed she was allegedly told 'Your kind don’t know how to act' by a bouncer when she tried to enter the bar."

The group was organized by The ANSWER Coalition. There is also a Facebook group called Boycott Continental Bar in NYC.

The Local East Village interviews Trigger Smith, the Continental's owner, who said his club isn't doing anything improper. Per the Local EV:

Mr. Smith, who is white, said that patrons were not being turned away because of the color of their skin but because the bar has a policy against admitting patrons who do not adhere to its unwritten dress code.

“It just so happens that more people of a certain minority wear these things than others,” Mr. Smith said. “But I don’t want white trash either, or Jersey Shore boys.”

He went on to say that he doesn't want to admit "frat boy" patrons either.

[Photo via Neighborhoodr]
Posted by Grieve at 11:52 AM

"of a certain minority?"

What a racist douche!

continental did not have a dress code nor did they have any preference on who should get in, before it revamped in 2006 (haven't been there for its new revamped version)

so, who are they actually letting in nowadays, only the rich, white, yuppies/yunnies and satc wannabes?

I don't know if the bar policy is racsist, it sure sounds that way, but I do know that at least one of their (black) bouncers is a straight up thug. I was walking home last fall and I saw that the bouncer had kicked out 3-4 guys, They were still having words on the street but the bouncer had cleared the patrons out of the roped off area. The patrons walk away, turn the corner onto St. Marks and the bouncer decides he hasn't had enough and chases them down, continues a verbal altercation and they all walk back towards the bar. The bouncer than challenges one of them to fight and after being continously provoked the patron raises his hands to the extremely large bounce and gets punched repeatedly, and is knocked to the ground. The bouncer also hit at least one of the guy's friends as well and they pulled the first victim away. This all happened around 7:30 in the evening.

I'm usually pro bar but no sane bouncer is going to chase people down to fight them.

The place has an "unwritten" dress code. How convenient. And this is the owner's last quote in the article: “You can’t have a free-for-all, especially when alcohol is involved.”

The guy sells five shots for ten bucks. I'd say that's a recipe for a free-for-all if ever I heard one!

Trust me, I know what I saw. I'd call a white bouncer a thug too if he kept on instigating a conflict that had ended. The bouncer left the door and walked from the Continental onto St. Marks looking for the patrons to come back to fight. This is the act of a thug, not a doorman.

If you want to accuse me of being a racist or using racially charged words you can go right ahead but I'm calling it as I see it.

Some of the bars on Christopher Street are doing the same thing. They aren't letting people in who wear doo rags (sp?), bandannas, or really sagging jeans. The business have every right to do this. Maybe if the stonewall did there wouldn't have been the recent gay bashing incidents.

shut the whole damn place down! god that place is disgusting! I literally saw 6 piles of vomit walking past there one night it was like streaming down the sidewalk into the gutter! ughhhhhhhhhhhhhhhh

A friend of mine got into an altercation with the bouncer here a while back because they wouldn't let the one black member of the group in. It definitely had nothing to do with some bullshit "dress code", they were a group of coworkers coming from an office. They simply singled out the one black member of the group and offered no explanation. Really nasty place. I'm glad these groups are bringing attention to it.

your area is a sxxt hole. also its the right of the bar to let in who they please.

I've probably been around a bit longer than most people on perusing this blog; so can somebody tell me when exactly the word "thug" became a word having any racial reference to it at all?

Obviousely the person who objected has some racial issues themselves.

"also its the right of the bar to let in who they please. "

Actually, no the bar does not have the right to turn people away based on race; it's against the law.

Sorry but there's nothing "racist" about this. Classist, maybe, but not racist. Dressing like a "thug" is not what certain "races" do - if you think that, YOU are the racist.

The word thug was used to describe the bouncer, not the patron that was turned away.

ok, well, my initial retort to his statement is: if you didn't want jersey shore/frat boys then why did you take out the rock n' roll stage and replace it with giant-screen sports tvs? hmmmmmm?

Ok, enough with the "thug" argument.

Maybe the ZIPPIES will have a protest here

Right, except that the people being turned away all happen to be of a certain skin tone (or more accurately, NOT of a certain skin tone). If you've been paying attention to the issue you'll realize that Continental's door policy has absolutely nothing to do with manner of dress. I live in the neighborhood and the bouncers at Continental have always found some excuse not to let me in regardless of what I'm wearing.

This is a total random comment but based on the times I've walked by the bar, I'd say the crowd was mostly minority? Not saying that's bad/good, just an honest observation. Although I have never been inside the place so I guess I really know nothing.

Only trashy people use the term "white trash." And calling people "Jersey Shore" is equally ignorant, since Situation-types are never actually *from* coastal NJ. I would know, being from there. Continental blows.

Anon 10:44 - maybe it looks minority outside the bar because they aren't being allowed inside? Just saying...

(I haven't been in there in at least 15 years, but it used to be a decent place with no cover charge to see bands.)

I've always had a bad feeling about that place... It gives me the creeps just walking by it... with the police-style barricades, and overall bad vibe. I've never even thought of going inside there...

The racist door policy has been tested many times at Continental. You can take two identically dressed men, one black, one white and the white one wili get in no problems. They always use the same excuse...if they can't find fault in the outfit, they always resort to "only regulars allowed tonight." Yet, the white patron will be allowed even if it's their first time there.