About the newspaper article in the Chez Betty Cafe front window

So C has taken over the Chez Betty Cafe space on East Third Street near Avenue C. Had never been inside, but I looked at the cafe's front window quite a bit... where there was an article from the Times on display. With one passage blacked out. (Later, someone placed a Yelp sticker over this.) 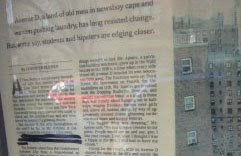 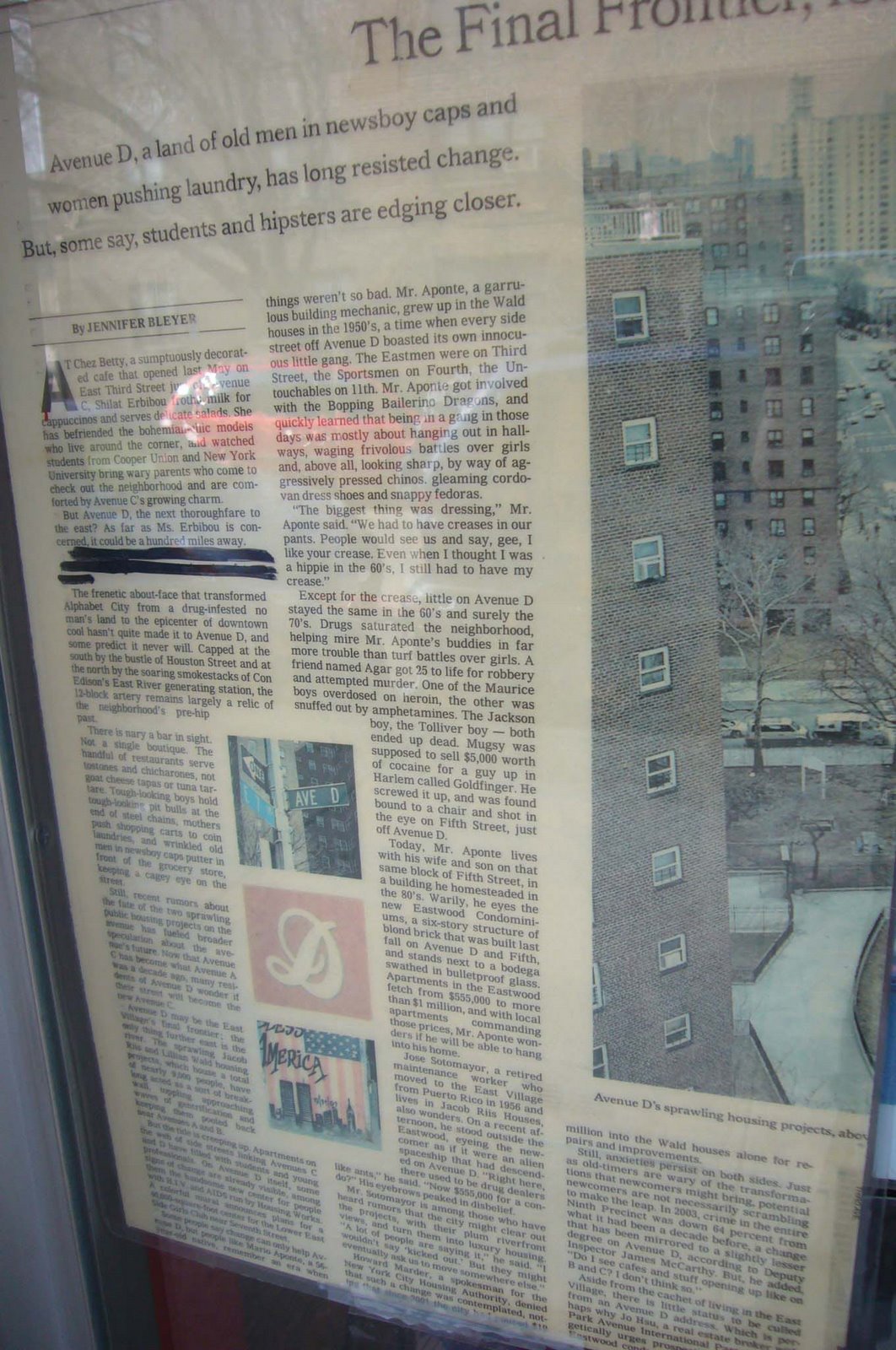 I always wondered what passage someone had blacked out. So I looked up the article. The piece is from March 2005:

At Chez Betty, a sumptuously decorated cafe that opened last May on East Third Street just off Avenue C, Shilat Erbibou froths milk for cappuccinos and serves delicate salads. She has befriended the bohemian-chic models who live around the corner, and watched students from Cooper Union and New York University bring wary parents who come to check out the neighborhood and are comforted by Avenue C's growing charm.

But Avenue D, the next thoroughfare to the east? As far as Ms. Erbibou is concerned, it could be a hundred miles away.

"I haven't been to Avenue D," she said with a shrug. "I don't think there's a future there."

Funny, I remember a time when you could have substituted the letters 'B' or 'C' for 'D', and you would have had what most peoples' opinions were at that point. Ms. Erbibou shouldn't hang out her 'Psychic' shingle any time soon.

wow. what a scumbag

I keep my fingers crossed that people *do* stay away from Avenue D. It's what's made the area livable.

Avenue D is a hellhole. People have been known to get shot in the face there. As long as that massive housing project remains across the street, Ave D will not be gentrified. My friend and his wife used to live on D and 3rd. They were glad about their decent sized apartment with a yard space, until they figured out that it wasn't quite safe for her to walk home at night (she worked at a restaurant). Eventually, my friend was picking her up after every shift. Cheap rent does not come without its price.

Chicharrones? Where??? I love those things!

They are supposed to dump this big luxury complex right at Avenue D and Houston Street. There are also a lot of very wealthy home owners on the side streets between C and D. East 7th street in particular has a number of single family and double family converted churches, town houses and other types. East 7th is also home to that luxury building with the self watering planters that pee on themselves. It's right off of Avenue D.