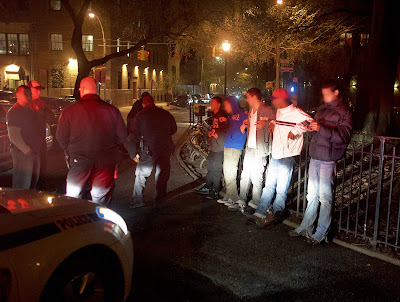 Last night around 11, there were reports of a man being beaten by a group of up to 10 young males on 10th Street at Avenue B. Bob Arihood took the above photo in Tompkins Square Park of the young men being detained by police (their faces have been blurred). They were held for 20 minutes or so then released. (Police left with the victim.) As Bob noted, it wasn't clear whether the pictured males were released because they were clearly innocent or because no one was pressing charges.
Posted by Grieve at 8:27 AM

This is an example that summer is coming soon...

Most likely the same kids that beat lesia pupshaw to death, and that pick on all the crust punks. Where in the world are these childrens parents? They look like they're 13 year old...

so f*cked up. wish they would target the yuppies instead!!!

Based on that comment, you are the one who is f*cked up. Encouraging violence is nothing short of sick and truly pathetic. People who aren't like you deserve to be targeted and beat up?

@Grieve - why even post that comment? I'm used to endless stereotyping by a few narrow-minded people who comment, but this has really gone too far. Violence is NEVER the answer.

Target yuppies for what? Having a job?

Where was this information taken from? Was it provided by a police blotter? Or was the report listened in on from a police scanner? How do you know the man was beaten?

@Glamma, so ugly and hateful.

@glamma - I'm thinking someone must have hijacked your name, because that's just sad.