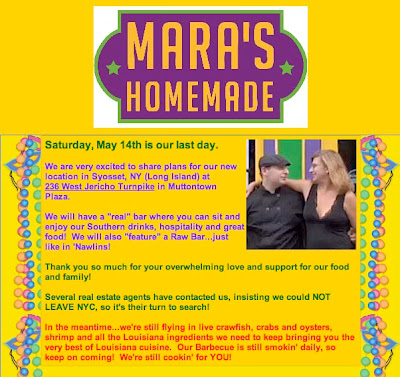 Thanks to the multiple tipsters who passed along this link... As previously reported, Mara's Homemade, the Cajun eatery on East Sixth Street, is closing for a number of reasons, including:

We accepted a short term lease to give us time to re-locate or negotiate a longer term with our current landlord. Since that time, the BP explosion took place, bike lanes were installed on First and Second Avenues which reduced parking and the signs of future property tax increases have occurred.

Meanwhile, May 14 is their last day ... and they're opening a new place in Syosset, which might be a better fit for all those people who apparently drive to Mara's to eat.

Previously.
Posted by Grieve at 11:18 AM

I love Mara's and will miss it, but blaming the bike lanes is ridiculous. Will have to eat there one last time with a pitcher of Abita...and will ride my bike to get there.

Meanwhile, May 14 is their last day ... and they're opening a new place in Syosset, which might be a better fit for all those people who apparently drive to Mara's to eat.

Never had a good meal there. NEVER. In fact, to be honest - it sucked. Not to be curmudgeonly, when a place like this or Loves Saves the Day closes, it's no loss really. Even CB's should have been put out of its misery a decade sooner.

good effing riddance! had one of the worst meals I've ever had in my life there. "shrimp and grits" that came out after a 45 minute wait, was cold, and included four tiny nasty frozen shrimp seemingly pulled out of a shitty eggroll they found in the trash outside. awful, and an embarrassment to Southern cuisine in general.

Jeez, Mara's is/was not THAT bad. Sure, definitely not the best Louisiana food, but serviceable in an area with little Southern options.

And how this turned into ripping on former EV institutions like CBGB and Love Saves the Day is beyond me. Having places like these were absolutely a good thing for EV, and losing them inarguably sucked. Look at what replaced each (another ramen place and a luxury fashion boutique, respectively). Which would we rather have?

First of all Mara's sucked, I mean really sucked, and no one in the nabe ever went to LSD to buy anything - only Japanese, Midwestern and European tourists.

Second of all, if you can believe this, as someone who remembers Patti Smith, Tom Verlaine, Richard Hell et al. at CB's what happened there was heartbreaking.

But you know what? I don't wear ripped prom dresses and a motorcycle jacket anymore - and when I see some who is caught in that time warp - it hurts.

Finally, I don't think anyone who actually came here during the time everyone is dying to preserve (and every wave before) thinks that BUSINESSES are why we came. We came for those that came before us and because there was cheap real estate and drugs and people like us - high school outcasts (hell, life outcasts).

There are some BUSINESSES to wax rhapsodic about - Club 82, Club 57, Orchidia, Karpaty's (figure that one out, ha.) - but prob. the truest thing about the EV had been that stuff changes but the spirit remains the same. Unfortunately that does not seem to be the case in this iteration - but it may come around again in a 100 years. Who knows?