Meanwhile, many residents are mourning the loss of the majestic willow tree that has graced La Cultural Plaza since the 1970s ... The winds and soaking rain of Hurricane Irene helped to uproot the tree on Avenue C at Ninth Street... 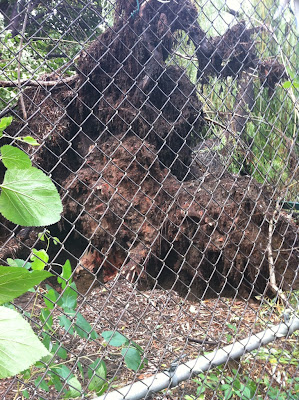 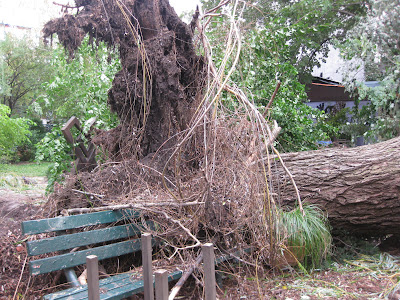 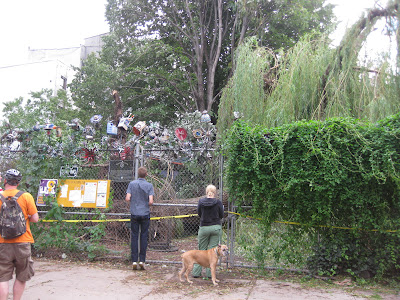 At the Times yesterday, Colin Moynihan wrote about the significance of the tree to the neighborhood.

The gardeners who run La Plaza, as it is called in the neighborhood, staved off several attempts at the garden’s development in the 1980s and ’90s. During those battles, the tall willow was embraced as a symbol of resistance and its likeness appeared on fliers and posters urging neighbors to oppose planned takeovers.

You can read more about the tree's symbolism here.

Melanie has another shot of the downed tree here at East Village Corner.

I've exchanged emails with Ross Martin, who's in charge of general maintenance and capital projects for La Plaza. I've been trying to get an assessment of the damage, and some possible next steps. Unfortunately, in the last few days, he hasn't been able to get anyone to take a look at the tree, and he has tried everyone from the the Parks Department to Rosie Mendez's office to professional tree services, to name a few. 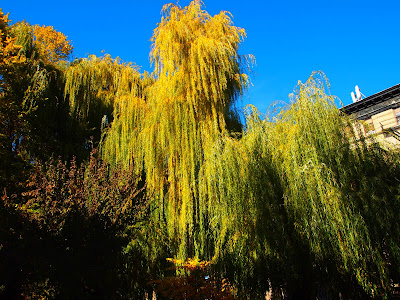 I hope they can plant another williow in the same space.

I hope they invest in the care and pruning that the remaining willows need. It's a miracle that the one just to the west didn't meet the same fate - it has quite a number of limbs that are dead or dying.

I used to look at that willow from my bedroom window every night when I lived across the street on 9th/C. It was a perfect view.

Sad to hear the news.