About The Bean's East Village expansion 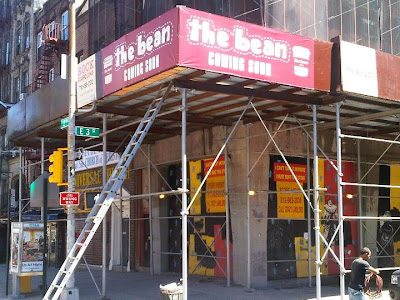 On Monday, we broke the news that Bean is expanding its East Village presence to include a storefront on First Avenue at Ninth Street... to go alongside their original location at First Avenue and Third Street, Broadway and East 12th Street and the Crazy Landlord building.

It's a pretty exciting time for The Bean and we wanted to let the East Village community know what's going on.

The Plan: we're opening two more cafes around the East Village. We don't really think of this as an "aggressive" business move as The Bean remains an independently owned and operated neighborhood business. We haven't "sold out" or "gone corporate" and we've had this expansion in mind for sometime. Our cafes' walls will still feature the artwork and photography of East Village artists and photographers and we're super excited to ably to service more of our friendly & loyal customers in the East Village — old and new — whether they're just stopping in for a quick cup of coffee or penning the next great American novel sitting in one of our cafes.

Ultimately we'd rather open a business to service the neighborhood than have another bank or fast food restaurant further de-characterize the East Village.

The Bean remains committed to our customers, their dogs and — as always — we're open to suggestions. Just no poetry readings. :)

At Fork in the Road, our friend Rebecca Marx mentions Joe the Art of Coffee, an independently owned shop with seven locations in different parts of the city. "So while it's nice to see East Village storefronts being snapped up by a local business that isn't Duane Reade, one wonders if the Bean's owners would do better to spread out the wealth a little bit," she writes.

Some readers have chimed in on the topic on the previous post. A reader left this comment last night:

"2 new shops in the neighborhood opening simultaneously is clearly aggressive, especially since one is on the same block as Mud

The amount of money it takes to pull this off is huge. Market saturation is a ruthless corporate strategy, mom & pop shops don't have the resources and are usually a bit more sensitive to their neighborhood...no way is it independent."

Email ThisBlogThis!Share to TwitterShare to FacebookShare to Pinterest
Labels: East Village, the Bean

I'm fine with it, but I just get worried about people on their way to UCB Theatre, saying "No worries" and "Cheers" in their flip-flops. BURN IN HELL!

i have no trouble with the Bean, but any time i hear that tired old "it's better than a bank" argument (threat), i want to hit someone.

The one thing that I haven't heard an answer to is why in the world they need two on the same block - 1st and 3rd and 2nd and 3rd? Is this a knock on how lazy we've become or is it a comment on the difference an avenue makes?

I wonder what Sam wonders. Two outposts a block apart?? (And I'm not saying out of bitterness because I'll miss the Crazy Landlord sign, I swear.)

I like the Bean. I just hope they don't *over* expand - I'd be really sad if this expansion proved to be too much, too fast.

It takes a diversity of businesses to sustain a neighborhood. Over saturation of a particular business (chain or indy --- whether it's restaurants, coffee shops, or ice cream parlors), offer few benefits to neighborhood residents, except for those residents wanting to live in a sort of theme-park.

I like the Bean. I like that there is a place to sit inside or out and meet my neighbors. Wheteher I'm meeting a friend there or sitting on my own, I usually end up chatting to someone. I think places like this sustain neighborhoods and I don't think there is anything to fear of closely placed shops. It may not be a brilliant business move, but I don't see it as a threat.