The most recent bars to inhabit 505 E. 12th St. — Mundial and Totem — were nightmares for some nearby residents here on the block just east of Avenue A.

Recently, residents have noted that workers are busy renovating the space... which is fine, except that there aren't any work permits on file with the DOB.

Per one neighbor: "The work furiously continues on the former Mundial space ... with no sign of a work permit. They were working on the space well into the night last night." 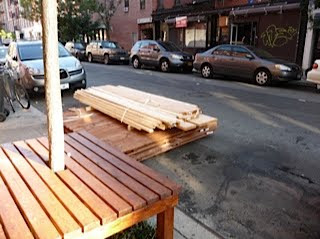 "They got a lumber delivery a little after 8 this morning, and one of the guys who is working on the space is hustling to get it all inside." 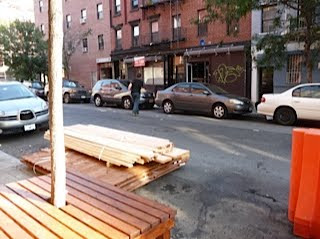 "Why do I get the feeling that whatever this space is going to be, it isn’t going to be a good neighbor?" 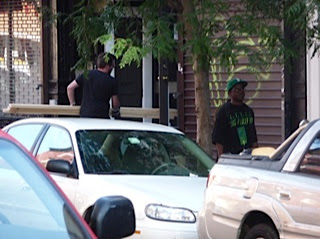 People should know by now: You don't fuck with 12th Street.

Does anyone know who put those big orange blocks in front of Rawvolution? I thought the city put them there for some reason but the people working on the 505 space moved them yesterday to make room for a garbage truck they were hauling trash out to and they moved them again today to make room for the wood delivery. Are they just moving blocks the city put there or did they put the blocks there? We are losing at least two, maybe three parking spaces because of these things. There is a big sheet of metal covering a spot on the road there so maybe the city did put them there? Looks suspicious. In any case it's not up to the people from 505 to just move them whenever they want to make way for their stuff.

The guy bringing the wood in just slide the orange blocks back into place. This is not right. Off to work now. They'll have roped off the entire street by the time I get back!

It looks like the operators of this establishment are doing just fine fucking with the people of 12th Street. They've been working their buzz saw all day long. The double standard is blaring. If Ray works without a hair net, he gets shut down. If a bunch of yuppie guys build their own bar and deck without a permit, they get a free pass.

Ken is right. My building on E 4th has been going through hellish renovations. I'm surprized by how reticent people are to call 311 (and to be honest, that includes myself!). If the time comes where action has to be taken, such as bringing an issue up before a CB meeting, then a history of 311 calls is a huge piece of your case. I'm sure I don't have to tell the folks on E 12th, but for anyone out there experiencing construction nightmares, or noisy and obnoxious nightlife...call!

Well you know a little epoxy can ruin someones day. Over and over again.

I called the DOB two days ago. Nothing happened. They got away with it. Score one for them, zero for the neighbors. They've probably built an addition on the roof of the building by now and taken over four more parking spaces. Haven't dared to check today. :)

Many new people have no respect for their neighbors. There are people living in that building for years who don't deserve the noise and disrespect.

Just to get your goat, they are working in there again today. Calling 311 does shite.

I live on the block & talked to the owner. The DOB inspector actually came while I was there! He was shaking his head because of all the complaints & it was his second time there & they still weren't doing anything requiring a permit. I looked it up and the law is that only major structural renovations require a building permit. You don't need a permit to pick up a hammer?? Everyone seemed nice there.

No one ever wants a bar near their home, but it is the East Village. I'm just hoping they're a good neighbor, but I understand as a bar, they'll be playing music...and I'm not rooting against them...

Any more details on what type of bar this will be, etc.?

They said something about a neighborhood bar with 4-star southern food...? It sounded like more of an early place with brunch, happy hour, etc. I'm sure if you catch the owner there, she'll talk to anyone. The good news was that they're almost done with the loud stuff and will be just decorating soon.

Yeah, i'm afraid y'all need to chill. New York changes - that's its nature, that's how it survives. A new bar going into a spot where an old bar used to be isn't something you should spend your time worrying about; it happens every day in the E.V.

Your 311 calls have been effective! An inspector has been there -- twice. Both times, they looked things over, checked the paperwork, wished the owner/contractor luck, and left.

Roadhouse-style place, w/ Southern food. Owned by a great lady who used to bartend @ Edge on 3rd St. Should be a cool addition to a street now lacking Old Devil Moon, & a neighborhood now lacking Acme ....

It's always fun when some noob comes here and tells us we "need to chill, y'all." And extra laughs for "New York's nature."

You've clearly been here for all of ten minutes, but please, dear: Do school me on what New York and the East Village are ABOUT. It will keep me laughing until you inevitably return to whatever cornball place you're actually from.

Good luck with the new bar, though.

Work on the place would probably have gone mostly unnoticed if it hadn't gone on "into the night." That's likely what called into question whether or not your restaurant will be "a good neighbor."

It's not my restaurant, "dear." Does belong to a freind of mine, tho, who's lived/worked in the EVill for years.
Me? I've lived here since '94, and been postin on this site for a while. So eat it.

@ Ken: Your point is taken, sir. The contractor (the guy in the pic, actually) also reads this blog, and now that perhaps he too sees your point, let's hope relations w/ the locals improves.
Oh, and he's lived in the EV longer than I have.
I'm not trying to "school" anybody on NYC, "dear"- but if you live here, then you know: this stuff happens every freakin' day. It's the IHOPs & chain retailers you should be concerning yourself with, not small businesses owned/operated by locals. That's all I's tryin' to say.
So yeah - chill.

So I can't be annoyed by IHOP *and* bars? Thanks for letting me know what I am allowed to concern myself with, bro.

People in this end of the hood are annoyed by bars because we don't need more of them. It's not about small business. It's about the fact that the new businesses are invariably bars, and that "every freaking day" we lose more and more to these yuppie watering holes.

But I really have no objection to your friend's bar. Go nuts, "y'all." The neighborhood has already been lost. I just didn't like the lecturey tone of your original comment, and responded in kind.

There's a talented designer working on the space. It will be spectacular!