The former Schnitz space is for rent 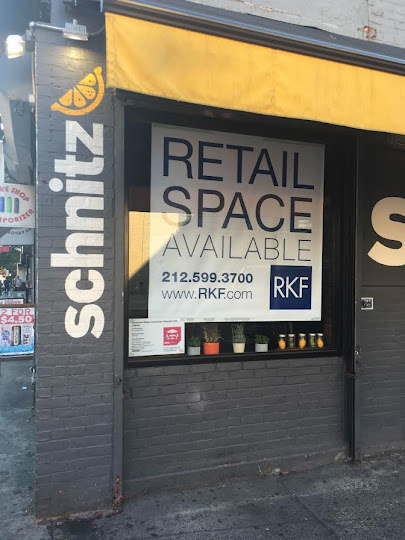 Shepard Fairey is wrapping up work on his mural on East 11th Street at First Avenue... above the space that housed Schnitz.

Several people said that they weren't aware that the sandwich specialists had closed.

We noted on Sept. 2 that the quick-serve restaurant hadn't been open in several weeks ... and that the storefront was listed for rent online.

The retail space for lease sign has been up for maybe two weeks now. According to the listing (PDF) at RKF, the asking rent is roughly $9,100 a month.

No one from Schnitz has responded about the closure via social media yet.

Schnitz, which served old-fashioned schnitzel sandwiches with unconventional toppings, opened here in March 2014. This was the first permanent retail space for Schnitz after gaining a following at Smorgasburg in Williamsburg and Dumbo.

Email ThisBlogThis!Share to TwitterShare to FacebookShare to Pinterest
Labels: restaurants that are now closed, Schnitz

Too many cutesie food places.. You need to either have an amazing tasty offering, or provide a fullish meal for value to last, ideally both.

How long was Victors Meat Market in that space, 75 years ?

This is one fucked up city now.

I went once. I'm not being a jerk when I say: it wasn't memorable.

Victor's was actually on 13th and 1st but point well taken...

Actually, before "Something Sweet" this was Black Forest Bakery. (I'm not wrong about this; Black Forest was there at least through the 80s and 90s.)

I pass by a lots of these places in all areas. And 50% are open windowed, bars too. I don't know how they stay in business with such low turnout. These places seem to operate like mafia social clubs. Or vessels to launder money.

You are correct, Scuba Diva, it was the Black Forest Bakery decades ago. I have relatives from the Black Forest, so I always loved going there. Then it turned into Something Sweet, again for many years, and then we lost it to a place that can't even make it for two. Sad.

I loved the food at Schnitz. But most folks do not like really fatty food, which this was, well prepared, tasty fatty food.