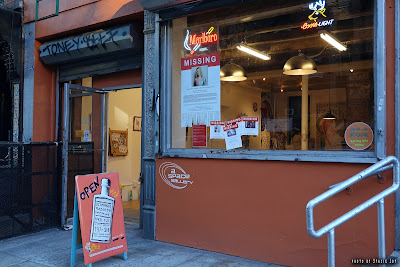 Text and photos by Stacie Joy
It’s the night before Leopold Masterson’s gallery exhibit Diamonds, Razors & Champagne (now open at 3rd & B’zaar, 191 E. Third St. between Avenue A and Avenue B) is set to open and the artist/curator pauses to take a sip of beer as he looks around the space with a critical eye.
He makes some last-minute micro-adjustments before stopping to chat with me about the show, his penchant for trolling, and how he sees social media and consumer culture’s influence within the artworld. 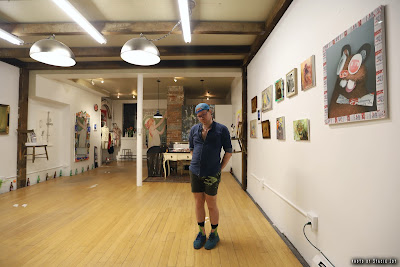 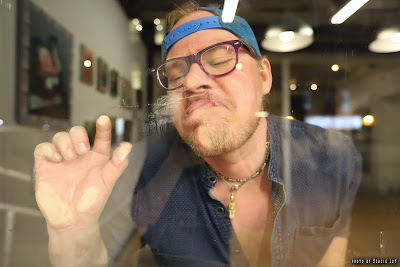 What is the inspiration behind your Diamonds, Razors & Champagne show, and how did it come to be located in the 3rd & B’zaar space?
The original idea began forming years ago when I was doing more internet trolling. At the time, I was aiming to change the focus of the public and visual culture using media techniques and fictitious narratives. It was a new way of creating and engaging with art after having developed as an object-maker.
I began hypothesizing an exhibition that went beyond objects to encompass live performance, experiences and direct art sales, which would give people the chance to touch artwork from across time. I came to be associated with the great crew of 3rd & B’zaar through my close friends Maegan [Hayward] and Alex [Carpenter] at the East Village Vintage Collective (EVVC).
Before the pandemic, I had my art studio at EVVC for more than three years. As life had drastically changed for all of us, I decided to make a move to expand not just my studio space but also my vision for my entire art practice, so I rammed everything together and applied for a PPP loan as a sole proprietor.
After doing all my due diligence I utilized the money to rent the space and push out the exhibition. Right now, the long-term status of everything seems so volatile that I think sharing spaces for periods of time in a collective model has the most potential for expanding the horizons for communities. So here I am until April 23. 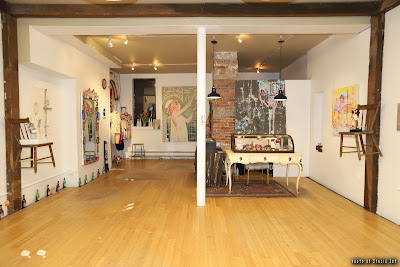 There are more than 15 artists represented in the show and lots of different media, what was the curatorial process like?
To me, a huge part of curating is talking to as many artists and visiting as many studios as possible. Obviously, 2020 kneecapped the studio visits. Of course, I still found some of the artists on the internet and randomly reached out, even though that is usually a crapshoot.
But another important part for me was that if I was going to represent an artist or entity in the exhibition, I felt compelled to have a historic example that could take the pieces from the present to the past and back again. I love having $20 tee shirts alongside multi-thousand-dollar jewels. Sam Gassman’s rag take on Karl Hagenauer’s bronze Art Deco drunk sailor is a perfect encapsulation of this rags or riches conversation.
I also have reproductions of 2D works ranging from the 1780s to the early 21st century with artists such as Jim Tozzi, Carpo, and myself reworking those pieces to bring them into conversation with the past, and adding our sense of humor to them.
I also have to say that I don’t work with artists that have bad attitudes or feel endlessly entitled. Everyone involved is sincere and engaged and that is critical as a curator so I don’t begin wondering whether that electrical cord could support my weight hanging from the ceiling. 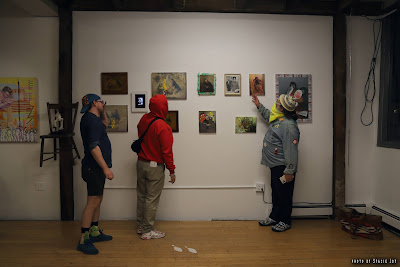 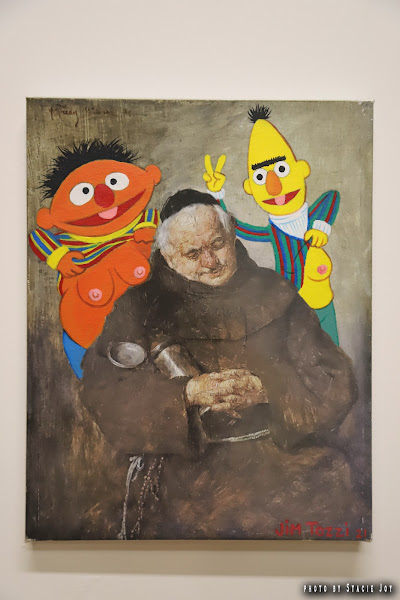 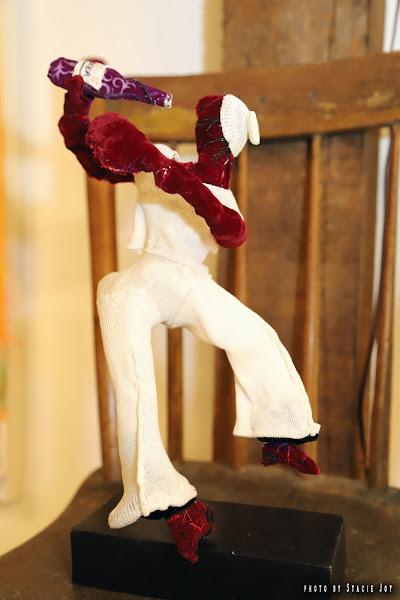 The exhibition statement reads, in part, “This exhibition manifests our growing tendency to overindulge our senses and seek out newer and stronger addictions.” What role does desire play in this show? Consumer culture? Social media?
That idea stemmed from watching the churn of epidemics, addictions, and luxury hedonism metastasize and cascade completely out of control. I remember growing up in the 1990s and “millionaires” were special. Now stocks and art markets are practically indistinguishable and the invisible hand is groping around for the next great commodification.
The fact that there is a new company creating blockchains for speculating on people’s reputations (i.e., BitClout) is in no way surprising. It’s just a way to monetize the need for fans, which drives a large section of our culture.
To succeed in that market, you have to have the perfect body, have all the right kinks, and constantly be doing more to feed the desires of your fans. There is a collaborative video with Ben Peterson of the two of us puking in buckets and throwing pottery as we pushed to be the best. We strove to WIN to the point of toxicity, which is basically the story of social media.
Unfortunately, social media has devolved into little more than the basic capitalist model of selling products via prescribed standards of beauty. So come take a selfie with our products presented and sold via our lower standard of beauty!
What has the reaction been so far to the show?
The reaction has been hysterical and very positive. I have a rather crackpot sense of humor and love to swear so my celebrity missing posters and silly-ass wine bottles taped to lamp posts have driven a lot of attention to the gallery.
The concept of the exhibition is a slow burn and it is ramping up this weekend and as it continues until the closing party on Thursday, April 22. I also think people are just excited to be in a physical space again, even though they still have to follow the standard safety protocols. You can even come inside after taking a selfie with the Britney missing poster! It’s been fun and exciting to give some people a little release, even with the prophylactics in the way.
What’s next for you as an artist?
Probably some light prostitution, basic entry-level stuff if I’m lucky. But really, I do enjoy being my own curator, gallerist, publicist, archivist, photographer, designer, artist and entrepreneur, though I have to admit I am reaching a point with my career where I probably need to have a discussion with some established galleries and arts professionals.
I am so accustomed to carving my own pathway and selling artwork on my own that I have a lot of trepidation over losing control of my practice and the multifaceted approach I have employed to continue to grow artistically. After I “come down” from the exhibition I intend to rent another space in the neighborhood and see what happens next. 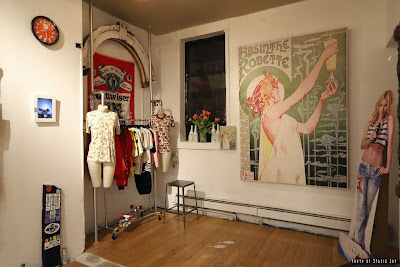 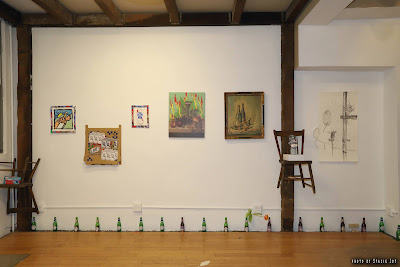 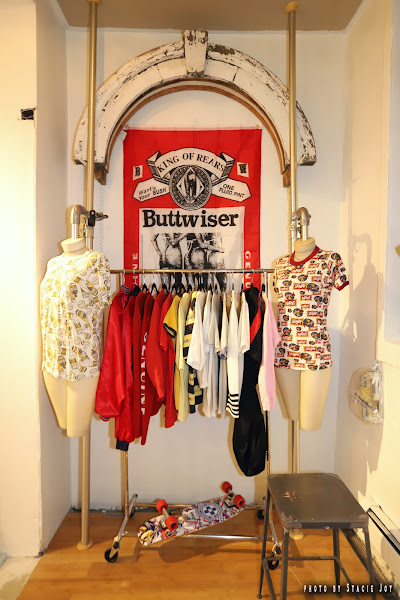 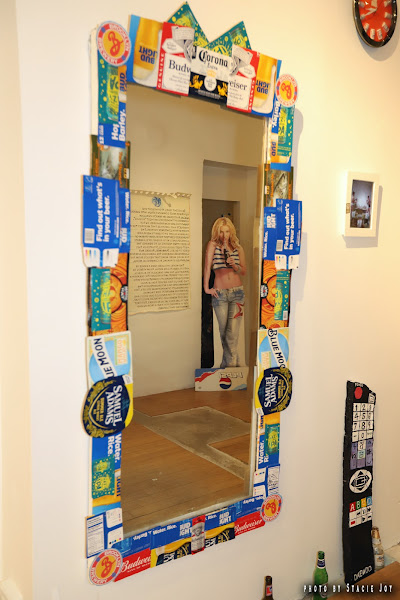 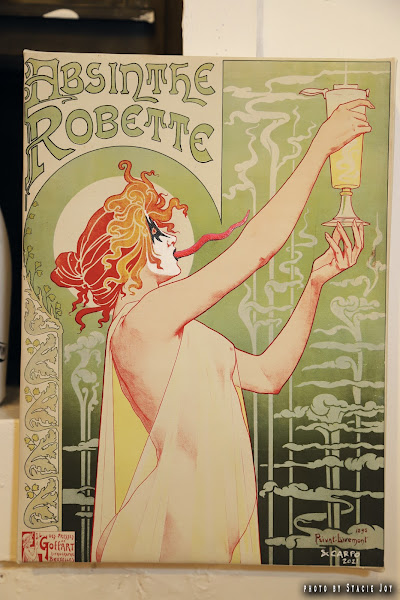 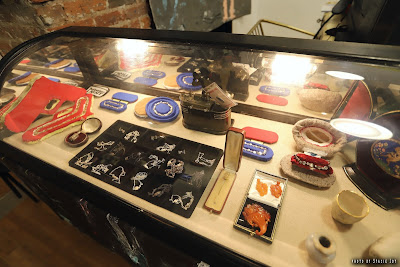 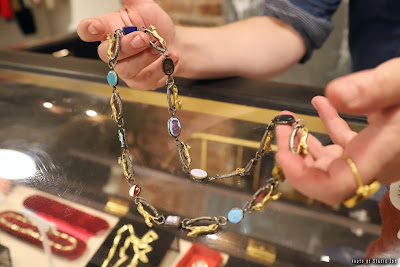 The show is open from noon to 8 p.m. daily until Friday, April 23. You can keep up with the artist on Instagram here.
Posted by Grieve at 6:00 AM

Email ThisBlogThis!Share to TwitterShare to FacebookShare to Pinterest
Labels: 3rd & B’Zaar, A visit to, Stacie Joy

Thank you for the great time Stacie and Ev Grieve! I haven't been that entertained since my last lobotomy... well I don't really remember it but the remaining voices in my head told me it was great!

But in all seriousness I think it is critical that RIGHT NOW creatives in all generas work together to reinforce and 'Build Back Better' (is it bad to mock that?) The City in OUR collective images not that of corporations or for profit entities. Anyone can reach out to me with ideas or thoughts! LM

Personally that piece speaks to my current breastfeeding insomnia haze.