A new home for this Citi Bike docking station 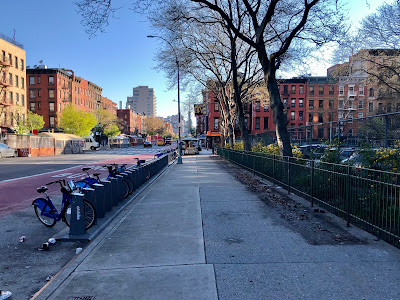 An EVG reader told us that the Citi Bike docking station on the east side of First Avenue between Fifth Street and Sixth Street has been moved (as of yesterday) ... from the sidewalk to the roadway.
The station with 51 docks arrived here in December 2019. At the time, some residents complained that the docking station took up too much sidewalk space.
Now, as the reader noted, the docking station takes the place of several parking spaces ... including a spot for the fruit vendor's van, which was spotted around the corner... 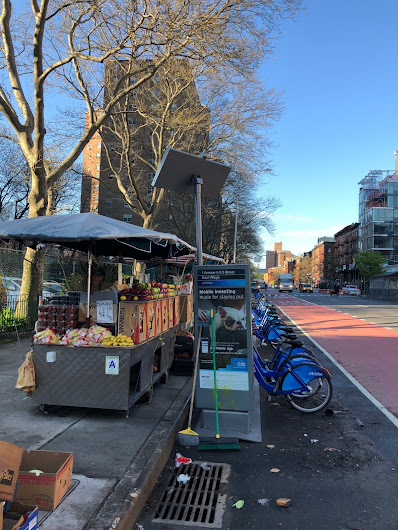 Wonderful
Now everyone can return to having their dogs shitting and pissing on the sidewalk all along that fence.

I wasn't a huge fan of them on the sidewalk there, but, damn, it seems kinda dangerous to have them next to a bus lane. Maybe it's just me.

Retrieve and return bikes at your own risk!

Anti Car Move but riding a bicycle in NYC is far from safe.

Incredibly dangerous. God bless this city and their master plan to gum up everything!

That's a very wide sidewalk. There was plenty of space for both bike dock and pedestrians.

I live in Village View right next to this docking station - honestly I had no issues with it. The sidewalk is very wide there, and there was plenty of room to move by - especially considering it's in front of our parking lots, not stores.

It seems dangerous now in the roadway, where there's a risk of getting hit by buses, other bikers, trucks, etc.

Wonderful! So great! The sidewalk was crowded, the cars never moved!

Although if you're riding a bike in NYC (or even walking down the sidewalk!) and you dont pay attention to what's coming at you or towards you then you're not going to PHYSICALLY last too long here.

Bicycling in NYC is inherently dangerous. Always has been, always will be. That is a fact as immutable as the existence of gravity.

Every bike rider ought to know (and acknowledge) that they're taking their life into their hands to ride a bike on the streets of NYC. If you're looking for biking nirvana, NYC ain't it.

How long before the first out of control driver on 1st takes out the entire row of Citibikes?

“If you're riding a bike in NYC (or even walking down the sidewalk!) and you dont pay attention to what's coming at you or towards you...”

Why do people think it’s on the city, state, or federal government to protect them? Pay attention, be diligent, or don’t use the Citi Bikes.

Same thing applies for riding a personal bike. Or driving a vehicle. Or anything else similar.

Abandoning your freedom of choice to an organization under the guise of protection is stupid. Same could be said for a lot of things people seem to want the government to handle for them.

How about walking? Are you entitled to be safe when walking on a sidewalk in the street?

That sidewalk is wide I think they should have stayed there. Safer for us using them and wouldn't wipe out all that parking. There are way too many citibike stations now anyway, they're massive. Advertising for Citibank everywhere.

What I don't understand is, why the docks are not angled toward the correct direction.

None dare call it fascism, this merging of State and Corporate.

But this is how fascism works. Its banal, and people like it.

Super dangerous for everyone.
And completely unfair to bus drivers who have a really tough job

@8:34 I wonder too. If the docks were on the sidewalk but angled properly, they would take up less space. Other stations have angled parking.