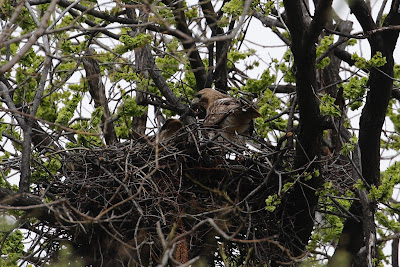 It appears that at least one egg belonging to Amelia and Christo, the resident red-tailed hawks of Tompkins Square Park, has hatched. (And thanks to Steven for these photos!)
Goggla has been keeping an eye on the nest and has noticed a change in behavior starting on Tuesday evening... as the two went into parenting mode.
Per Goggla:

Christo perched on the edge of the nest while Amelia stayed inside. He appeared to be watching and/or waiting, something we've seen him do on hatch days in previous years. The hawks stayed in this position for over two hours, which is also notable. Finally, Amelia got up and the two of them fussed around with some food, Christo watching as Amelia tore it up, then went through the motions of feeding a chick deep in the nest. 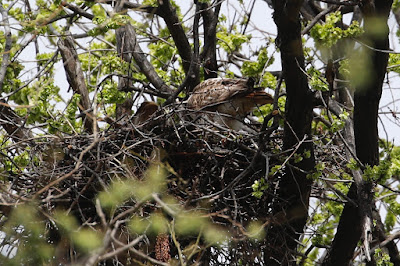 What's going on up there?

We have no idea how many eggs or chicks there are in the nest, but can expect 1-3 nestlings. It may be another week or so before we catch a glimpse of any fuzzy white heads peeking over the edge of the nest, so we'll have to wait and be surprised.

Head over to Goggla's site for more details... plus check out her video of Christo riding out the hailstorm on Wednesday from atop St Nicholas of Myra on Avenue A and 10th Street.
Posted by Grieve at 9:30 AM

So exciting! I know many of us got a little entertainment the last miserable year from watching the young hawks grow up in TSP.

Does one dare to hope that one of the many East Village Galleries will one day soon have an exhibition of Steven's bird pictures? From EVG posting to reality. Go Steven!! A friend from Grassroots Days.