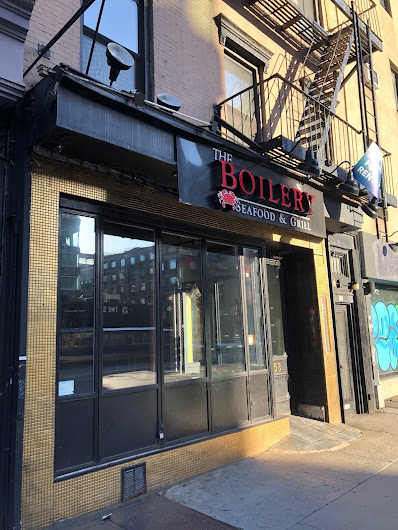 The first of two April CB3 SLA committee meetings happens tonight via Zoom.
Here's a look at three new liquor license applications in the East Village:
• The Tiger Lily Kitchen (Elvis' Cafe LLC), 58 Third Ave.
Hospitality veteran Michelle Morgan is looking to bring the Tiger Lily Kitchen to the former Boilery space here between 10th Street and 11th Street.
Morgan opened Tiger Lily, which serves "healthy Asian-inspired cooking with gluten-free and vegan options," late last year as a takeout and delivery operation at 293 Third Ave. between 22nd Street and 23rd Street. This space would allow for her to offer indoor dining.
For a look at their lunch and dinner options, you can check out the Tiger Lily Instagram here. The application for the address is on the CB3 website.
• Lamia's Fish Market (East Coast Fish Market Inc), 45 Avenue B
Lamia's Fish Market is seeking an upgrade from beer-wine to a full liquor license here between Second Street and Third Street.
Lamia Funti, the applicant, appeared before CB3's SLA committee meeting in April 2016. The application was reportedly denied based in part on the history of the space. (The Lo-Down reported on this here. And DNAinfo here.)

Media outlets previously identified Funti as the co-owner of Le Souk on La Guardia Place along with her husband Marcus Jacobs. He was reportedly an owner of Le Souk, a years-long thorn in the side of Avenue B neighbors, as reported and here ... and here.

In October 2009, the State Liquor Authority canceled Le Souk's liquor license. (Read the SLA release here.)
Despite the 2016 committee denial, Lamia's received the beer-wine license via the State Liquor Authority later that fall.
You can read Lamia's questionnaire on the CB3 website at this link.
• Little Rebel (K&L Hospitality LLC), 219 Second Ave.
A bar-gastropub called Little Rebel is in the works for the former Professor Thom's space on Second Avenue between 13th Street and 14th Street.
You can read more about the plans that owners Dermot Lynch and Jarek Krukow have for the space — as well as see a sample menu —via their questionnaire here.
Tonight's meeting starts at 6:30. You can find the Zoom info here.
Posted by Grieve at 5:15 AM

I looked at the questionnaire for Little Rebel. Any plan with bouncers in it is worrisome.

Maybe the burbs are best for you. The city that never sleeps isn't for you. Let's make nyc just like every other boring city and charge 5x the rent. Makes no sense.

They do if they want to maximize profit for their owners. You know, the whole point of running a business. Go back to Ohio.

What is this nonsense about bars not staying open until 4am? Plenty of people like to go to bars that late and it has been a norm in this city for decades.

With respect to Lamia's, people really need to get over this "they want to be a night club" nonsense. It's a beautiful restaurant they clearly poured a ton of money into and it's also clearly not set up as a "club". If they prove to be bad actors punish them but over the course of their operation it proven to be a well-done, friendly restaurant with great food. They should have the ability to sell liquor like every other restaurant.

The bigger crime is that most club DJ's don't have respect for listenable audio levels or ear drums.

Lamia's Fish Bar makes me nervous. It's got nouveau riche meatpacking club vibes all over it if they have a liquor license. I know they won't be able to keep that outdoor street house structure thing forever but for the time being how does that work that they say they won't serve alochol outside? That lower Ave B has been straight BATTERED by drunk brunch morons increasingly over the past decade (mostly due to Poco I'm sure).

The Hairy Lemon, Eastpoint and Mama's are truly dreadful.
Poco is actually cute during the week (decent food, good cocktails and great service). Im not affiliated with them whatsoever, fyi.

You live in Manhattan and you’re complaining about bars opening. Do you really want to be that person? There’s plenty of other places to live a quieter life. (Pretty much anywhere else)