Reminders: March to save East River Park on Sunday 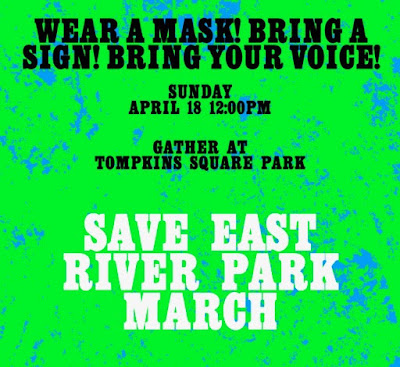 There's a "Save East River Park March" on Sunday... those who wish to join in with organizers East River Park Action can meet at noon in Tompkins Square Park. (Per the invite, at the "semicircle with the big elm tree near the southeast entrance.")
From Tompkins, the group will march to the East River Park Amphitheater for a rally at 1:30. (Details here.) 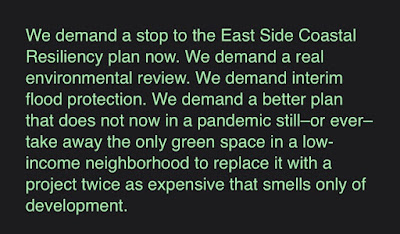 The march takes place as the city officially kicked off the East Side Coastal Resiliency Project yesterday via an announcement by Mayor de Blasio.

We don’t need to imagine what climate change will do to our city. We saw it first hand during Superstorm Sandy — and our coastal communities paid the price.

The East Side Coastal Resiliency Project is how we fight back for our city and our planet. pic.twitter.com/dK7NSxGLsM

"Building a recovery for all of us means fighting climate change and investing in resilient communities,” he said in a press release. "This project will keep generations of New Yorkers safe from extreme weather, coastal storm, and rising sea levels — all while preserving and improving some of our city’s most iconic open spaces."
Work started in Stuyvesant Cove back in December on what is being called Project Area 2.
As for East River Park, in the city's current plan, which has been met with outrage by community members, workers will raze the 57.5-acre plot of land. bulldozing 1,000 mature trees and rebuilding the park atop eight feet of landfill meant to protect the Lower East Side and surrounding neighborhoods from a 100-year-flood event and sea-level rise.
In October 2019, the city announced that they would phase in the construction so only portions of the park are closed to the public at any given time. According to various reports, the city has committed to leaving a minimum of 42 percent of East River Park open to the public. It is projected to be completed in 2025.
Previously on EV Grieve:
• City tries again with release of a Value Engineering Study for East River Park
• Report: Lowest bids for East River Park construction are $73 million over budget
• East River community group gets action on release of (heavily redacted) Value Engineering Study
• Advocacy group: The city's Value Engineering Study for East River Park does not exist
Posted by Grieve at 7:10 AM

Funny how he can't do anything for poor PS 64 but has no problem illegally ramming through something like this giant, life-altering, decades-long monstrosity. January 1st cannot come soon enough, but I fear it will be too late for the park.

This project will definitely take longer than they are projecting. If it goes forward, East River Park will be shut for YEARS!!!

The fact that De Blasio is for this project is all you need to know! He's a first class dumb*ss.

If this was started years ago it would be done by now.

The people I know who live right there and were flooded are glad this work is getting done. I hope they are being listened to. The decision should be up to the people right there in the projects whose lives are upended and even lost due to the flooding which is only going to get worse.

"The people I know who live right there and were flooded are glad this work is getting done. I hope they are being listened to. The decision should be up to the people right there in the projects whose lives are upended and even lost due to the flooding which is only going to get worse."

Again, this post is a deflection of the true climate change plan that was developed with MAJOR community input which has been tossed aside for this construction union/REBNY horror show of a plan which, of course, has been signed off by Rivera, Chin, Powers, the CC and BdB since they are all bought and paid for by these interests. That a FOIA request was needed to even get even a highly redacted engineering study (a document that was initially said by NYC did not exist) says it all about this totally corrupt boondoggle that will take at least 10 years to complete, will destroy the Park, not provide any protection during it's construction and not factor in any additional climate change projections that will then have to start the whole process over again.

Thank god this is finally getting done. There is nothing worthwhile to save at East River park — it’s a 100 year old shit hole that needs a soup to nuts renovation ASAP. My neighbors dog drowned during Hurricane Sandy. The feds are picking up the tab for this as well because there is never $$ for parks in the LES. Let’s stop protesting everything. This is one thing folks got right — flood protection and a new park now!

So they are finally starting the East Side Coastal Resiliency Project for the estimated cost of $1.45 billion dollars. Very fancy name for what it really is, the asset protection project for LES private real estate developers so they can continue to build expensive apartment buildings along Avenue D and East Houston Street without fear of the next superstorm and of course don't forget about the eventual privatizing of the housing developments along the FDR drive from 14th Street down to Delancey Street.

Let's rip out every living tree and plant to deal with climate change- sounds like a great idea!

There are 2 options here that will totally protect the neighborhood. One involves the total destruction of our park (for probably a decade),the other put a wall along the FDR, and saves the Park. Both work equally well. There is no need to kill this park, except to pave the way for real estate development, which DeBlasio/Rivera seem only too happy to do.

I say we take this Fed money and get this work done now. That water from Sandy flooded a huge part of the neighborhood and it's only going to get worse. We didn't prepare for the pandemic and we haven't prepared for flooding. We got a late start on this and have to get going on it. The people bickering about elements of the plan don't get what it's like to have your building's basement flooded. It impacts everything in the whole building. Elderly people were trapped on the higher floors of all the buildings over there. We need to protect the neighborhood. It makes me crazy when I see celebrities who don't live over on D weighing in on this.

"The people I know who live right there and were flooded are glad this work is getting done. "

Pics Or It Didn't Happen.

If there is any support for this project on the east side of Avenue D it would be very easy for Rivera to use it in publicity. The choice, as outlined in the now unredacted review, is about inconveniencing the FDR Drive, a major source of asthma.

Close the FDR over nights and leave the park alone.

No one is saying don't do anything. Obviously, no one wants another flooding situation. We can save the neighborhood AND the Park if they go back to the original plan, which was to put a wall along the FDR. The only reason this wasn't done is that it cuts out a lane of the FDR (a big source of the high asthma rates in the neighborhood!)during eves and weekends, which is frankly not our problem. Too bad our pols are more interested in representing the needs of commuters more than those of our neighborhood!

11.18 AM, 1.18 PM and 1.47 PM , all 3 of these posts seem to have the same author. All 3 conveniently ignore/deflect the history of this issue which can be found at the various links supplied with what, at least the last TEN stories that the EV Grieve has done for this issue.

"The people I know who live right there and were flooded are glad this work is getting done."

Gotta love this quote. No 'receipts' at all for it. Sorry, when was the last time you were even on Ave D? And it was not just the NYCHA projects that were impacted by Sandy or who use the East River Park. NYU, Bellevue and the VA hospital plus STPCV were also impacted.

I lived through Sandy. I also lived through the first closure of East River Park, which was awful and really deprived our neighborhood of a much-needed green space for years. And now I will have to live through the bulldozing, reconstruction, noise, dust and the loss of hundreds of trees for even more years. This plan is awful--the more you look at it, the more you realize the last thing the city cares about is the health and well being of the LES.

Tear down the FDR drive instead of the East River Park.

I'm excited for this much needed change. I hope the beautiful scaffolding mentioned in a prior article, is used for this vastly welcomed addition and provide money given bsck to the city by means of this development via the community trust partnership.

If I remember correctly, the Feds are only paying $350 million for ESCR. So will New Yorkers pick up the rest of the tab... over a billion dollars?

Come June, vote for the candidate who didn't vote YES for this current ESCR plan!

Okay guy and gals, get your kitten heels on and lets march the f**k out of this!
I will be meeting comrades in Tompkins, once gathered we will de-shoe, only to then surprise everyone when we all see-mull-tane-eee-us-ly whip out our kitten heels in unison bend over put on right shoe, snap back, then bend again and put on left, snap back, then we will briefly bow our heads in a m0ment of silence, For march to RVP will align in a chevron formation with tallest person leading and shortest people trailing behind ensuring the safety of those in front. If there are any little people that would be like to join us, that would be so magical! The littlest one will be dressed as baby liberty and carried to ERP, where there may or may not be a water sacrifice. (bring your waders!)
Keep Calm and March the f**k out of RVP!

Billions of dollars to leak out the side of this one. Look at all the reports already completed. The money is not budgeted for this project. It will never be completed until they get rid of the public housing in the area and then suddenly it will all be finished as the new Ave D DiBlasio luxury houses are put in.

Carlina needs to be voted out. She's using her pretty smile.

This is an inane plan, the wall along the FDR was a much better one. I can’t believe the city is prioritizing not closing a lane of the FDR over closing the park and razing all of the trees.