At the March to Save East River Park 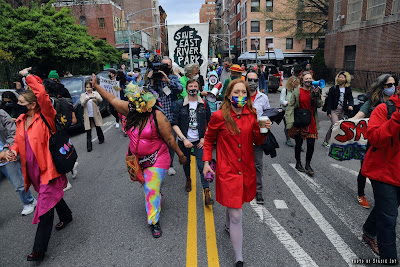 An estimated 500 people turned out yesterday for the March to Save East River Park.
Participants, carrying noise-makers and homemade signs, gathered in Tompkins Square Park and made their way over to East River Park along Avenue B, with a stop outside the Fourth Street office of local City Councilmember Carlina Rivera, who has voiced support for the city's plan to cover the park with eight feet of fill for flood control and cut down 1,000 trees.
The march, organized by East River Park Action, ended at the amphitheater, where there were an array of speakers, including neighborhood activists, several candidates for City Council and Manhattan Borough President and the poet Eileen Myles, who served as emcee. (Recaps at Gothamist and NY1.)
EVG contributor Stacie Joy shared these photos from along the march and in East River Park... 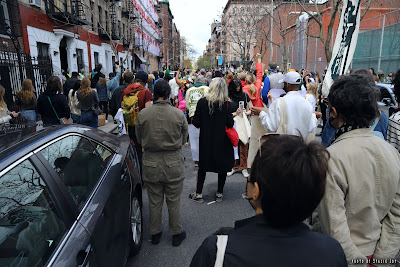 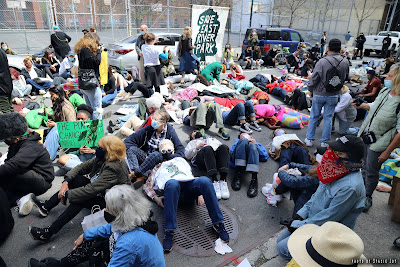 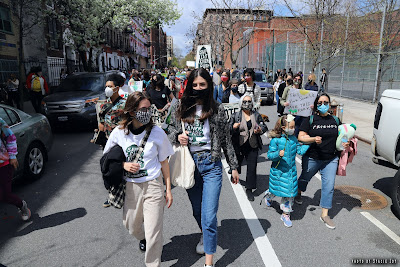 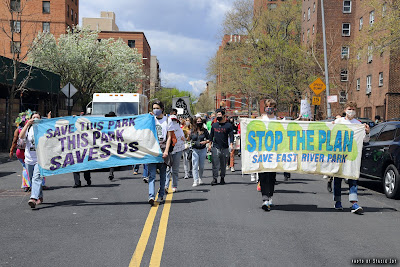 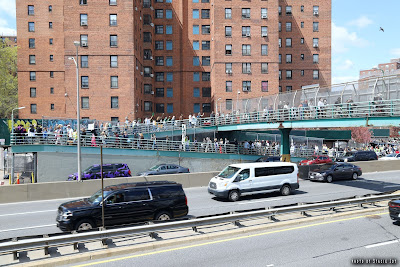 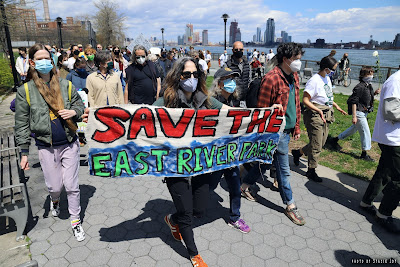 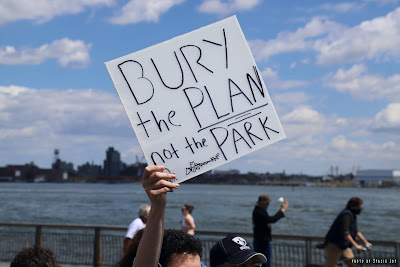 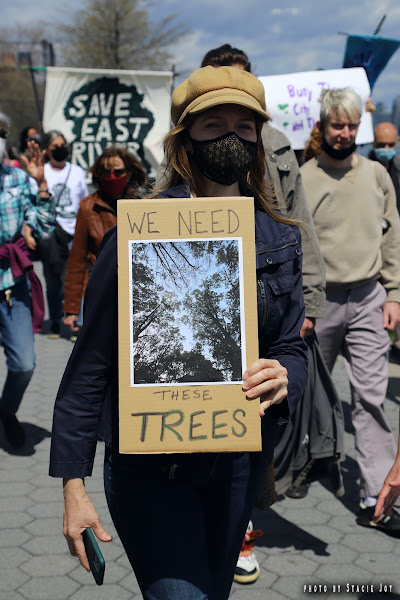 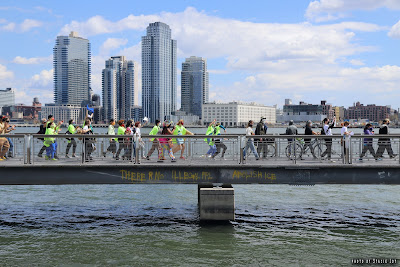 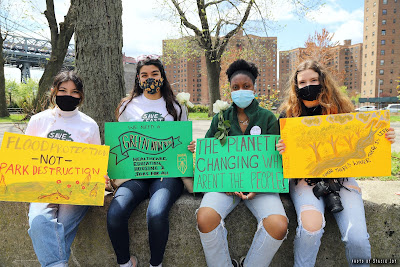 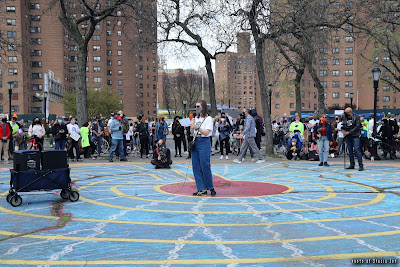 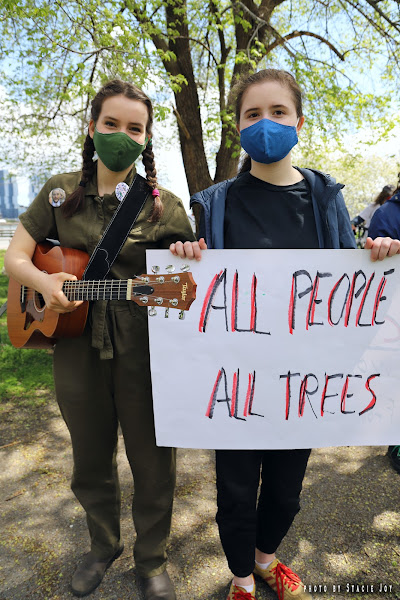 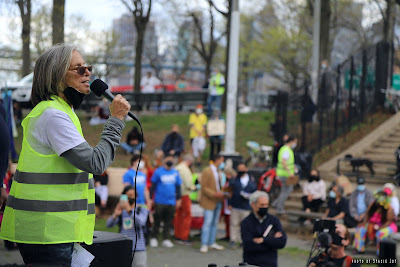 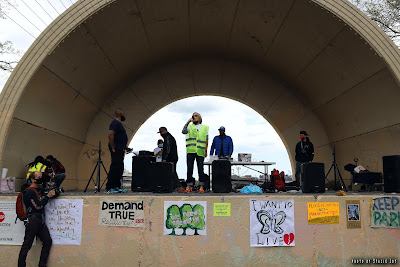 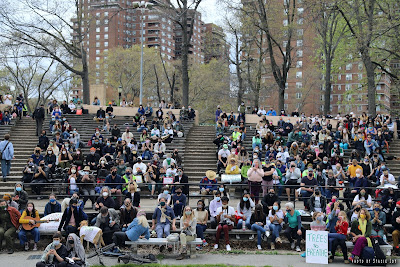 Opponents of the East Side Coastal Resiliency Project demand a "real environmental review" of the $1.45 billion plan to protect the Lower East Side and surrounding neighborhoods from a 100-year-flood event and sea-level rise.
Opponents of the city's current plan — where workers will raze the 57.5-acre plot of land, bulldozing 1,000 mature trees and rebuilding the park atop eight feet of landfill — say there are better ways to preserve the park and provide flood protection, such as the one mapped out in the years after Sandy.
In late 2018, the city surprised community stakeholders by announcing a complete overhaul of a plan discussed over four years of local meetings.
In October 2019, the city announced that they would phase in the construction, so only portions of the park are closed to the public at any given time. According to various reports, the city has committed to leaving a minimum of 42 percent of East River Park open to the public. It is projected to be completed in 2025, a timetable opponents say will never be met.
Meanwhile, the city officially kicked off the East Side Coastal Resiliency Project this past Thursday via an announcement by Mayor de Blasio.
As previously reported, the lowest bids have come in, and they've already exceeded the budget by $73 million, which doesn't cover the entire project. 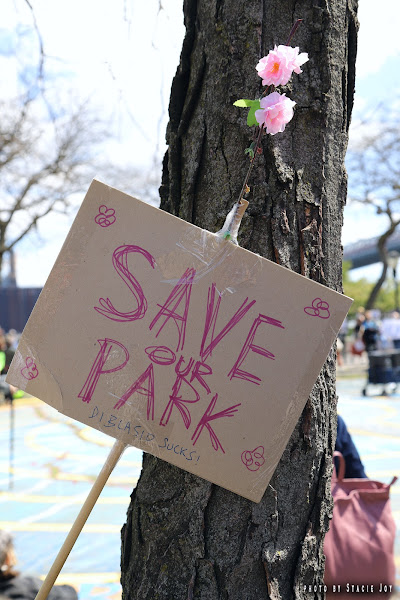 Are there enough local votes to threaten Rivera on this? Her machine is strong but the choice is between the park and inconveniencing the FDR and that should be made clear to all residents, especially east of Avenue B. This is our and children's air we're talking about.

Before the propagandists arrive: The choice is not between flooding and the park, the choice is between inconveniencing the FDR and the park. The FDR is not a commercial highway and emergency services do not depend on it. A pile of dust and dirt for many years as opposed to night and lane closures.

Well put! Rivera needs to be replaced. We need someone who values trees and clean air in our neighborhood over outsider FDR use and developer opportunities.

Excellent the people have spoken!! Now lets scrape this terrible plan and leave the park alone!!!

"Before the propagandists arrive:"

Thanks for this. All too often, the deflections from the usual suspects whose position is that people who are against the current construction union/REBNY/corrupt NYC politician plan do not want ANTHING to be done. As has been noted over again and again, there was a true community based plan that was dumped without warning for this horror show of a plan.

The lack of our local elected politicos at this event was glaring in its obviousness. Despicable.

The casualness with which they treat this destruction and the community loss is sociopathic.

Erin Hussein, who is against this horrible, destructive plan, is challenging Rivera for our City Council seat. I saw a lot of motivated voters from our district. Primaries are notoriously low turn-out, and progressives are trouncing the corporate candidates in the Democratic primaries, so I think that there is a good chance to elect Hussein who also has a good progressive agenda.

Completely agree Anon @ 5:20pm...strawmen abound. So sorry I wasn't able to join this protest in person. All the communication I've had with Council Member Rivera's office on this issue have fallen on deaf ears...or rather, the ears of someone who had long ago made up her mind to support the city's plan, for reasons that seem to fall into that same type of strawman argument Anon @ 5:20pm refers to. I am heartened by the comments of Erin Hussein and hope that she gets the support she needs to bring some sanity to this issue on the city council.

@10:39 PM "sound like a bike activist" That's funny. I have a drivers license but I also ride a bike so I'll wear that badge proudly.

The FDR is not a commercial highway. If you've driven in New York City, well anywhere, you know that lanes and highways are closed for road work periodically. The tradeoff is inconveniencing private vehicle owners and ride share customers with night time and lane closures and permanently diminished air quality for the residents nearest the park (not to mention recreational facilities and green space for all of downtown). Generations will come and go before any trees grow back regardless of when, or if, the job is finished. The Lower East Side already has too much childhood asthma. Condemning multiple generations to aggravated breathing problems to avoid inconveniencing multi-boro commuters during the day and night time ride share customers is not an acceptable tradeoff.

The FDR is only "obviously and important part of the city's transportation network" if you drink in Brooklyn and don't want to spend an extra 15 minutes as the Uber makes its way through Chinatown, you drive daily between Brooklyn and the Bronx - in which case you should learn about the MTA or get used to the BQE - or you are a private vehicle owner on the east side. If so I'm sympathetic, but you avoiding Chinatown or First Avenue doesn't outweigh my child's asthma.

MTA busses use the FDR regularly, mostly express ones. Also, I have had to move aside for emergency vehicles many times over while driving on the FDR. So, save your propaganda.

Though there is an officially sanctioned plan, I have yet to see detailed renderings of what this will look like. The renderings I've been able to find look preliminary, not like finished concepts, reinforcing the notion that this project is shrouded in bizarre layers of intentional secrecy.
What would be the reason for not letting the community view the plan?

Pics or it didn't happen. Far, far more express buses on the avenues. Degriding the FDR is not in any current alternative plan. Temporary closures. I doubt it would hang up your (imaginary) firetruck at 4 am with 1st Ave wide open.

Curious why there are always posters in these threads that are so passionate about the FDR drive. Like are you also big fans of the LIE and the Cross Bronx? Or is the passion for the existing boondoggle and if so, why?

From the post above "What would be the reason for not letting the community view the plan?" Why indeed?

You are also mistaking advocacy for propaganda, but maybe that's because you couldn't work "privilege" in (this time?)

Where are the East River Park mature trees are going?
Are they being sold?
https://www.wsj.com/articles/the-newest-status-symbol-for-high-net-worth-homeowners-trophy-trees-11619109066
"He’s since transported hundreds of trees using the technique. He said cutting the trees vertically, leaving each piece with a portion of the root and foliage, transforms them into separate organisms. While the bark around them grows back as one, inside they are effectively separate living trees."

"...The tree became a defining feature of the property, which has since sold for $29 million."

If the city is planning to remove 1000 80 year old trees at East River Park, how about re-planting those mature trees around NYCHA buildings and throughout the lower east side to protect residents from FDR Drive pollution and park destruction?

Where is Rivera? another consequence of elections. As she prepares push to be speaker don’t forget about this betrayal.